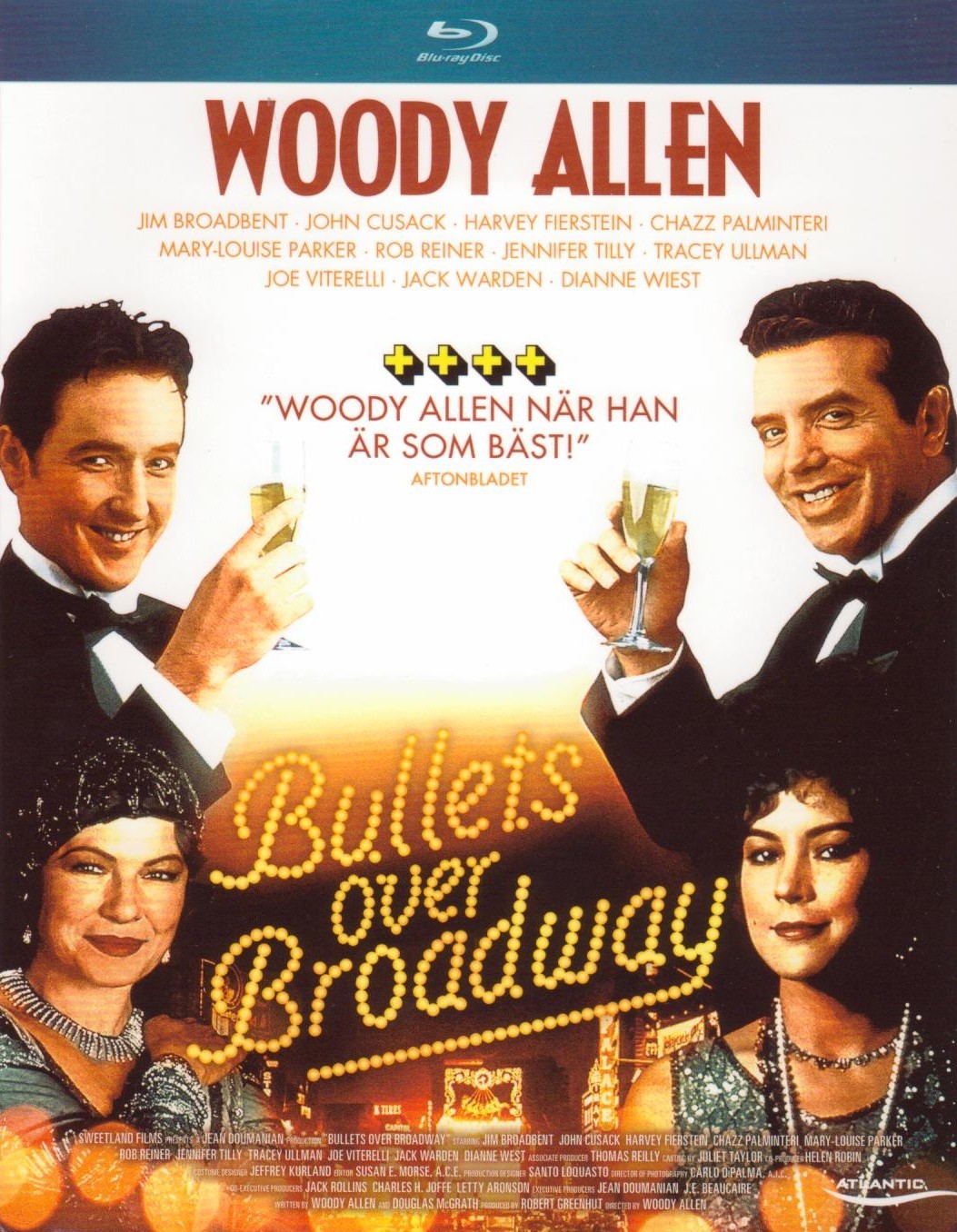 In the spirit of full disclosure I must confess I am a Woody Allen fan. I was a fan of his stand-up comedy, and was delighted when he moved into making motion pictures. His brand of humor was stamped on Take the Money and Run, and Bananas. Love and Death was a satire on bleak Russian novels, among other things, but it was Annie Hall that set what a Woody Allen film would look like.

In Bullets Over Broadway, David Shayne (played by John Cusack, whose hairdo and wire frame glasses bring to mind George S. Kaufman, where the comparison ends) is part of a group of socialists in Prohibition era New York who pretend they are artists. His pretense is that of a playwright, as is Sheldon Flender’s (Ron Reiner) who takes pride in the fact none of his twenty plays have been produced. He poses a question not answered until the end of the film. Is a work of art worth a human life?

Shayne demands to direct his new play. He does not want God of Our Fathers to be misinterpreted by those other directors, the fate of his two previous flops.

Shayne has no talent, but when has that ever been a roadblock to success in show business? His agent, Julian Marx (Julius Marx was Groucho’s real name, and one of Woody’s idols), played by the ever reliable Jack Warden, has found an Angel, Broadwayese for financial backer, in one Nick Valenti (the mere appearance of Joe Viterelli, who plays him, says MOBSTER). He will foot the bill for Shayne’s God of Our Fathers, but with one proviso, and an ancient one at that: a part for his ditsy, chorus line girlfriend, Olive Neal, played by the vivacious and ebullient Jennifer Tilly, a character struck from the same mold as Judy Holiday in Born Yesterday.

Olive fancies herself a actress and harpies Nick into demanding a part in the play,if only to shut her up. Shayne, considering hisself a whore to agree to the casting, must go along. Also cast is theater diva Helen Sinclair , a sort of Catherine Cornell type, who is in desperate need of a hit. I do Electra, I do Lady MacBeth, I do plays by Noel and Phil Barry, or at least Max Anderson. (Note to Matt: these are not “obscure playwrights”).

Nick knows Olive far too well to leave her unattended with theater folk, so assigns one of his torpedos, Cheech (played with easy grace by actor/writer Chazz Palminteri), a man who lives by a roll of the dice, to watch over her. He is in the theater when rehearsals begin, and endures Shayne’s pedantic dialogue. Nobody talks like that, he tells Shayne soon after. (Today’s Screenwriters, please take note.) “People believe what they see when the actors sound real”, Cheech says.

Cheech has an ear for dialogue and an instinct for drama, and soon becomes a collaborator on the play. David must accept that he really has no talent, and Cheech is a man with a gift, a true artist.

In the midst of all this, Olive begins an affair with a fellow actor, and Shayne with Helen Sinclair. Shayne starts a production journal, with which he provides voice-over narration.

Unbeknownst to Shayne, his long suffering girlfriend Ellen starts an affaire with the dilettante playwright, Sheldon Flender. John Cusack to Rob Reiner: the ways of woman’s heart are indeed mysterious.

There is little for Woody’s editor, Susan Morris, to do in this film. Almost every scene is a Master Shot, running the length of the scene. No cutaways, no close-ups. He may move the camera into a two shot at times. Woody Allen is one of the few directors who understands the nature of cinema. Comedy, especially Black Comedy, is broad and he keeps his camera slightly divorced from the action. A close-up is to isolate a character from the action, almost removing him from the narrative at times. No character is isolated from the comedy here. The visual translations are seamless. The actors enjoy high energy and are very well rehearsed. The dialogue is snappy, witty and the selection of old timey songs recalls the time. Woody Allen’s version of a Lubitsch touch.

Shayne accepts that Olive, who can not act or even remember her lines, must remain in the cast. Cheech can not tolerate her ruining his play. He drives her to the docks and removes her from the opening night performance, as well as the rest of her life. I think you should know this. You’re a horrible actress, he tells her before pulling four slugs in her. Off camera of course, after all its a comedy.

Mob boss Nick Valenti suspects Cheech bumped-off Olive and orders him taken care of. The gunsels follow him to the theater on opening night and gun him down backstage. With his dying breath he gives Shayne a final line of dialogue making the play perfect.

The play opens with Olive’s understudy in her role and the show is a smash hit. Shayne is the toast of the Great White Way. It is a bitter sweet success, however. He is not an artist, after all.

He asks Ellen to marry him as they walk off arm in arm on the way home to Pittsburg.

In a bit of irony, the gunshots that brought down Cheech are thought to be part of the performance.