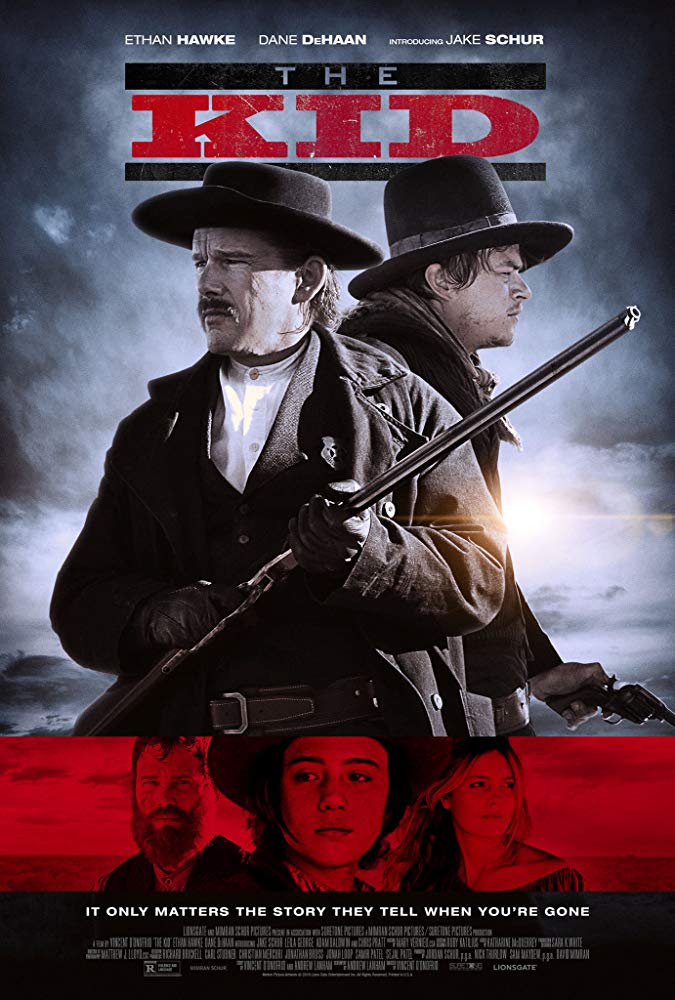 A young boy witnesses the encounter between Billy The Kid and The Sheriff.

We are in familiar territory here.

The story of Billy the Kid has been told several times. Sam Peckinpah’s Pat Garrett and Billy the Kid suffered from confused story with actors too old for the characters they played. Kristoffer Kristofferson was 37 and looked 47, far too old to play the 21 year old Billy. Bob Dylan looked like some guy who wondered onto the set while the camera was rolling.

Emilio Estevez presented a lively version of the kid In the Young Guns films, in addition to presenting the Lincoln County War as a conflict between English and Irish immigrants.

Vincent D’ Onofrino’s The Kid is a more bare bones telling of a familiar story. The Kid here is Rio Culter (Jake Schur), a young teenager forced to kill an abusive father in a vain attempt to save his mother’s life. He and his sister Sara(played by Leila George), flee the murderous rage of his Pa’s brother, Uncle Grant, and head for what they believe will be the sanctuary of Santa Fe.

They spend the night in a shack at the soon to be infamous Stinking Springs. Rio awakes to see the image of Billy the Kid in the famous 1880 photograph, standing in the doorway. His days as a Regulator in the Lincoln County War are behind him. He and his gang are simple rustlers and horse thieves. Any chance of a lawful life betrayed by Governor Lew Wallace’s false promise of amnesty.

Billy, as played by here Dane DeHaan is full of rustic charm, and he charms Rio. You can see why he had so many supporters among the common folk. Some of them, anyway.

Sheriff Pat Garrett’s posse surrounds the place and gang member Charlie Boudre is shot full of holes when making a brake for the horses. Billy concludes discretion is the better part of valor and surrenders to Garrett (played by Ethan Hawke as an experienced detective who has seen too much). Rio relates a flight of fancy that he and his sister were separated from their Pa but will meet up in Santa Fe ( Sara had convinced Rio he would hang if he told the truth). Garrett has doubts about the story but takes them along.

In Santa Fe Garrett is forced to commandeer a stage coach to get the Billy back to Lincoln for his hanging after the local sheriff (played with beefy intensity by D’ Onofrino) demands justice be carried out in his jurisdiction. His neck will stretch just as well in Santa Fe as in Lincoln as punishment for the misery he created.

Rio and Sara find Uncle Grant waiting for them. Rio is thrown into the street and Sara is shipped off to a whorehouse.

This is the first film about Billy the Kid portraying his popularity with the Mexican people. Not because he was an outlaw, but because he treated them as equals, a rarity in that time and place.

Billy is locked up in Lincoln to await his appointment with the hangman. Rio arrives thinking Billy can help him find Sara. He gets himself shot attempting to get into see him. As it turns out, Billy has no interest in helping Rio. The romantic view of the outlaw departs, like so many illusions of the young.

Much of what follows we have seen many times before. Billy kills deputy James Bell and escapes while Garrett is off collecting taxes. He kills deputy Bob Olinger and high tails it to Pete Maxwell’s place to see his girl. Garrett follows and shoots him.

Most Billy the Kid films end here. Rio enlists Garrett’s aid to rescue his sister. A shootout, Grant is killed and Sara saved. After confessing to Garrett, Rio and Sara embark on a new life with the sheriff’s aid.

Rio is Billy’s double. The person he was before following the outlaw trail. Garrett gives him the chance Billy never had. Confession cleans his soul and he is forgiven.

D’Onofrino’s direction is solid but unremarkable. More television than cinema, but he gets good performances from his actors. The story never quiets come together, although he gets the point across. The pace is slow.

I liked this film a lot more before I sat down to write about it. I had to actually think about what I saw, and my good opinion suffered for it. I hope D’ Onofrino get another chance to direct again, but he best avoid a setting for which he has so little affinity, the West.