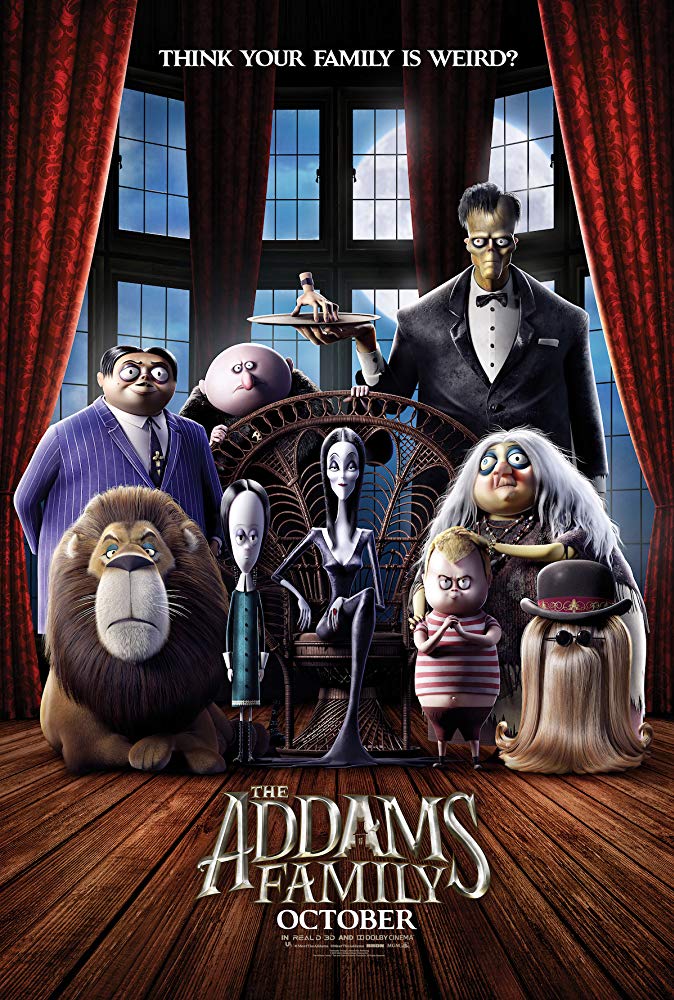 The Addams Family, probably the way it was always meant to be seen.

As usual, my son is providing the meat of the review of new, animated, The Addams Family movie. But this one has a slight twist – his grandma and grandpa are asking the questions. Buckle up folks. Also, he gives lots of SPOILERS, but I doubt any kids are reading this.

Have you ever seen the old TV show The Addams Family?
Yes, I’ve seen it.

In this Addams Family, is there a hand called Thing?
Yes, there’s a thing.

Is there a normal person who isn’t scary?
Yeah.

Does she have a name?
I forgot her name. Even if she did have a name.

What did you like the best about this movie?
Very best…

Something that made you laugh or you could relate to?
I think the best part – actually, I don’t know.

The best part for you.
Ohhhh. For me. When Wednesday made the frogs come back alive.

Who is Wednesday?
You don’t know who Wednesday is?! She’s the same girl from the old tv show.

If I remember, there was a father and a mother and a brother and sister and an uncle and another big guy.
Yeah, Lurch.

Who was the Uncle?
Uncle Fester.

What did you enjoy about Uncle Fester?
That he threw bats everywhere and that he told the furniture lady “I just tooted.” And there was a toilet lady, that she sat on the toilet backwards, but the furniture girl secretly put video cameras on everyone’s house to secretly watch them.

Oh. So they were trying to get rid of the Addams family?
They helped them rebuild the house and lightning struck the house and turned it back to the old way the house was. First, the house was abandoned and then they moved in. And there was a big sound in the house like ERRERRRREERRRRR.

Did you say frogs?
Yeah, Wednesday made the frogs come alive in junior high.

Were they her friends?
Maybe.

What changed the town’s opinion about the Addams family?
They thought what they did was pretty rude, but the furniture lady didn’t think it was rude. But the other people did and helped them rebuild the house.

And the Addams family lived there happily ever after?
Yeah. Sarcastically.

Which Addams family character did you not like the most?
Well, I liked Lurch. My least favorite character was…the old grandma – the really tall-slash-short grandma. She was wearing a dress that made her look really tall, but she came out of the dress and was really tiny.

Was there anything the hand did that you remember was funny?
When Lurch was trying to play on the piano, bud-du-du-duh, but the hand kept going *fart noise, thumb’s down*

Do you think the Thing could help you with your music practice?
What if the Thing was our music teacher?

What was it?
Lurch.

What was the most amazing, magical thing that happened?
When the lightning struck, it turned the mansion back to its old version.

Was the movie scary at all?
Not really. But it was good for kids. Kids liked it.

Was it scary, kid fun?
Fun for kids, but not for dads and parents. They were kind of bored. They took their kids to the movie.

Did the mom and dad make the kids in the movie behave?
Oh yeah, I remember part of it. The boy, Pugsley, was on a like a rocket thing and the dad was like “you need to do your sword practice. Last warning!” And the kid went up in the rocket and blew up. Then he was in a parachute and he landed on the ground and did his sword practice.

How did he do his sword practice?
He just swung his blow up sword.

Did Morticia look like a vampire?
Yeah, but there was technically a vampire, like Uncle Fester was kind of a vampire. Who is Morticia?

She was the mom.
So just call her the mom please.

And she wore black dresses?
Yeah. She wore a dress that had squid tentacles that helped her move.

Well, we don’t have any more questions.
We have to do the rating.

Rating: The movie is better than ten dollars because it’s at least twenty-five dollars. If it was longer it would be more. One last thing – bud-du-du-dun *snap, snap*