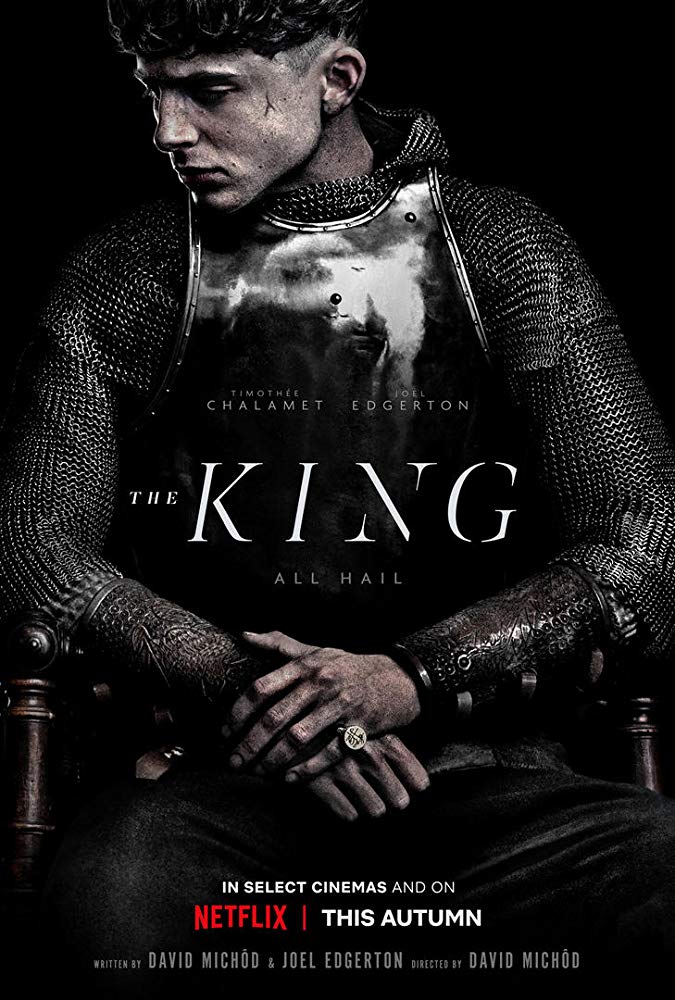 The young king, crowned by Henry V must manage politics, war, and other issues

I brought two prejudices to watching The King, the new film about England’s Henry V. This was Shakespeare’s Henry V, and the Henry V of history. The King is not Shakespeare, and is certainly not history. It is however, a mildly enjoyable film.

In the beginning, the film has Prince Hal or Harry, the future Henry V, fight the rebellious Hotspur in single combat like Achilles and Hector, after a long career of drinking and whoring. Even his father thinks he looks like death warmed over. He is a sickly looking boy. The youthful Timothee Chalamet plays the youthful Henry. While a fine actor, he lacks the oomph we saw in Henry as played by Laurence Olivier, Kenneth Branagh and most recently Tom Hiddleston in The Hollow Crown. His slender frame, especially his skeletal looking arms, make it seem unlikely he could swing a broadsword in battle with any force for any length of time.

Hal upstages his younger brother Thomas, who had put in his bid for kingship with the old man and would lead the army at the Battle of Shrewsbury, while his father lay on his deathbed back in London in 1403.

The Henry IV of history was a usurper and rather a shit, it should be mentioned. After Hotspur killed more than a few rebellious Scots while in his service, finally he had enough. Raised an army and went out looking for the shit.

“O Harry, thou hast robbed me of my youth,” were Hotspurs last words according to the Bard. The colorful Hotspur was not despatched by Hal in the Battle of Shrewsbury, but met his end with an arrow through his neck in midst of the battle. Oh, ignoble death! King Henry IV did in fact fight bedside his son and heir, Henry the Prince of Wales at Shrewsbury in 1403. Neither one of them killed Hotspur.

Henry IV lived until 1413. In The King he dies shortly after Shrewsbury. Henry V is roped into war with France soon after he assumes the throne. Now, I am not that good at math, but if Henry IV died in 1413, that would be… hmm, three from three is ,an zero, and zero from one is one, so … yeah, that’s ten years, more or less. I get it, they were counting on a viewership of Millennials educated in American public schools, where history is largely ignored.

The drunken party animal Sir John Falstaff, Prince Hal’s mentor in debauchery, is resurrected from his spot under a table in the Boar’s Head Inn and appointed military marshal to the crown. The fact that Falstaff existed only in Shakespeare does not concern us here. He is the most interesting character in this drama, played with a quiet confidence by Joel Edgerton. He is not Falstaff as played by Orson Welles, that’s for sure. He is a clear minded tactician, an experienced soldier who knows good ground .

The every intense Sean Harris, the crabby punker geologist who loved rocks in Alien Prometheus, and a bad-guy in not one, but two! Mission Impossible movies plays Sir William Gascoigne, the Chief Justice of England. He role is considerably expanded from history. He is an Eminence grise.

The Dauphin, a classically obnoxious and superior Frenchman who puts on airs, makes an appearance in the battlefield in The King, when in fact he remained with his father, Charles VI, in Rouen. The smarty pants got what was coming to him in this movie.

The nasty business of medieval combat is the main feature of The King. It seems more a violent, muddy riot than what we have seen in other war films, with he exception of Branagh’s Henry V. It is curious no one used a shield. There seems to have been a lack of hair care products for kings and their ministers also.

After opening a can of whup-ass in the Frenchies at Agincourt, Henry returns to England, where he finds out he has been a George Bush to a crafty Dick Cheney. Seems to be a message here. Well, you know what Sam Goldwyn said about Western Union and sending messages in movies.

I missed the St. Crispan’s Day speech Shakespeare gave us. Henry the King’s speech just before the battle was, well, lackluster.

The guy who directed and co wrote this King, a couple of his selections for, are your ready? “the greatest films of all time” (ignoring the fact all time is not yet here) are The Assassination of Jesse James by the Coward Robert Ford, and, I am not making this up, The Thin Red Line. The first being one of the dullest films ever made, and the latter, had maybe something to do with the James Jones novel of the same title. Although this version was pro Japanese, the bunch we were at war with in World War II in the Pacific. You usually expect an American filmmaker not to support Imperial Japan.

I liked The King until I thought about it.

If you are interested in seeing a good film about Henry V and Agincourt, watch Kenneth Branagh’s Henry V.