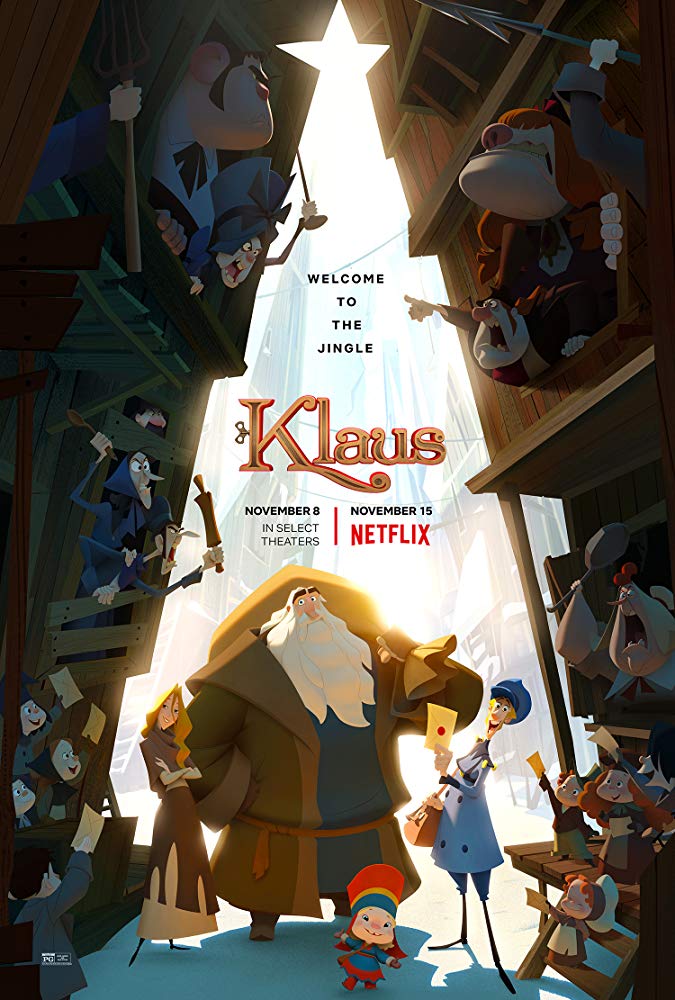 In the frozen outpost of Smeerensburg, a postal cadet tries to bury hatchets and install a new tradition

I do not particularly care for animated films, super hero films, or comic book films. However, as my Christmas Movie stocking is about empty, I could not ignore what was apparently yet another Netflix Christmas movie. So, I moved to my living room, made a small fire in the hearth, and fired up Klaus on the big screen for maximum effect. I can say with total enthusiasm that I was not disappointed.

Jesper is the lazy son of a wealthy Scandinavian, and was shipped off to the Postal Academy to learn an honest trade. This entitled and cunning lad takes full advantage of his situation, and makes a mockery of the Academy boot camp, slacking and goofing off at every turn. His furious father has had enough, and threatening disinheritance, ships the recusant adult kid off to the remote and hopelessly gloomy Smeerensburg. There he must sink or swim, and is charged with either delivering 6,000 letters, or getting the boot from daddy.

Smeersburg is gray, dark and icy cold, as it is virtually at the end of the earth. Its inhabitants had long ago lost all motivation and focus, except for a centuries old violent feud between the two warring tribes, the Krums and the Ellingboes. The community is in crumbling disrepair; the Post Office had been commandeered by chickens as a icy coop, and no letters had been delivered from there in years. The task seemed hopeless, but Jesper was highly intelligent, motivated and resourceful. Here is where the story really begins.

Before I go on with any more plot details, let me just say that this animated film was gorgeous and is destined to become a Christmas Classic. I don’t know who Sergio Pablos is, but he did a stunning job with the 2-D animation and a near-perfect story. He seamlessly folded in concepts from other Christmas tropes and films without being overly sentimental or obvious. Most notable was homage paid to the greatest Christmas animation ever, the 1966 version of How The Grinch Stole Christmas.

As the movie progresses, we see a tiny light of hope in the dark tunnel of a community that long ago lost its way. Jesper is on a mission and he tackles his mission with a relentlessness that has a lot of positive unintended consequences on the other characters in this movie. Alva is a schoolteacher who had given up all hope, quit teaching the kids, and resorted to being a fishmonger to try to earn enough money to get out of Smeersburg. The other central character was, of course, Klaus. Klaus was a huge, imposing woodsman who was terrifying, but made toys as well, and carried a crushing grief and sadness.

As the movie goes on to its inevitable conclusion, I’m sure that most of you can guess where this is heading. Or can you? There are plot twists and turns, but none of them seem forced or predictable. The main thrust of the film is that “a true selfless act always sparks another” and we see this town, hopelessly mired in war, bigotry and centuries of tradition, emerge from the darkness. It is the children, of course, who lead the way, and education and literacy are the key.

I must mention another key character in this beautiful film. Margu, who is a cute little one foot tall Sami. These are the native “Eskimos” of Scandinavia who live in primitive tee-pees and dress colorfully. She can neither read, speak or write anything but her native language, but her dreams and persistence provide the catalyst for the breakthrough that Jesper needs to accomplish his mission.

I cannot emphasize enough what a beautiful animated film Klaus is. The 2-D animation is about the best I’ve ever seen and the dark, gloomy and angular setting of the city is perfectly offset with the depth and magic of the woods in Klaus’s domain. This is not really a Christmas movie in the traditional sense. I don’t think that the word is even mentioned until near the end of the film. As this delightful and soon to be classic was coming to its conclusion, I wondered how the ending would be handled. I will just say that it was about as perfect as it could be. It was not sappy, not overly sentimental, predictable or overly indulgent.

This is yet another winner from Netflix. This effort brings a uniqueness that is so refreshing in the predictable, safe and lame genre of “Saving Christmas”. This movie does not save Christmas, but it creates it, and creates it in a way that is highly believable and satisfying.

10.0/10.0 With The Goatesians Seal of Approval and Rating of Must Watch for a Christmas Classic.