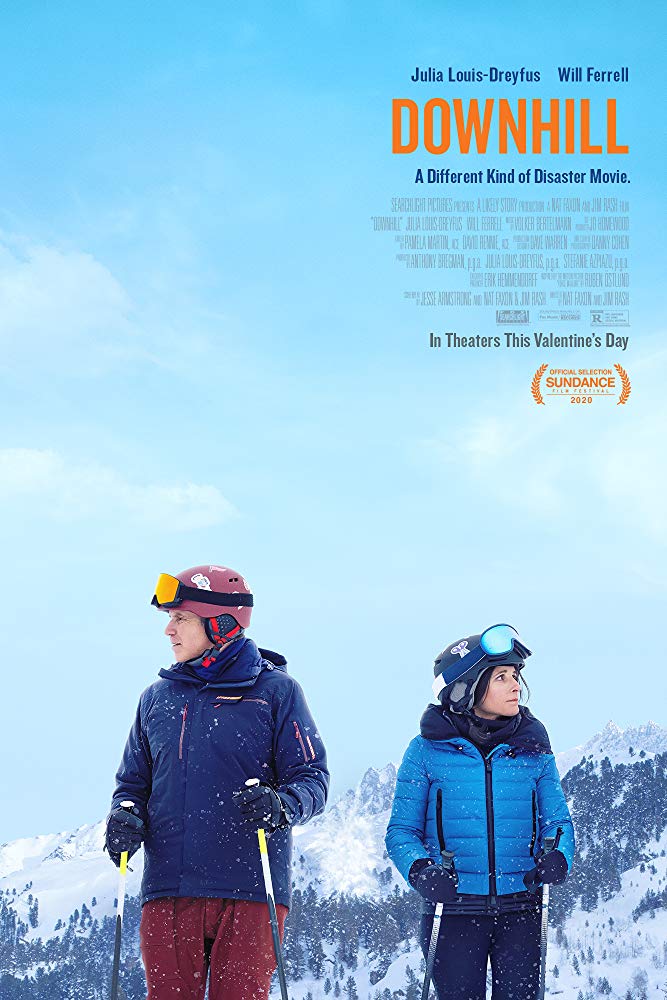 A family goes on a ski trip and there is nothing about that.

The advantage in avoiding all trailers for a movie is that you do not know what is coming. Unfortunately, that is also the danger. What little I knew going into the screening of Downhill was that it starred Will Ferrell and Julia Louis-Dreyfus and was about a family on ski trip. IMDb categorized it as a comedy/drama, so, naturally, I went into the theater expecting a comedy. Because, of course I did. Everyone did. Plus, it opens on Valentine’s Day and what better movie for a date night than a fun family ski comedy? As it turns out, literally every movie would be a better option for a date night than Downhill. Upon the end of the film, my immediate thought was “it’s a good thing I don’t take notes during screenings because mine would have been a suicide note.”

As soon as the studio name appeared on the screen, I knew I had made a horrible mistake. Fox Searchlight, for those of you who aren’t familiar with them, is the arthouse arm of 20th Century Fox (or was, now that both are owned by Disney) and does not make the standard, low-brow comedies typical of Will Ferrell, like Anchorman or Talladega Nights. When they make comedies, they tend to be subtle, quirky, or even dark comedies like Super Troopers, The Way, Way Back, or Jojo Rabbit. Then, the movie confirmed it by starting with a wide shot of the French Alps while playing quirky music of the type that has never been heard in a Will Ferrell movie outside of Stranger Than Fiction. Definitely not the hallmarks of what one would call a funny romp.

The short of it is Downhill makes Marriage Story seem like a festival of joy. Ferrell plays Pete, a husband and father of two middle-school aged boys, on a skiing vacation with his family. The audience is immediately made uncomfortable by the family as they try to pose for a picture at the top of a ski run, bickering with each other as a Frenchman snaps photos. I know – hilarious, right? Well, the majority of the film is this scene over and over again, just in different locations. Eventually, we learn that Pete and his wife Billie (Dreyfus) are having marital problems, but we are never told what those problems actually are. We just see the culmination of Billie’s anger and Pete’s emotional absence brought on by…years of having to look at each other’s stupid faces? Too much device screen time? Whose NBC show generated more money?

To put it another way, Downhill’s entire purpose seems to be to make the audience as uncomfortable and awkward as possible. Pete is a depressed Clark Griswold doing everything he can to avoid the confrontation he knows is coming. The entire trip was his idea to spend time with his family without taking his family into consideration. He pushes them to hit the slopes every day, invites a work buddy and his girlfriend (Zach and Rosie, respectively) to stop by their hotel for dinner, books them at a resort for adults instead of the nearby family resort, and even books an excursion to be helicoptered to the top of a mountain despite one his sons clearly not able to ski terrain that difficult. I know – hilarious, right?

The awkwardness continues when Billie snaps on multiple occasions and none of them are fun to sit through. One is during the helicopter scene when they can’t find one of the kids’ gloves, followed by another scene featuring Billie and Pete screaming at each other in front of Zach and Rosie (after the family has a close shave with an avalanche). It is every point in your life when two people argued with each other in front of you, but times one thousand. And that is before we get to Charlotte (Miranda Otto), a kind of hands-on concierge who was so pushy and obnoxious Billie would have been forgiven had she pushed Charlotte off the chair lift. Based on all of this, it is no wonder that Dreyfus comes off as if she is a hostage forced to be in this film.

Thankfully, this travesty only lasted eighty minutes (despite feeling like nine hours). Thirty minutes in and I was ready to walk out. It takes a lot for me to want to leave a movie early and having to sit through fifty minutes after hitting my threshold was excruciating. Not only was the movie not a comedy, it was devoid of anything even resembling humor. Yet, for reasons that defy humanity, a handful of audience members were laughing during parts of the movie. To be clear, it was not as if they were laughing at attempted jokes; they were laughing at parts that were clearly not intended as jokes. I don’t know if it was nervous laughter or they have a condition like Joaquin Phoenix’s Joker, but it made an uncomfortable experience that much more awkward. I can only assume they were trying to make the best of a date gone horribly wrong.

Rating: Ask for all of your money back and give it to whomever agreed to go with you.