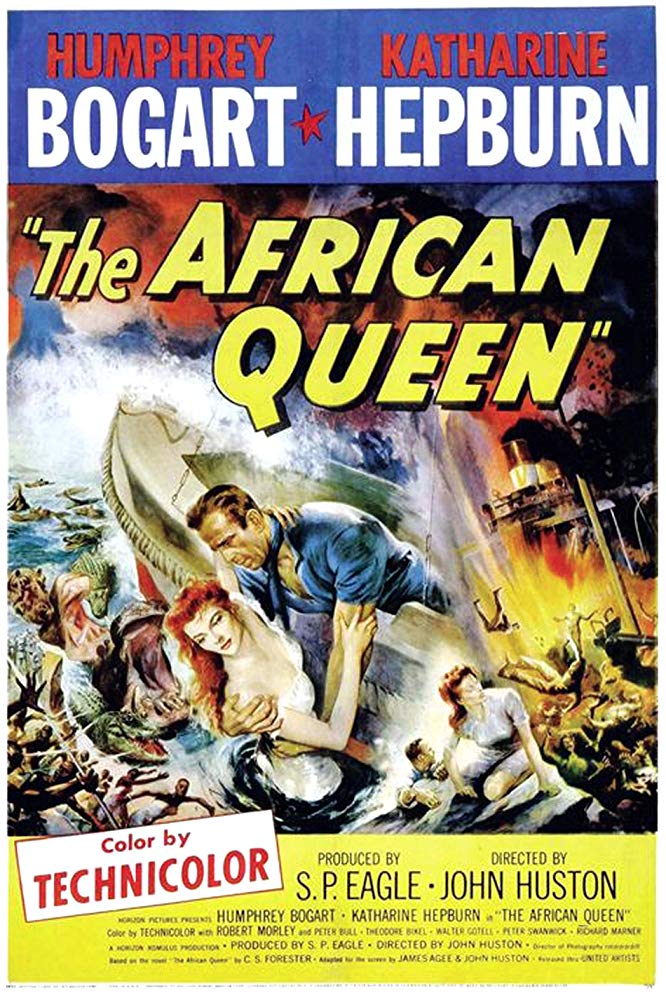 Here at Ruthless, we are famous for 80’s Action and Christmas Movie Reviews. One genre that is seriously underrepresented at Ruthless is the classics. Movies with dialogue that pops and sizzles, and with great acting and character development. The African Queen is one of my favorite classics and stars two of the greatest actors to have ever lived, Katherine Hepburn and Humphrey Bogart. This movie is based on the C.S. Forester novel, and is one of the most widely viewed films ever made.

The African Queen was not shot in the comforts of a Hollywood studio, no, John Huston shot this beauty in hot, steamy, buggy and primitive Africa, and it really shows. Sure, the animal shots were stock clips, inserted into the movie, but no matter, these clips were quite effective in drawing the viewer into the unforgiving jungle.

We have the jungle, the river, the boat and two human characters who are as different as they can possibly be. Charlie Allnut is a swarthy, grimy river rat who brought supplies and mail to a remote missionary post in primitive Africa. He’s a one-man crew, a loner who drinks, smokes, bellows and curses. Rosie Sayer is prim, prissy, virginal, an over-dressed spinster who was puritanical and deeply religious. These two opposites are thrown together by fate and face a treacherous journey out of the jungle.

What in the world do these two have in common, you might ask if you haven’t seen the movie? World War I had erupted, and the Germans burned out the missionary post and native dwellings. Rosie was forced to flee with Charlie on the tiny African Queen, after her brother, the Preacher, succumbed to a heart-attack after the German invasion.

I can’t imagine anyone who has not already seen this movie, so there will be Spoilers Ahead. In the boat and on the river is where the story really begins, and the character metamorphosis is quite amazing. Once on the boat, Rosie embraces her situation as a patriotic adventure and duty, and demands that Charlie build torpedoes to strike back at the Germans. Charlie reluctantly agrees, with no intention of keeping his word. Charlie just wanted to ride out the war with his Gordon’s Gin and his boat, but Rosie would have none of this.

In one of several pivotal scenes in the movie, Charlie really ties one on and with drunken bluster tells Rosie that he will not go down the river to confront the Germans and that she is just a “crazy, skinny old maid”. Yes, there is Hell to pay for this as the next morning Charlie opens his gin-swollen eyelids to an incredible scene. There will be no more drunken outbursts, as Rosie has dispatched all the Gordon’s to the river. He is horrified to see dozens of empty bottles floating behind the boat. This scene was brilliant, and exemplified the steel reserve of Rosie. Then came the silent treatment, and for Charlie it was worse than death by 10,000 leeches, but things soon change.

Charlie shaves and caves to the increasingly powerful Rosie as they proceed down the river to survive harrowing rapids and even more harrowing German fire from an outpost. Rosie is all-in for white water boating and Charlie is all-in for Rosie. After surviving yet another encounter with the rapids, Charlie “Hip-Hip-Horrays” and flings Rosie’s church hat into the river, a powerful symbol as they embrace and kiss for the first time. Thing will never be the same.

The journey to the sea gets even more arduous, but this is not your typical Hollywood romantic couple here. They are an inspiration with their teamwork and dedication to each other and their now common mission. What we have here is two cinematic giants playing off of each other perfectly and giving the performances of their lives. Humphrey Bogart won an Oscar for his performance, upsetting Marlon Brando. O.K., the premise of these two sinking a German Boat was ludicrous, but I didn’t care. The payoff and interaction with the crew of the Louisa was absolutely priceless.

“I now pronounce you Man and Wife….Proceed with the executions!”

There are no weak links in The African Queen. The acting and dialogue are some of the best you’ll ever see, and the editing and cinematography are outstanding. It is the near-perfect combination of an action movie and a love story, with a bit of comedy thrown in for good measure.

10.0/10.0 With the Goatesians Rating of a Must Watch Classic Movie