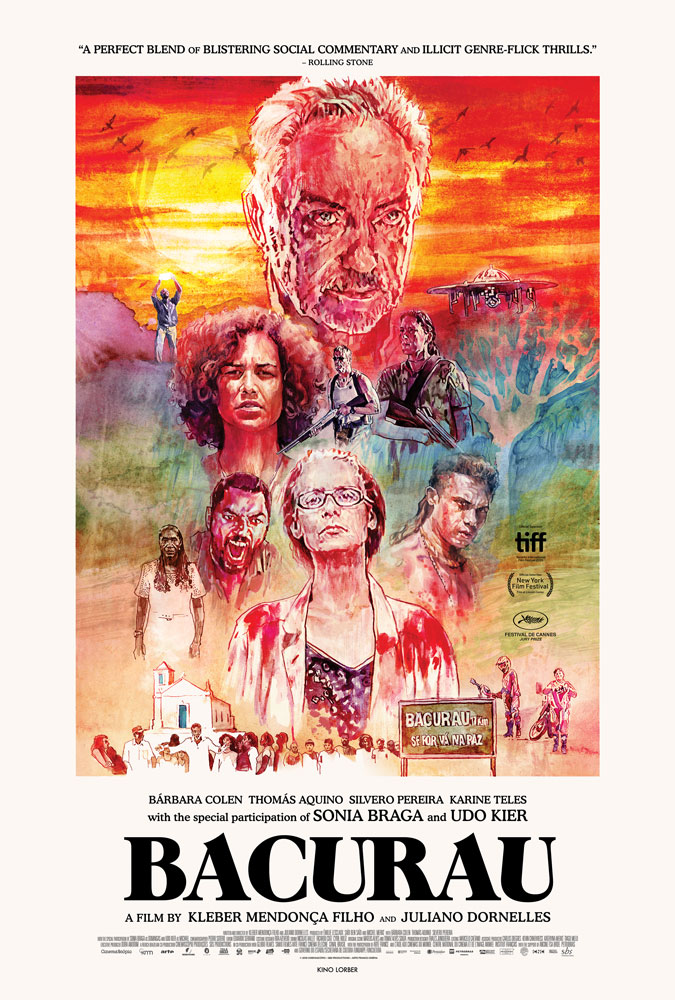 Bacurau is a new Brazilian genre film with a spaghetti western/pulp feel to it.

Bacurau is a film that hides like the fictional town the film is named after. Small and vibrant, the town is filled with sweat-stained faces and interesting characters. Shot in tight close-ups and extreme wide-angles (in the style of a Sergio Leone spaghetti western), Bacurau takes its time for almost an hour. Directors Juliano Dornelles and Kleber Mendonca Filho of Brazil, create almost a travel log of Bacurauian life.

The first half of the film mainly consists of village funerals, outdoor town meetings, and nightly deviant escapades of the townsfolk. There are also visits by a corrupt and despised local mayor who refused to distribute the region’s water. These moments are seen by many characters, but mainly through the eyes of the three leads; Barbara Colen, Thomas Aquino, and the magnificent Sonia Braga. She is remembered fondly from the atrocious buddy movie The Rookie, a film with Clint Eastwood and Charlie Sheen. This film goes along like a western but has dashes of grind-house pulp and even science fiction. Yes, hiding beneath the layers of quiet and simple life in Bacurau is the year’s most thrilling and blood filled genre film.

Bacurau has simple story, the villagers in a small town must defend themselves from violence. This is a twist on The Most Dangerous Game, the film’s last hour is filled with chaotic carnage, gunfire, gangs of man hunting assassins, machetes, and decapitations. After teasing us with the eerie simple life, Dornelles and Filho hit the gas and drive the film into a demented gore fest. This stark change midway through the film comes when legendary B movie actor Udo Kier literally bursts into frame.

Kier brings his cult movie reputation with him, changing gears and pushing this film into the gleeful and bananas exploitation film it becomes. Bacurau, like last year’s Parasite and Dragged Across Concrete, intelligently plays with political undertones and societal class statements. Although at the end of Bacurau, it’s much easier to say who the victors are.

One thing is for sure though, within the last three years, this film and the others that I mentioned above (except, of course, Parasite) have assured me of the place that genre film has in today’s industry.