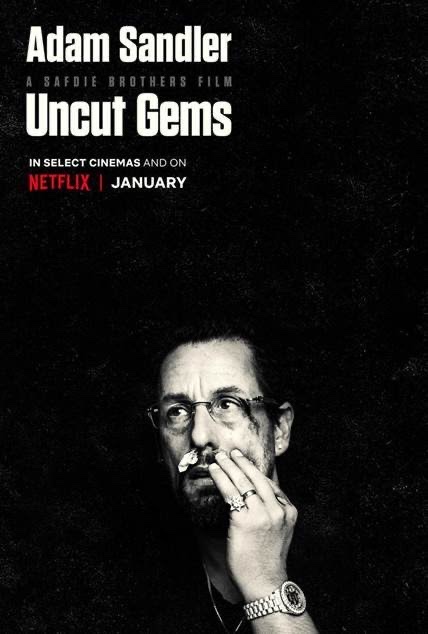 From acclaimed filmmakers Josh and Benny Safdie comes an electrifying crime thriller about Howard Ratner (Adam Sandler), a charismatic New York City jeweler always on the lookout for the next big score. When he makes a series of high-stakes bets that could lead to the windfall of a lifetime, Howard must perform a precarious high-wire act, balancing business, family, and encroaching adversaries on all sides, in his relentless pursuit of the ultimate win.

The Safdie Brothers have now cemented themselves as the newest auteurs of their generation. I usually hesitate to use the word auteur but to hell with that because it’s true. Uncut Gems has all the staples of a Safdie film. Razor sharp and profanity laden dialogue, a retro synth score, psychedelic and paranoid depictions of New York City life and most importantly; a nerve wracking, against the clock and nail biting approach to storytelling.

I was lucky enough to get tickets to an early encore screening at the New York Film Festival in October where I met one half of the directing duo, Benny Safdie, and saw the film months in advance which is always special. But enough on that, here are my thoughts.

With each Safdie film I’ve seen, I feel like I’ve sweated off three years. Not since Sam Peckinpah, has a filmmaker, or in this case filmmaker(s), put you through the wringer as much. With their earlier feature Heaven Knows What (2014) and the highly acclaimed a24 film Good Time, the Safdie’s have created highly intense original cinema that I feel audiences have been craving for. Now, with their newest film Uncut Gems, the Safdies still haven’t ditched their fondness of intense and city set style; in fact, they’ve doubled down on it. Uncut Gems is one of the most frantic and uncomfortable films I’ve ever seen.

The story is very personal to the brothers, Josh and Benny, who have been developing the story of Howard, a jeweler in the diamond district, for just about ten years. Howard is played with a pulsating energy by Adam Sandler in a career best performance (step aside Punch Drunk Love and the Meyerowitz Stories). It would be impossible to praise Uncut Gems without a mention of Sandler’s unhinged performance. Howard is the newest entry in a long line of insane and self-destructive characters in the Safdie catalog.

Just like Robert Pattinson’s Connie Nikas in Good Time, Sandler’s Howard Ratner is a man that just seems to make all the wrong choices and we just get to sit back (or on the edge of our seats) and watch them screw up. The Safdies throw everything at poor Howard. Constant threats from loan sharks and criminals pestering him for their money, being thrown out of a coked up party with The Weekend, getting his most valued opal rock “taken” by NBA star Kevin Garnett and being thrown into a fountain after being punched in the nose.

Everything goes wrong for Howard. All these moments are like a line of dominoes. And yes, by the end of Uncut Gems the line of dominoes will all topple down. It’s the haunting image of Sandler’s face, after an hour of getting beaten and mentally pulverized, with bloodshot and blackened eyes, dried up blood, caked up around his nose as he grins at the screen with a maniacal sadness. It’s so hard to feel bad for this man. He knows he’s digging his own grave with only a 1% chance of climbing out and winning. Yet, he’s perhaps the most sympathetic character in the film.

While Adam Sandler is the anchor, the film is backed up by stellar performances. The budding character actor Lakeith Stanfield and debut’s from Julia Fox and Kevin Garnett (surprisingly excellent) make a lasting impression.

What I found very interesting about Uncut Gems was the work of cinematographer Darius Khondji. At times, the camera was placed hundreds of feet away or perched up in odd locations, making me feel even more distanced from the film as it dove right into madness. Scenes that would be usually shot in a medium close up here were captured in an extreme wide and this created a whole new atmosphere that made it distinct from other films being released today.

Like in Good Time, Oneohtrix Point Never composed the film’s score. He seems to perfectly understand the Safdie’s aesthetic. His score retains the jittery synth style of Good Time but this time around it seems more akin to Vangelis at times. In a way, the music reflects the film itself; Uncut Gems is the most operatic film the Safdie’s have made. Obviously their budget is larger than their previous efforts but the scope of the film is doubled. The music would fit futuristic skyscrapers and hovering cars but here it’s played over the grimy streets of New York.

It’s no wonder Martin Scorsese is the executive producer here. Uncut Gems embodies the style Scorsese made so famous in his heyday (although is he even out of his heyday?). Uncut Gems joins the ranks of films like Mean Streets in its gritty portrayal of city life and how it allows us to observe first hand the violence inflicted by and upon its characters. In fact, I’d say Sandler’s performance as Howard recalls glimmers of Robert De Niro’s performance as Johnny Boy, the ill fated but lovable hoodlum up to his knees in debt. He’s a likable and charming man who just lives in the moment, making every wrong choice as they come, hurling at him. I have an affinity for Johnny Boy just like I have an affinity for Howard. By why, god why are they the way they are?

Rated R for violence, strong language, and brief sexual content. Also lots of gambling and synthesizer music that will give you a heart attack.