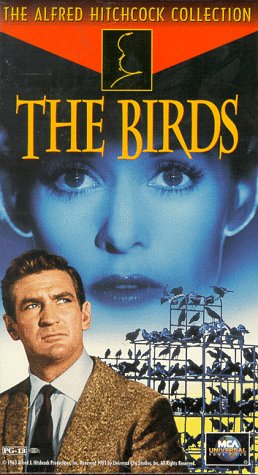 In his excellent nonfiction book Danse Macabre, Stephen King posits that the horror story is essentially conservative, a chronicle of the battle between Apollonian and Dionysian forces. These are the Light and Dark sides of the Force, respectively, if you prefer that terminology (obviously it is not only horror stories that utilize this formula). The Apollonian are the forces of the rational, order, and self-discipline, while the Dinoysian revels in decadence and chaos, the sensual and spontaneous. In the horror story especially, the Dionysian often takes the form of some Outsider or Other who invades the Apollonian tranquility.

In Alfred Hitchcock’s wildly influential 1963 film The Birds, this Dionysian Other takes the form of Melanie Daniels (Tippi Hedren), and her perceived promiscuity and decadence will be punished throughout the movie by the divine onslaught of the titular avians, which reinforce the desire of Mitch Brenner (Rod Taylor) to tame her into the Apollonian fold. Melanie seems to sense this impending punishment from her very introduction in the film, when she smiles appreciatively at the human “wolf whistle” of a passerby (though it purposefully sounds much closer to a tweet), then looks up at the seagull-darkened sky, her smile fading, as if knowing her retribution is coming.

Melanie shows an effortless second nature for deception and manipulation as she instantly, and seemingly without thought or purpose, slips into the feigned role of pet store employee to flirt with Mitch on what she believes to be their first meeting. Ah, but Mitch already knows who she is, and he is merely watching with a grin as she hangs herself with the rope he gives her. Melanie’s reputation precedes her, you see, and not in a good way. He has previously seen her in court over a broken plate-glass window, the result of some unnamed “practical joke” she perpetrated. Furious at being fooled when she was merely engaging in a pleasantly pointless deception, as is her wont, Melanie clocks Mitch’s license plate and tracks him down via a phone call to the unseen Charlie at her father’s newspaper office. Their one-sided conversation hints that this is far from the first time she has manipulated poor Charlie for her own gain.

Throughout The Birds, men are more than happy to go out of their way to help Melanie in any way they can (all except Mitch, which is what makes him interesting to her). We get the strong impression that Melanie is quite used to getting anything she wants at any time. Even Annie Hayworth (Suzanne Pleshette), an old flame of Mitch’s, responds to her in this way, whether because Melanie has such great power in this regard or for Ms. Hayworth’s own, more sapphic reasons, it is difficult to say. At any rate, with information gleaned from Annie and another eager-to-please shopkeeper in the Apollonian enclave of Bodega Bay, Melanie is well on her way to a cute little comeuppance for Mitch that involves breaking and entering, espionage, and oh so many more lies.

Having only met Mitch hours before and knowing nothing more of his mother, Lydia (Jessica Tandy), than what she has heard from Annie and the shopkeeper, Melanie hesitates not a whit to sneak into the woman’s home, leaving a smug note for Mitch along with the lovebirds he originally came into the pet shop to buy for his sister, Cathy (Veronica Cartwright). She then hurries out to her waiting boat to spy on Mitch with binoculars as he discovers her crime, but Mitch spots her and races to the dock to meet her. It is then that Melanie’s divine retribution begins, as she is the first to be attacked by the birds when a gull swoops down to snatch at her scalp, wiping the arrogant smile off her face and replacing it with blood.

In Mitch, Melanie has met the ideal Apollonian man, a lawyer (“Criminal!” he replies emphatically when Melanie asks what kind) who wants to see “practical jokers” like her behind bars. He seems to have some attraction to this criminal element, in a “gaze long into [the] abyss” sort of way, that manifests in his attraction to Melanie. The bars he wishes to put her behind are the metaphorical ones of the proverbial ball and chain. He is the one who can tame her Dionysian nature, their courtship essentially a romantic prosecution, their later romantic scene on the hilltop (before the birds attack Cathy’s birthday party) a cross-examination (or interrogation, since he is the only one “examining” her), their presumed eventual marriage to be the sentencing.

If Mitch is the ideal Apollonian man, Lydia Brenner is his feminine counterpart, the protective Mother figure who wishes not to change the wicked Dionysian interloper, not to rehabilitate, but only to keep it out at all costs, to protect the sanctity of the home. She is a “no woman good enough for my son” type, and she now faces her ultimate challenge in Melanie. From their first meeting, Lydia radiates hostility toward Melanie (almost as if she knows Melanie has recently broken into her home!), which we later learn is due to her own knowledge of Melanie’s reputation. As Lydia grudgingly allows the interloper into her home for the first time (to her knowledge), Mitch mentions that there’s something wrong with the chickens they keep, who have stopped eating. “There’s nothing wrong with those chickens!” Lydia snaps, her severe gaze falling briefly on Melanie, as if she already knows it is Melanie who is the problem, not the birds.

After lying and manipulating (of course) her way into a room at Annie’s place, Melanie accepts a telephone invitation to Cathy’s birthday party from Mitch, despite her reservations about Lydia’s obvious disapproval. At this moment, a seagull kamikaze dives into the door of the house and flops dead onto the porch, like an omen of Mother (Nature) showing her furious disapproval. At Cathy’s birthday party, it is immediately after Melanie confides to Mitch that she was abandoned by her mother that the birds first attack, as if the Mother force (Lydia) is violently rejecting the surrogate motherhood Melanie seems to long for in this vulnerable moment. Rejecting, too, the growing attachment Mitch feels for the Enemy Woman, the Other. Mitch is of the newer Apollonian guard, a New Testament type who believes in turning the sinner to a saint, while the Old Testament Mother figure is far less forgiving, only wanting to cast the Other out, or destroy it if it comes to that.

Later, in the diner sequence (it looks like a diner, anyway, though it also has a fully stocked bar) the elderly ornithologist, Mrs. Bundies (Ethel Griffies), and the Drunken Doomsayer (Karl Swenson) represent opposing ideological factions. Mrs. Bundy believes birds “bring beauty into the world” and would never harm people. The Doomsayer, true to his name, thinks it’s the end of the world coming, a divine retribution from an angry God. Once again we see the split between the New and Old Testament ways of thinking. The Traveling Salesman (Joe Mantell) represents a third faction, the desire of Man to have control over Nature. “Kill them all,” he says of the birds. “Messy animals!” It is he who ultimately blows himself up with a carelessly tossed match in a puddle of gasoline, a victim of his own hubris. Before they attack, the gulls flying overhead seem almost to be laughing at the destruction below.

In the film’s most overt declaration of its themes, a Hysterical Mother (Doreen Lang) in the diner gives voice to the pervasive feeling of the town of Bodega Bay and lashes out at Melanie. “They said when you got here, all this started,” she shouts. “Where did you come from? Who are you? What are you? I think you’re the cause of all this! I think you’re evil! Evil!” Here we see the Apollonian fear of the Outsider once again, and Melanie begins to learn her lesson, as we see in the subsequent scene in which they find the slain Annie at her house. Mitch moves to avenge her death by throwing rocks at the watching birds perched all around them, but Melanie stops him, maintaining the peace as the birds allow them to drive away with the traumatized Cathy in tow.

The birds are not finished with Melanie, though, as they brutally attack her in Cathy’s upstairs bedroom at the Brenner home in the climactic sequence, just to make sure she gets the point that her decadence and constant mendacity will not be tolerated, not here. After this final brutal attack, the birds only menacingly watch as Mitch carries out his/their plan of taking Melanie back to the Dionysian city of San Francisco where she belongs, out of the Apollonian Bodega Bay, only pecking at him a few times along the way to keep him in line.

Hitchcock was at the top of his game by this point in his career, and The Birds was probably his most technically innovative work to date, but all of these innovations are in service of masterful storytelling. From the opening credits sequence, which simulates a bird attack on the viewer with its silhouetted birds flapping and squawking across the frame, the movie is ruthlessly effective in its approach. Its use of rear projection and other technical effects combined with practical ones must have been as big an influence on filmmakers like Steven Spielberg as its sense of pacing and suspense-building clearly was on Jaws. Likewise, the sequences of people trapped in diners or homes, fearing and fighting against an onslaught of vicious attackers, seems like a precursor to the zombie movie (and of course all the other When Nature Attacks movies that came in its wake) in the same way Psycho anticipated and influenced the slasher genre.

Beyond all that, though, it is the thematic richness that makes The Birds resonate nearly sixty years later. We might run with the fundamentally conservative approach of the horror story as I have done here, and blame Melanie for the attacks as the Hysterical Mother does, but what really frightens us on the deepest level is the randomness of it, the terror that it could happen again, that we will never truly know the rhyme or reason of it all. Worse, that there is none. As the great graphic novelist Alan Moore famously said of conspiracy theories, we “believe… because that is more comforting…. The truth is more frightening, nobody is in control. The world is rudderless.” We hold onto the ideals of the Apollonian and Dionysian, or whatever other stories we need to tell ourselves to avoid the true shock and terror of that scariest idea of all: that it really is all just chaos.