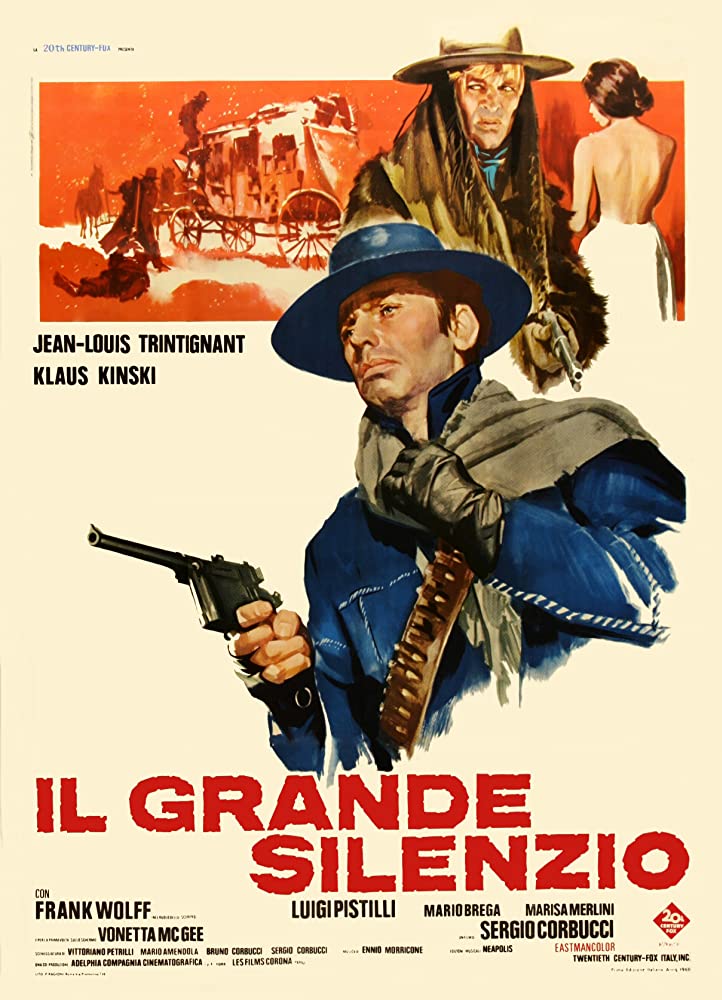 Having recently seen the gorgeous remastered Film Movement version of this bleak and bloody masterpiece, I can only say; The Great Silence is the greatest Spaghetti Western not directed by Sergio Leone.

While I know that Sergio Corbucci was always more bleak and violent than Leone, nothing can prepare you for this film’s absolutely gut punching ending. It is visceral and heart-wrenching. While Corbucci’s Django was quite violent compared to Leone’s Dollars films, they still maintained the same energy and bouncy feeling. The Great Silence is a never ending somber death rattle.

This is Sergio Corbucci’s magnum opus. What a disgustingly dark and brutal film! I love Jean-Louis Trintignant’s character Silenzio. Cast against type in a reverse Eastwood role. He literally cannot speak. And where Blondie had some charm and wit, here Silenzio is the silent gunslinger with a biblical presence, reaping vengeance. He has a menacing and angelical sense to him.

Playing like a long and winding fable, the film features one of maestro Ennio Morricone’s finest scores. Its sadly quite underrated. His music is like an ancient, tired story of sadness and mourning, yet at times, it switches to nerve jangling rattling at the entrance of Klaus Kinski’s charming yet sadistic Loco (called Tigrero in the Italian version). The music is perfectly matched with perhaps my favorite opening credits to any film.

I always thought westerns really reflect the time they were made in. The old Ford and Wayne collaborations really reflect a white and male America. The Spaghetti Westerns, on the other hand, reflect a changing America, even though they were made in Italy and Spain. They reflect counterculture, love, violence, themes of anti-establishment and government and had an overall bleak view on the world. That is especially applied to the films of Corbucci. His Zapata Westerns (The Mercenary and Companeros) told the tales of revolutionaries, long haired men with unshaven faces smoking cigars, overthrowing oppressive leaders.

These were films that mirrored what our own culture actually looked like. It is shown, clear as day, in Vonetta McGee’s character in the Great Silence. She is the first Black woman in a western. I cannot think of another. Her appearance in this film is completely unorthodox yet completely fitting. Corbucci even films a prolonged interracial love scene.

More so than his Italian counter parts (Sergio Leone and Sergio Sollima), Corbucci was a director that mirrored that political climate of his time. Leone had his operatic nostalgia. While completely reinventing the game, he held a sentimental lens to the grand epics of John Ford and payed homage. Corbucci took it all down with thunderous strides. In The Great Silence, the opera of Leone is mostly gone and replaced is a venomous symphony.

But if none of that can persuade you to watch this masterpiece, watch it for Luigi Pistilli’s magnificent coat. Damn…what a coat.