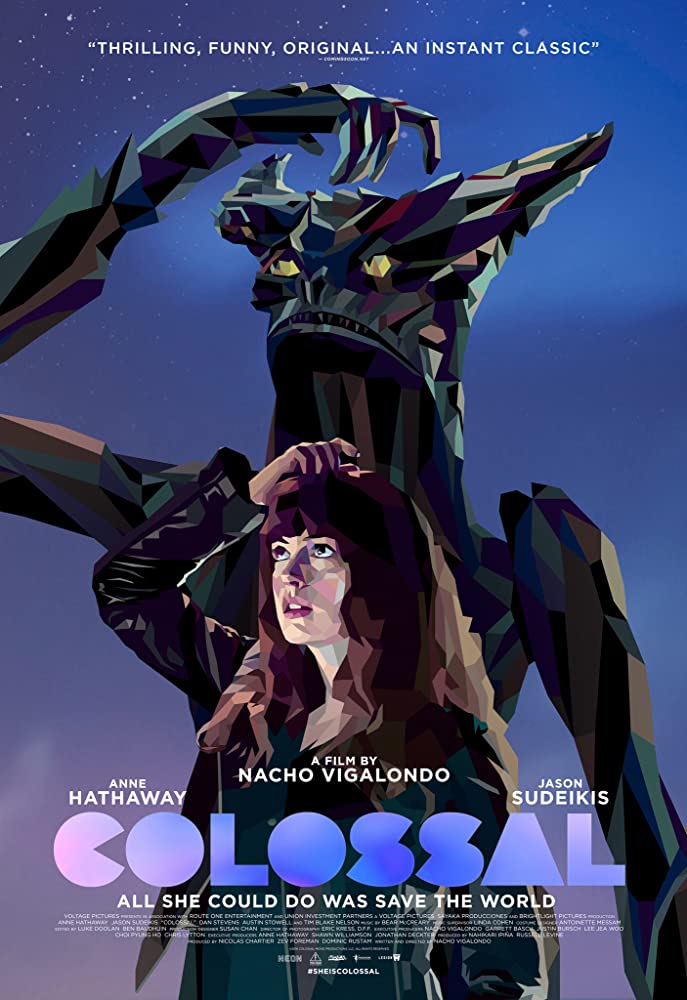 Fair Value of Colossal: $1.00. It’s a light, weird and unique comedy that’s watchable due to a talented cast.

Toxic Relationships through the lens of Kaiju: Gloria (Anne Hathaway) is a day drinking Manhattan party girl who is abruptly dumped by her boyfriend Tim (Dan Stevens) and left with nowhere to go but her parents’ home in New England.

It seems that she is landing on her feet when her old childhood friend Oscar (Jason Sudeikis) gives her a job as a bartender, but that just leads to her drinking until the morning. And stumbling drunkenly through a playground.

And the next evening, the news reports how a giant monster rampaging through downtown Seoul, it’s motions and antics exactly the same as Gloria’s.

What’s Good about this film? There’s a way that director Nacho Vigalondo (Timecrimes) seems trying to reckon some point between Guillermo del Toro’s love of monsters and Edgar Wright’s comedies of maturation and genre satire. This is a strange film about dealing with alcoholism as told through giant rampaging monsters.

What’s bad about this film? Vigalondo fails to display the deep genre literacy that lend charm to Del Toro’s and Wright’s films. The characters are under-developed. The cast is three actors, the jokes peter out rapidly, and Hathaway and Sudeikis are left floundering to keep the film going.

Honestly, Colossal feels like a first draft- there’s a great concept, but the characters remain sketches, the scenes never doing enough to really establish who Gloria is other than an alcoholic.

Who will like this film? People looking for a relatively novel comedy.

Who won’t like this film? Fans of giant monster movies will find the satire and parody of the genre to be non-existent. Which is a shame.