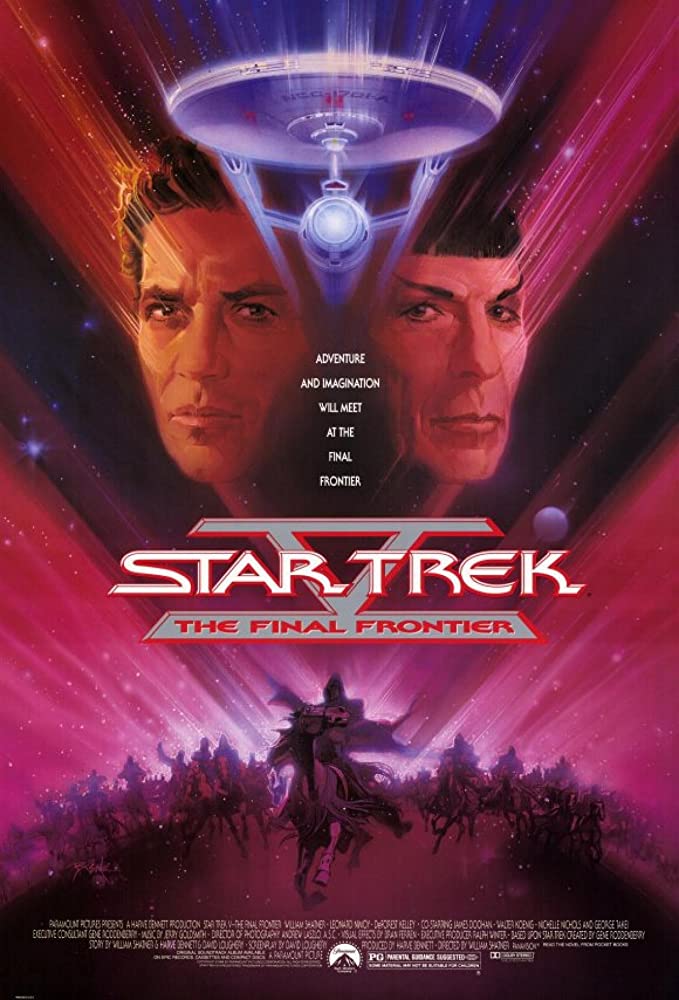 Where no one should ever go again.

(Side note: his head is going to explode when we get to the bunch of episodes featuring Klingon society.)

As far as the films go, Star Trek V: The Final Frontier features plenty of Klingon action, including actual Klingon language. Unfortunately, it also features a lot of really bad movie. Look up any list ranking the Star Trek films and The Final Frontier is the only film consistently in the bottom three (strangely, none of those lists agreed on any other movie consistently being bad). Even my son remarked that it was “yeah, not good” after watching it.  Which is saying something coming from the kid who is trying to perfect the jump-fart.

There are a number of reasons one could point to for The Final Frontier as being the worst film in the franchise. A look at the box office numbers supports that on its own, finishing behind only Nemesis in lowest gross sales (albeit on half the budget, making it far less a financial loser than Nemesis). It was release following The Voyage Home, which itself was the conclusion of three really good movies that can only be described as a trilogy. I would say The Final Frontier is the worst trilogy follow up, but we live in a world where Indiana Jones and the Kingdom of the Crystal Skull exists.

Box office aside, the quality of the film speaks for itself. Right off the bat, we’re asked to believe that fifty-eight-year old William Shatner (Captain James Kirk) cannot only free climb El Capitan, but does it often enough to consider it a casual way of relieving stress (as he informs a rocket-boot-clad Spock floating next to him while he clings to the cliff). I have seen Free Solo and I am confident that a near-sixty-year old in dubious physical condition whose main occupation is starship captain could not free-climb the most daunting cliff-face on Earth. Nor would he have the time to hone the skills required to attempt such a feat.

This scene also treats us to the first look at the film’s atrocious special effects. While engaging in a conversation with Spock during the climb, Kirk slips and plummets to his seeming death, only to be saved in the nick of time by Spock. The background during the fall looks like something out of the 1960s, Kirk clearly suspended while a green screen simulates a rock wall flying by. There are many, many more scenes in the film that look (and sound) this bad, from the Klingon bird of prey firing its guns to the false god appearing almost identical to the Wizard of Oz’s disembodied head to the Enterprise’s engine problems sounding like a 1976 Chevy Vega. And this cannot be explained away as a product of 1989 since the previous movies had substantially better effects despite being older. Halfway through the film, I told my wife there was no way that Industrial Light and Magic (ILM) was responsible for this travesty and a quick internet search proved right (ILM worked movies two through four, but were too busy working Ghostbusters 2 and Indiana Jones and the Last Crusade to commit to The Final Frontier). Turns out the company they hired was most known for its work in Little Shop of Horrors and nothing more needs to be said.

Then, there is the tone of the film, which is best described as schizophrenic. Think Bozo the Clown meets David Koresh. On one hand, we get a stream of silliness ranging from a round of “Row, Row, Row Your Boat,” to Chekov and Sulu getting lost in the woods, to Uhura doing a desert striptease, to a brand new starship falling apart as if it was built by the Acme Corporation. On the other hand, we have a cult leader named Sybok hypnotizing people by showing them their pain (which makes no sense on any level, nor is it even explained to the slightest degree), using them to achieve his goal of literally finding God (Sha Ka Ree to the Vulcans). On the surface, that last sentence sounds as funny as the rest of the film, but there are also people in this world that take their religion so seriously they think Harry Potter books contain actual witchcraft. Speaking of magic…

The Final Frontier is easily the least sciency of this science fiction franchise. God is the plot. Specifically, finding God, but God. Science requires verifiable evidence, which religion has exactly none of, unless we’re counting pancakes. Thus, The Final Frontier is just space fantasy and if Star Trek fans wanted pure fantasy they would watch Star Wars.

(Yes, I know that The Voyage Home, often considered the best film of the franchise, though not tops on my list, features time travel and repopulating Earth’s whales with just three specimens. It still isn’t God or space wizards.)

The problem with the God story is The Final Frontier does not commit to any real narrative or point. The entire film builds toward Sybok convincing everyone except Kirk that God exists, then taking the Enterprise to God’s planet. Then, they find what they initially believe to be God, only to grow suspicious when God asks for their starship and shoots Kirk and Spock with lightning bolts from His eyes. Kirk immediately decides that this is not God because he apparently has not read the Old Testament. After escaping the planet, Kirk states that while the being on the planet was not God, God was still looking out for them. Given that Kirk was rescued by Spock and a bunch of Klingons, this is either utter nonsense or Spock and a bunch of Klingons are Gods. Then again, Spock did rise from the dead. Hmmmm.

To make matters worse, no explanation is given for what the being on the planet actually was. Sybok maintains that God was talking to him and told Sybok where to find him. This being was an actual thing, so how exactly was it communicating with Sybok from across the galaxy? We also know the floating head was not an illusion like Oz because Sybok literally grapples with it. As I said, we have literally zero evidence of the existence of God and this being behaves much like God of the Old Testament, so how do they so easily convince themselves the being is not God? Because God wants to hitchhike with them? Rather than attempt to address this question, the film tries to distract us with Sulu and Chekov horning out over a Klingon female’s guns. I told you – this movie is schizo.

In the end, the film turned out to be nothing more than a test of our patience and a test of what Star Trek fans are willing to sit through. The film had a chance to start a real conversation on the existence (or not) of God (or gods) and how humanity perceives God, but chose to avoid any and all tough questions in favor of bad special effects, a heap of slapstick, and nonsense like the Mad Max world where we first meet Sybok. It’s also worth noting that this was William Shatner’s directorial debut (as well as being largely responsible for the awful story), which begs the question “did he ever actually watch Star Trek?” Or just Star Wars?