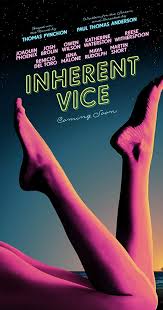 Larry “Doc” Sportello, a well-intentioned but inept stoner, hippie and private investigator in 1970, is embroiled in the Los Angeles criminal underworld investigating three cases interrelated by the disappearance of his ex-girlfriend and her new wealthy boyfriend.

The following review of Paul Thomas Anderson’s Inherent Vice will be much like the movie; A dizzying melange of scrambled thoughts and points that wrap up quite nicely depending on whom you ask. Has there ever been such a poorly marketed movie? I’m not talking about trailers making movies look fantastic when they end up looking like dogshit. I’m talking about a movie trailer that completely falsifies the entire tone of the movie and makes it look like a fun 70s romp comedy mystery. While being these things, the movie actually behaves a little differently.

Inherent Vice, arguably Paul Thomas Anderson’s least popular and most underrated film, was released in 2014 to positive raves from critics. However, there was divisiveness, confusion, and disappointment from most movie-goers. Inherent Vice lacked the concise and intense character study of Anderson’s previous films such as The Master and There Will Be Blood. Neither was it as energetic or wildly entertaining as an energy fueled film like Boogie Nights. I think the difference with Inherent Vice is that it absolutely detested having a plot. Anderson adapted the film from Thomas Pynchon’s book by the same name. Pynchon could be considered the king of incomprehensible and dense literature. While Anderson kept the same trippy feeling in the book, he clearly was more interested in love and loss rather than Pynchon’s fascination with the culture of the late sixties and early seventies.

he film (barely) follows private detective Doc Sportello (Joaquin Phoenix), as sort of half-assed mutton chopped Philip Marlowe, an odd fellow and lovable stoner. One day, Shasta Fay, a former lover, arrived out of the blue to ask for his help. Her current lover, a rich real-estate tycoon Mickey Wolfmann, had a wife possibly plotting to commit him to a mental hospital. Within the first five to ten minutes of the film, Doc utters the words “Don’t worry. Thinking comes later.” He’s exactly right. Just like Doc himself, the film seems constantly stoned out of it’s skull. I don’t think I’ve ever seen a character in film have such a distaste for plot and exposition.

There’s even a scene where Doc is reading a sheet of paper with crucial expositional information. Shaking his head in frustration, he chucks the paper away. And that’s basically the way Inherent Vice does business. It just floats around, leaving you to follow on its coat tails. To write in Sportello’s vernacular; ya either dig it, or ya don’t. I certainly dug it on the first watch, but like all great cult movies, Inherent Vice demands a second watch. After Doc and Shasta’s meeting, she isn’t seen again for hours and the plot isn’t either. Anderson does inquire about Wolfmann’s whereabouts and looks into Shasta’s disappearance. He subsequently decides to just follow him around looking for a saxophonist who faked his own death (Owen Wilson). This is also while having an affair with the Deputy District Attorney (Reece Witherspoon), and snorting cocaine with a dentist (Martin Short). This dentist runs a heroin syndicate called “The Golden Fang”.

Best of these adventures is Doc’s encounters with hippy hating SAG actor, Lieutenant Detective “Bigfoot” Bjornsen (Josh Brolin). Brolin is the standout performance in spite of being in a movie with Joaquin Phoenix. That should speak miles to his work here. Bigfoot hams it up 100% as he deep-throats frozen chocolate bananas, eats a platter full of weed, kicks down doors, and screams his orders for Japanese pancakes. Eventually, about an hour in, you learn to go with the flow. Any attempt to follow the plot or to make a little chart unraveling the story would be an exercise in futility.

Another standout is first time actress and renowned singer/songwriter Joanna Newsomm who plays Sortilege, a wandering hippy with a voice like honey. In a deviation from the novel, Anderson has Newsom narrate the film. I compare her unique pipes to Linda Manz’s odd yet soothing voice in Days of Heaven. While not the most important character, and having little screen time, Sortilege is nonetheless the perfect third person narrator.

Sortilege walks up and down Gordita Beach recounting stories of Doc and Shasta. In one particularly beautiful scene, Shasta and Doc run down Sunset Boulevard during a storm to try and “score some dope”. A Ouija Board advised them to do so. Although they don’t find anything, Shasta and Doc share an intimate kiss accompanied by Neil Young’s “Journey through the Past”. All of this is shot on gorgeously creamy 35mm film stock. Anderson and his DP Robert Elswit perfectly emulate the cinematography of the late sixties. Every face is three dimensional with a palette of oranges, yellows and impenetrable blacks. It’s a true testament to the beauty of celluloid.

Near the end of the film, a narrating Sortilege says “inherent vice in a maritime insurance policy is anything that you can’t avoid. Eggs break, chocolate melts, glass shatters.” Inherent Vice is ultimately a weed induced LA fairytale about lost love and hippies. It’s about the tendency of people, places and things to deteriorate due to our fundamental instability from within. I’m eager to see its reputation in the future.