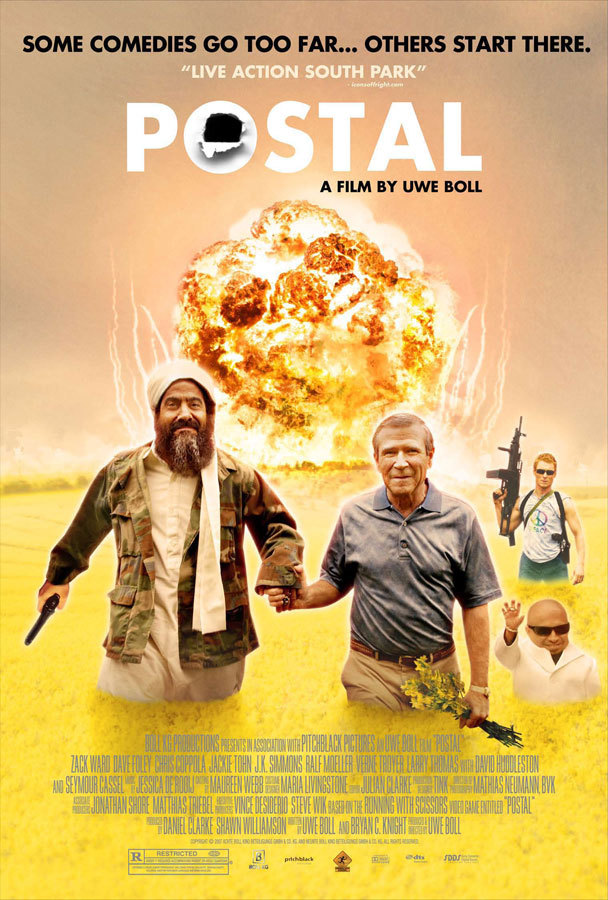 Yes, I’m doing it. At the insistence of my good ex-friend (A Trumper, so fuck him) Ted Barrus, I am reviewing an Uwe Boll movie. Uwe Boll is a legend for making tasteless movies that are virtually unwatchable. The movie Postal is his finest achievement. The only other movie that I’ve watched that comes close to Postal for sheer vulgarity, is Cooper’s Christmas, which I loved.

With what is going on in this country and the world, I cannot think of a more appropriate movie to take your mind off of the chaos around us. Just about every politically incorrect and vilely tasteless box in the book is checked in this film. We have, and in no particular order:

In other words, the movie Postal is a perfect representation of The United States in 2020.

I won’t even attempt to explain or justify the plot in this movie. It is almost as ludicrous and horrifying as what we are witnessing in the cities and towns of our country today. Just take all of the bulleted points I listed above, add in a lot of profanity and inanity, and you have this Uwe Boll classic.

What I enjoyed most was the slapstick bungling of the Arab terrorists and the hapless Osama Bin Laden, played by Larry Thomas. His interaction with the stunningly realistic George W. Bush (Brent Mendenhall) was the highlight of the movie. Not to spoil anything, but Osama and George were secret gay lovers, Brokeback Mountain style. Their phone conversations and dance into the sunset were genuinely inspired.

This is the first Uwe Boll movie that I have ever watched, and it was flat-out hilarious. Definitely NSFW, children, babies, pets, Karens or the even remotely politically correct. However, if you want a break from the IRL chaos around us, and can deal with something like a cat’s butt being used as a gun silencer, this movie is for you.

8.0/10.0 With the Goatesian rating of Bring Plenty of Popcorn and Enjoy.