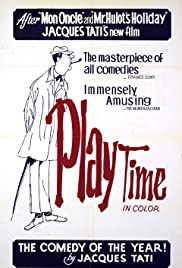 Modern Life (and the modern cubicle farm) interfere at every point with Monsieur Hulot’s attempt to hold a meeting with an important business executive.

2 hrs, 36 minutes, suitable for all ages

Fair value of Antrum: $25.00. I really can’t think of another film like it. In some ways, it evokes Chaplin’s Modern Times, but it has a subtlety and surrealism all of it’s own. This is an evergreen film. Any film lover should consider Playtime for their collection as an excellent fall-back film, a comedy to break any tie or indecision of what to watch.

A Day in the Life of a Touring Bus: Playtime begins and ends with a gaggle of American housewives gossiping about the romance of Paris; a romance that they never get to see, as their tour takes them from silver-gray airport to silver-gray exhibition hall to silver-gray hotel. And that’s the genius of this unique comedy: it’s not a satire of a society but of an aesthetic. The central target of Tati’s eye is the modern aesthetics of the jet age.

Empty brutalist hallways that echo with the approaching footmen. Glass doors so transparent that nobody even notices when they’re destroyed. Black leatherette chairs that squeak and squeal as they are sat upon, as, after all, they were never meant to be sat upon.

And that is the comedy of Playtime, depicting a world where a design philosophy is trampling over human sense and empathy. Tati seems to have predicted Apple and Ikea alike; and his film recognizes the hollowness of late stage capitalism decades before it metastasized.

Who is this film perfect for? People who like sight gags and slapstick; who wish Charlie Chaplin was French. Playtime is one of the most universal comedies ever made. You could show this film to any age, any culture, and they’d find it weird and silly.

Who will not like this film? Playtime is in no way a plot or dialogue driven film. And I think that persons not familiar with the rituals of French cuisine will not pick up on the ‘horrors’ of the restaurant scene (the opening of a chic new restaurant that basically does the opposite of haute cuisine).

What is the summary of this film’s concept? Monsieur Hulot attempts to have an important meeting with a business executive, but gets continuously stymied by tourists, addled doormen, salesmen, and other interlopers, over the course of a day.

How does this film compare to others like it? It’s a timeless film, and also a throwback to the comedies of the silent age.

It’s also one of the most perfectly composed films ever made. Shooting Playtime took three years, and 100 works to build the sets. Tati essentially constructed his own city, his own perverse utopia, for this film. It’s breath-taking. Imagine a live action film of The Jetsons, or a comedy that demolishes Epcot Centre.

What works in this film? Playtime is an amazing comedy in part because the human is not at the center of the comedy. It’s a comedy of milling crowds, of nearly continuous motion and comedy, and yet, we barely get to know even the beleaguered Monsieur Hulot. It’s an absurdist ballet of gridlock traffic and vacuum cleaners, couriers and consumer goods.

Besides Mr. Bean, Playtime is an obvious influence on the Coen’s Hudsucker Proxy; I was also reminded of Russian Ark. This film is a cinematographer’s dream.

Is this film worth re-watching? Oh yes. I’ve watched it twice in a week and it certainly is going to be a film I suggest when looking to surprise family and friends.