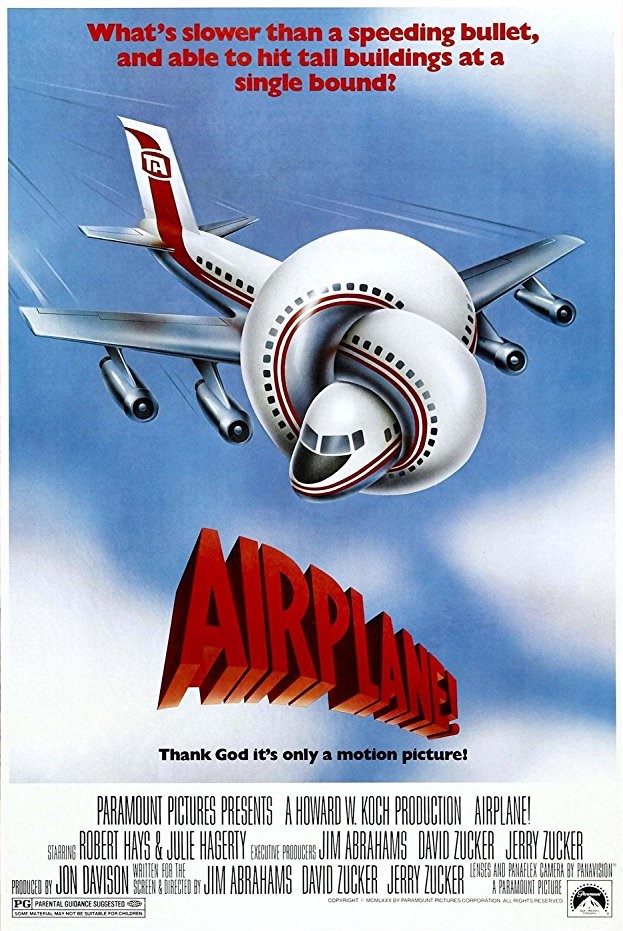 Airplane! is surely (don’t call me that!) one of the greatest works of movie comedy ever made. From the beginning announcement of the “Red Zone and White Zone” overhead proclamations to the ending disembarkation off of the traumatized plane, every scene and every line is hilarious. “Give me Ham on 5 and hold the Mayo” is just one outrageous pun of many that glorify this wonderful movie. Sure, the gags are predictably corny and sometimes hackneyed, but what a face-busting movie this is.

Airplane! is the ultimate spoof movie, bringing to an end a decade of disaster movies that we were plagued with in the 1970’s. The parodies, puns and one-liners elevate Airplane to the top tier of silly, laugh-out-loud movies with memorable quotes and gags that never grow old.

O.K., enough of the accolades, platitudes and praise, what about the plot? The plot? What plot? Who cares? An airplane is traveling to Chicago with its crew and passengers who include Ted Striker (Robert Hays) who left his cab (running) and fare at the airport. Ted is desperately trying to repair his relationship with one of the flight attendants Elaine (Julie Hagerty). Ted crashed in his misson to Rio Gumbo (or somewhere) and now is fly-shy and has a drinking problem. The pilots are sick and unconscious and someone must land the plane! Buck-up, don’t fuck-up, Ted!

There is not really much more I can say and avoid the perils of redundancy in this review. If you have never seen this film, invest 88 minutes of your life and fire it up on Netflix. If you are depressed, or having a bad day, Airplane! is your cure and is guaranteed to put a smile on your face. It is naughty, without being vulgar. Yes, some of the jokes and gags are dated, but they never, ever get old. This great film is infinitely quotable and infinitely watchable, and yes, there is even a horse sleeping in a bed.


10.0/10.0 With the Goatesians Special Award for comedy excellence.