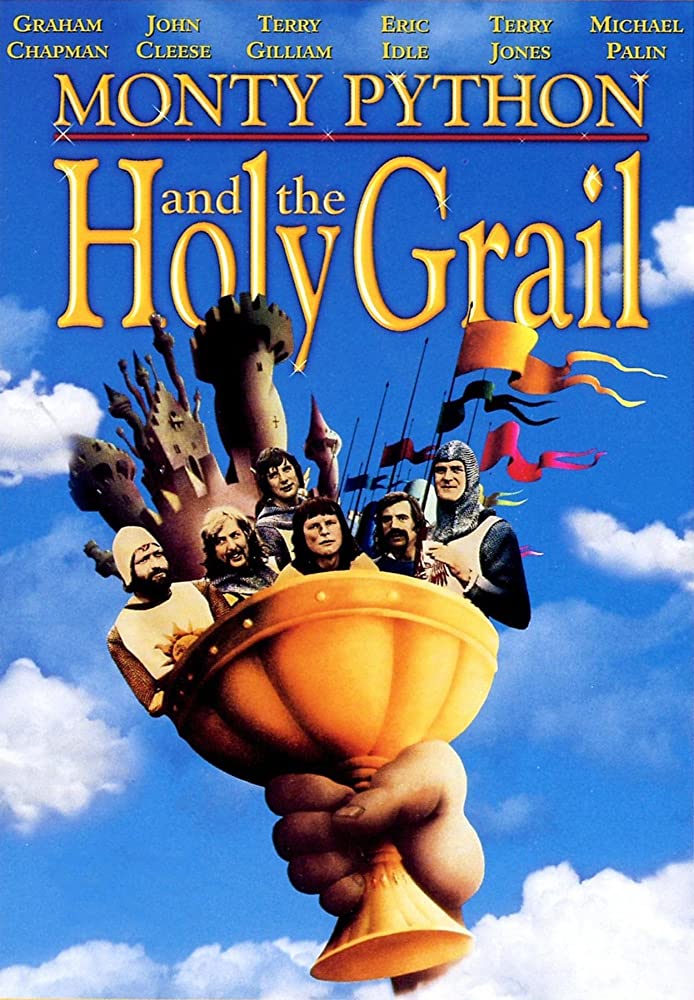 O.K., what in the heck is going on here? Since the prospect of seeing a new movie at the theater now seems hopeless, I’m on a mission to seek the Holy Grail of all movies. Besides, I’d rather re-watch a favorite movie a dozen times, than watch a new stink-bomb like 365 Days. Now, Airplane! was magnificent, and it is blasphemous to even think of something better, but we have the best comedy ever made at our disposal on Netflix.

Speaking of Holy Grails, this is it, this is the one, the funniest comedy ever made. This great film is a low-budget masterpiece, a comedy that is outrageously original and hopelessly hilarious. Move over Peter Sellers in Dr. Strangelove as these six Python actors played no less than 36 parts. Every single line uttered is devastating archery, from the unladen swallows to the final assault on the elusive castle.

Right. The plot. Well, Christmas Must BE SAVED! No, that is another one of my obsessions. The plot is that all the good Sir Knights must find The Holy Grail. The Grail, of course, is the mythical goblet that the mythical Jesus drank Zima from at The mythical Last Supper. Now, why this goblet is of such importance to Evangelicals, Catholics and other Religiously Impaired Fools, I don’t know…..But I [GET ON WITH IT!]

O.K., after Good Knight Robin and Good Knight Sir Gallahad went on separate ways on the quest, King Authur and Sir Bidivere uncover a lead from The Bridge-keeper as to how to find The Grail. Robin has soiled his armor with his encounter with the 3-headed knights, and Sir Galahad is barely and reluctantly rescued by Sir Lancelot from losing his virginity at Castle Anthrax. This is right before King Arthur stumbles upon the Knights who say “Ni!” and their need for the services of Roger The Shubber”.

That is about all I can say. What happens from this point on is so dazzlingly awesome that I cannot even begin to articulate. The quest moves forward to Sir Lancelot’s assault on the wedding party and beyond to Tim The Enchanter and The Bridge of Death. The culminations of the search with the real life parallel consequences are like nothing ever before presented on the screen.

The jokes are endless, rapier-sharp, and never to be forgotten. The dialogue is so crisp and grin-inducing that you need to “Go get a glass of water”, because it leaves you breathless. Every line is unique, memorable and quotable. There will never, ever be another movie like this one, and thank Goat for this masterpiece.

10.0+/10.0 For the Greatest Comedy ever made, and The Goatesians Medal of Honor For Excellence.

Quotes, One-Liners and never to be forgotten lines: