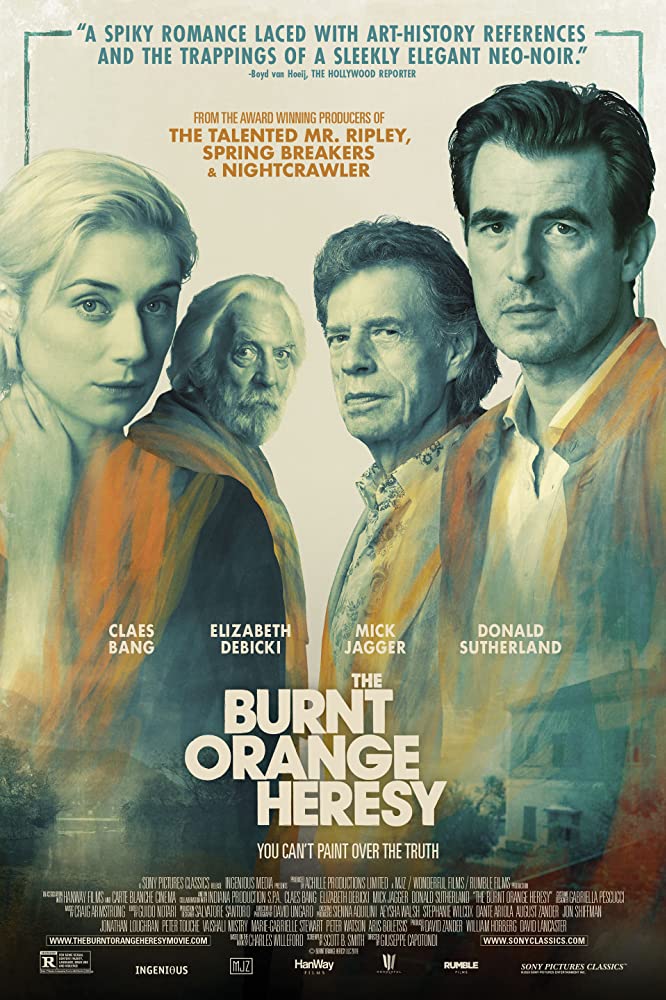 Can’t quite put my finger on it.

I am sure you have heard this quote: “Those who can, do. Those who can’t, teach.” – George Bernard Shaw, Man and Superman. Up until five minutes ago, I knew nothing about Shaw, nor that he was the scribe behind that idiom. Now I know Shaw wrote that quote, as well as that he promoted eugenics, was an anti-vaxxer, and expressed admiration for Mussolini and Stalin. In related news, I have just learned that George Bernard Shaw was an asshole. Since then, that idiom has been modified in all kinds of ways, one of which is “…Those who can’t, criticize.” The irony of me, a film critic, discussing that quote while slamming an Academy Award winner (Shaw won for Best Screenplay in 1938) does not escape me, but I bring it up because it is a major theme in The Burnt Orange Heresy. Fun fact: Shaw was also an art, book, music, and theatre critic from the mid-1880’s to the turn of the century, sooooooo…yeah.

(SPOILER ALERT – Not that Shaw was a dick, but coming up about the film.)

James Figueras (Claes Bang) is an art critic who has recently published a book about the ability of critics to manipulate people’s opinions. We first meet James as he gives a lecture about a particular painting. He asks his audience their initial impression of the painting, then tells them it is just an ordinary painting unmoving to the common eye. Then, he soliloquizes about the artist and the significance of this brushstroke and that color, examining the deep meaning behind the elements, and convincing his captive audience that they want to purchase a print. But, he is not done. He concludes the lecture by revealing that the entire story was made up and that he himself painted the piece the night before. Voila, book sales. For real casino gaming play and win real money at CasinoChan Canada.

Listening in on the lecture is Berenice (Elizabeth Debicki), a random person with pithy wit, who challenges James that she still wants to buy a print of his art, even after knowing its true origins. We later get a backstory for Berenice, but at this moment, she is the mysterious beauty challenging a handsome scoundrel. Naturally, they fuck later that night, following which the real story begins.

We learn that James has been summoned to meet wealthy art collector Joseph Cassidy (Mick Jagger), for what he assumes is some sort of art critic job. Upon arriving at Cassidy’s lakeside estate, Cassidy explains that his neighbor and charge is famed, reclusive artist Jerome Debney (Donald Sutherland) and that Cassidy would like James to interview Debney. James is flabbergasted at such an opportunity, one that would result in James’ own status skyrocketing in the art world. The catch is that Cassidy wants James to “procure” one of Debney’s paintings, by any means necessary.  Failure is not an option, lest Cassidy make information public that would ruin James’ life.  Ahem, blackmail. Having already established that James’ scruples are less than virtuous, he accepts.

Not knowing what he was getting into, James invited Berenice to accompany him, for exactly the reason you think. She hears Cassidy’s initial proposition, but is dismissed prior to the whole art theft and blackmail part. For most of the film, my wife and I expected there to be far more intrigue surrounding Berenice. The initial lecture scene sets her up as someone significant to be revealed later. A plant by Cassidy, Debney’s estranged daughter, a spurned artist, something to make you go “Oooohhhhhh” at some point in the third act. Days after watching this film, my wife and I are still debating her significance to the story. Trying to fit her into any role but friendly companion to Debney and antithesis to James runs into multiple contradictions and implausibilities. Her introduction as mysterious and bold is jettisoned shortly after that first night with James, the film relegating her to kindly woman and eventual dupe by the end. Ahh, misogyny. It is the main disappointment of an otherwise decent movie.

Until the climactic yet unsatisfying denouement, the film keeps the viewer engaged throughout. It is very possible that my wife and I missed something about Berenice. We came up with multiple interpretations that probably give the film far more credit than it deserves. Deconstructing the undercurrent that women should be seen and not heard would honestly take a semester’s thesis in a film theory class.  But we definitely didn’t miss anything about James or Cassidy. Like Berenice is, we are initially drawn to James for reasons best described as naughty. He is the bad boy who seemingly has the world figured out, with connections to a world we are on the outside of. Similarly, Cassidy is both charming and slimy, always one step ahead. Both characters are the kinds you aren’t sure whether to root for or against until the climax happens and you are most definitely sure. Also, Mick Jagger is a surprisingly good actor. At no point during Jagger’s scenes was I thinking he should stick to music.

I am still struggling with how I felt about this film, but I am glad I watched it. Sure, the dialogue was very poetic, dripping with analogies and pretention. And Debicki’s role in the film might have been just an excuse to get her and Bang naked on screen rather than Berenice being relevant to the plot. But, it made me think a lot and reminded me how much I like Donald Sutherland. If anything, it gave me plenty to be critical of, including an asshole like Shaw.

Rating: Ask for three dollars back while you try to put your finger on how you felt about the film.