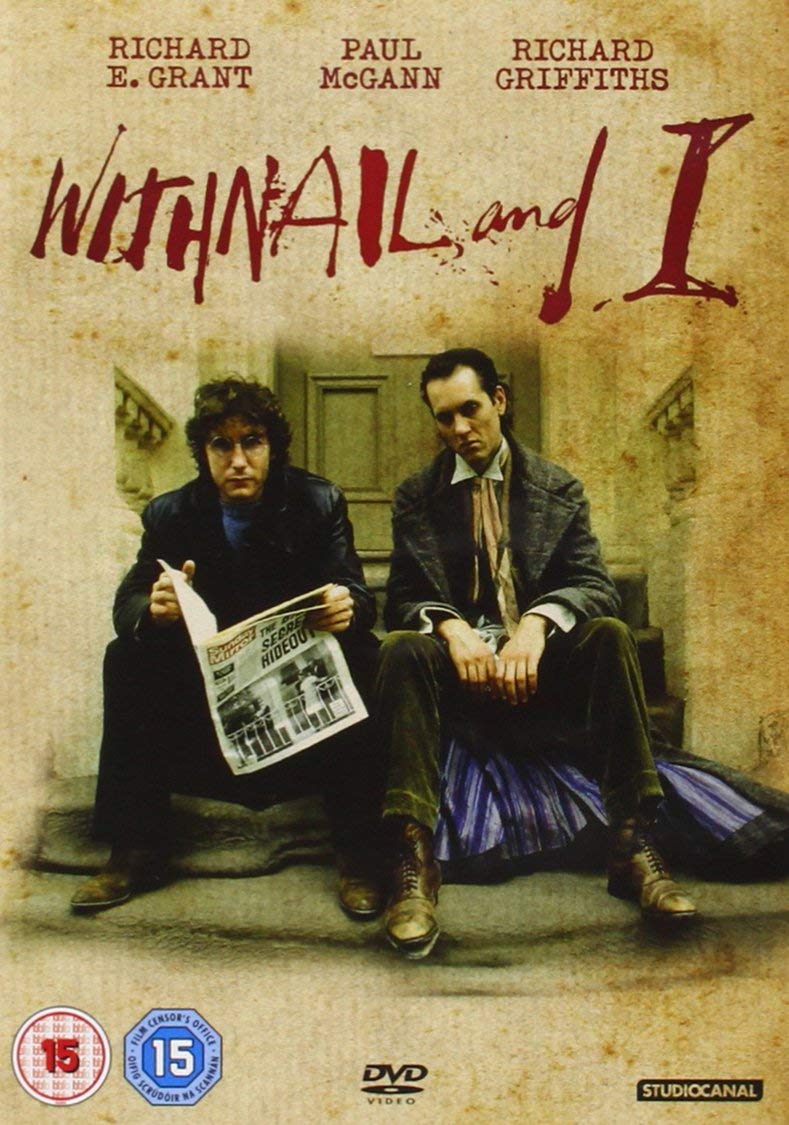 It is indeed an honor to review one of my favorites and one of the funniest and wittiest comedies ever made. Withnail & I is in my personal Top 5 movies of all time for re-watchablity and scathing dialogue. Armed with this splendid script, Richard E. Grant executes a tour de force as a relentlessly angry-at-the-world unemployed actor and raging alcoholic. He and his sidekick in misery, “I” (Marwood), played by Paul McGann, form a blistering tandem that scour the countryside, just looking for some peace of mind.

Withnail & I is set in London in the 60’s and our two out of work actors are desperate for a change of scenery. Out of money, and more importantly, out of booze, Withnail and Marwood talk Withnail’s rich uncle Monty into letting them have the keys to his countryside cottage, and the adventure begins.

As you might imagine, these two thespians set off to the country totally unprepared, bringing no provisions except for booze, that Withnail promptly demolished on their trip out. Arriving in a blinding rainstorm and driving a Jaguar with one headlight and one windshield wiper, their woes began almost immediately.

Desperate for wood, food and other common necessaries, this hapless duo appeals to the local townspeople for help, but encounter downright hostility from some very strange characters, including Jake the Poacher. Things look hopelessly bleak until Monty shows up unexpectedly in the middle of the night, scaring the Hell out of them as they were expecting an unfriendly visit from Jake the Poacher.

Monty, of course, being highly organized and efficient, brings food, booze and other supplies and is looking forward to a nice weekend with his “boys”. Monty is also a raving homosexual and has designs on Marwood, with encouragement from the scheming Withnail. After yet another run-in with townspeople, this time at a stuffy tea house, Monte and the boys retire to the country house for food, drink and lots of inane prattle, all hilarious.

I don’t want to spoil anything, but the rest of the movie involves Monty’s not so subtle attempts to seduce Marwood, and Marwood’s attempts to politely avoid these advances. Withnail, ever the drunk, does not help matters at all, and the blowup between the two friends is absolutely comical.

The acting and word-smithing in Withnail & I is just stunning. The British dry humor has seldom been better and this is only Richard E. Grant’s second film, but clearly his masterpiece. What is so amazing is that Grant portrayed a drunk, and Grant is a tee-totaleer. He never, ever broke character. This is a film that requires multiple viewings to appreciate, but it is well worth it. The film is a comedy, but has a sort of tragic sadness to it. Ultimately, the movie is an eulogy to what was said to be the greatest decade ever, the 60’s.

Withnail & I is much more than just a mere comedy with snappy lines. Sure, it’s a film with a huge cult following and is infinitely quotable. It is also a film about coming of age and friendship. It is a bizarre and lopsided friendship, that readily exposes Withnail as one who throws Marwood under the bus…several times…At the pub, to the randy bull, to Jake the Poacher, and to his Uncle Monty. To understand this relationship is to understand and appreciate the very essence of this masterpiece. Withnail and Marwood, and Withnail and I, and love to a fault.

10.0/10.0 With The Goatesians Rating Of One Of The Best Movies Ever Made