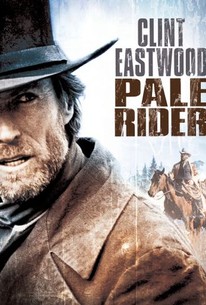 Fair value of Pale Rider: $2.00. This is a middling Clint Eastwood western, surprisingly old-fashioned, which is really only for the Eastwood completists.

And Death Was His Name: After a posse of hired thugs devastate a ramshackle prospecting camp, a young girl prays for justice. Soon enough, Preacher (Clint Eastwood) appears, silently and inexorably fighting back the machinations of industrial miner Coy LaHood (Richard Dysart).

Who Will Like This Film? Anybody that likes Westerns, and can’t get enough of the Man With No Name.

Who Won’t Like This Film? Pale Rider is a throwback to 1950s Westerns, with one dimensional villains, a classic ‘mining baron vs. villagers’ plot, and no real character development to the nameless protagonist.

Old Testament: There are glimmers of a better film within this film. Production values are top notch, and there is a solid supporting cast (Doug McGrath, Chris Penn, Michael Moriarty). But the whole thing falls flat, because they’re not given much to do other than observe as Preacher steadily wears away at the LaHood empire.

At no point does it ever feel like Eastwood is facing actual danger or adversity- and the star carries the film with a weary resignation. It’s a textbook case of going through the motions. With previous iterations of ‘The Man With No Name’, Eastwood at least conveyed a playfulness, or greed, or some suggestion of an interior life with the character. No such luck here.

What hasn’t aged well: It’s super skeevy to have both the teen-aged girl and her mother both hitting on and pursuing a man in his mid-50s, especially when it’s as monosyllabic and misanthropic as Eastwood’s character.

Also, the film doesn’t really give anything for the villains to do, other than get knocked down. Chris Penn and Robert Kiel turn in good performances, but they’re really just playing speed-bumps.

Had this film been willing to be more supernatural and religiously controversial, there might have been something. The film toys with the idea that Preacher is some kind of angel or revenant… had it gone further with this idea, maybe being a bit more like the Christopher Walken in The Prophecy, there might have been something to be said for the film. As it is, this film is almost like Blazing Saddles, minus the jokes, if you replaced Gene Wilder with a wooden Indian.

Is This Film Worth Re-watching? I’d describe this film as late night filler in a Western marathon. It’s got enough going on to make it watchable, but it’s also inessential, an anachronism in it’s own time that’s only more anachronistic nowadays.