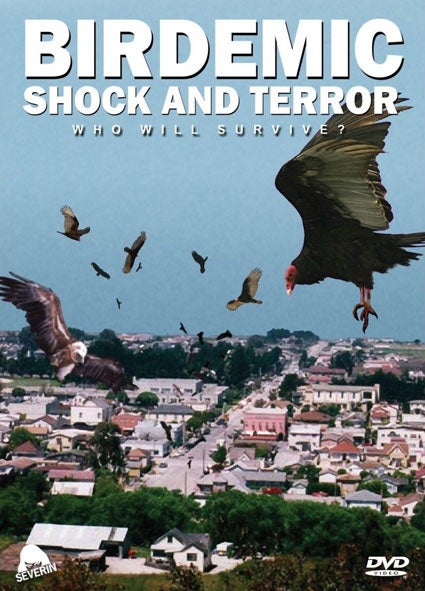 An inept attempt at cashing in on Hitchcock’s masterpiece.

Birdemic: Shock and Terror was clearly made without the benefit of anyone who knew absolutely anything about filmmaking within a hundred yards of the set. Witness production values and acting that make Tommy Wiseau’s notorious 2003 classic The Room look like a legitimate masterpiece. Witness sound editing and mixing apparently done by a pair of deaf children. Witness the worst special effects ever seen in a feature film. Witness the musical number “Just Hangin’ Out,” sung onscreen in its hilarious entirety by Damien Carter. Witness the flaming wreckage of a movie that is Birdemic: Shock and Terror.

A blatant, obvious rip-off of Alfred Hitchcock’s The Birds, Birdemic actually goes so far as to claim to feature a supporting turn by Tippi Hedren, who appears in clumsily integrated archival footage. Obtaining permission for this footage is undoubtedly where most of Birdemic‘s budget went, since the rest of the movie is filled with, to put it kindly, non-professional actors, as well as the aforementioned worst special effects of all time. Alan Bagh stars as Rod (presumably named after The Birds‘ other romantic lead, Rod Taylor), a software salesman, or something like that, who closes the biggest sale of his career at the beginning of our story (Million dollar sale!” he shouts, like a child playing Businessman), but realizes that he is still lonely and looking for love. We know he is a moral character when he chides his friend and co-worker Tony (Colton Osborne) for only thinking about sex.

Rod meets Nathalie (Whitney Moore), a fashion model, in a restaurant one day and the two begin to date on the strength of Rod’s staggeringly banal but sincere conversational skills. Seriously, dude practically picks this very attractive woman up by talking about the weather. Of course, the weather becomes a rather serious topic of conversation in Birdemic, which fancies itself a message movie along the lines of An Inconvenient Truth, which it awkwardly references by name at one point; on a double date with Nathalie, Tony, and Tony’s girlfriend, Becky (Catherine Batcha), Rod says, “That was a good movie, An Inconvenient Truth,” as though the others might have forgotten the title of the movie they just saw. Birdemic is just filled with believable dialogue like this.

A full two-thirds of the movie is devoted to the developing relationship between Rod and Nathalie, as well as Rod’s continued success as a… whatever salesman (I think it’s software or something), with absolutely hilarious boardroom meeting scenes. We never really see Nathalie do any modeling, outside of the beginning of an amazingly awkward sex scene between her and Rod, which makes the countless softcore scenes in The Room look positively erotic by comparison. With a few beers in me and the proper expectation level for a movie called Birdemic, I was thoroughly enjoying this first hour of the movie, frequently laughing out loud with great gusto. Then the birds appeared, and everything went downhill from there.

The birds, which are all eagles (apparently missing the intentions behind its inspiration, as Hitchcock willfully avoided birds of prey in his film, preferring to find horror in unexpected places), look like computer screen-savers superimposed over the live action, which is basically what they are. When they attack, our heroes manage to fend them off with coathangers, though the birds are later seen easily dispatching men with guns. Apparently they only kill when it’s convenient for the plot, such as it is.

Trying to critique this movie in any conventional way is not only futile, but absurd. You simply have to see it for yourself, and even then you won’t believe it. Several times throughout the first viewing (yes, of course I’ve seen it several more times since), I asked myself, “How is this a real movie?” The sound editing is particularly awful, showing not even a rudimentary understanding of proper technique. Dialogue in medium shots is frequently drowned out by background noise, which is then inexplicably gone when the scene cuts to close-ups. Each cut is usually accompanied by an abrupt silence that lasts until the next line of dialogue, which is invariably filled with the kind of background noise that would continue uninterrupted throughout the scene in a movie made by anyone who has the slightest clue how to make a movie.

But therein lies the charm of this terrible, terrible movie. It is its utter sincerity that makes it so funny. The original tagline for the film’s theatrical release was “Why did the eagles attacked?” As if this could possibly be a surprise in a film whose dialogue randomly references An Inconvenient Truth and hybrid cars, as well as including a lengthy scene in which Rod buys solar panels for his house, the answer to this question involves a half-baked environmental message.

According to a random tree-hugger (Stephen Gustavson) our heroes meet toward the end, the eagles are attacking people who are filling up their gas tanks, thereby contributing to the global warming that is threatening their natural habitat. The funniest part of this scene is that, immediately after imparting this information, the tree-hugger urges our heroes to run to their car and make their getaway while the birds are distracted. I guess the birds can tell the difference between hybrid cars and gas-guzzlers. They also apparently have the cognitive capacity to choose not to harm Rod and his environmentally friendly friends despite the fact that these very same clowns have been shooting the birds down throughout most of the previous scenes (after abandoning the less effective coathangers).

So, in addition to being basically a misguided remake of The Birds, this is also a sort of companion piece to M. Night Shyamalan’s similarly sincere and hilarious 2008 environmental thriller The Happening, albeit with even worse acting and a much, much lower budget. They would make a good double feature, but neither one will change the world, as their woefully inept auteurs seem to have in mind. Still, each is incredibly entertaining in its own unintentional ways.