Home / Featured Posts / All Is True 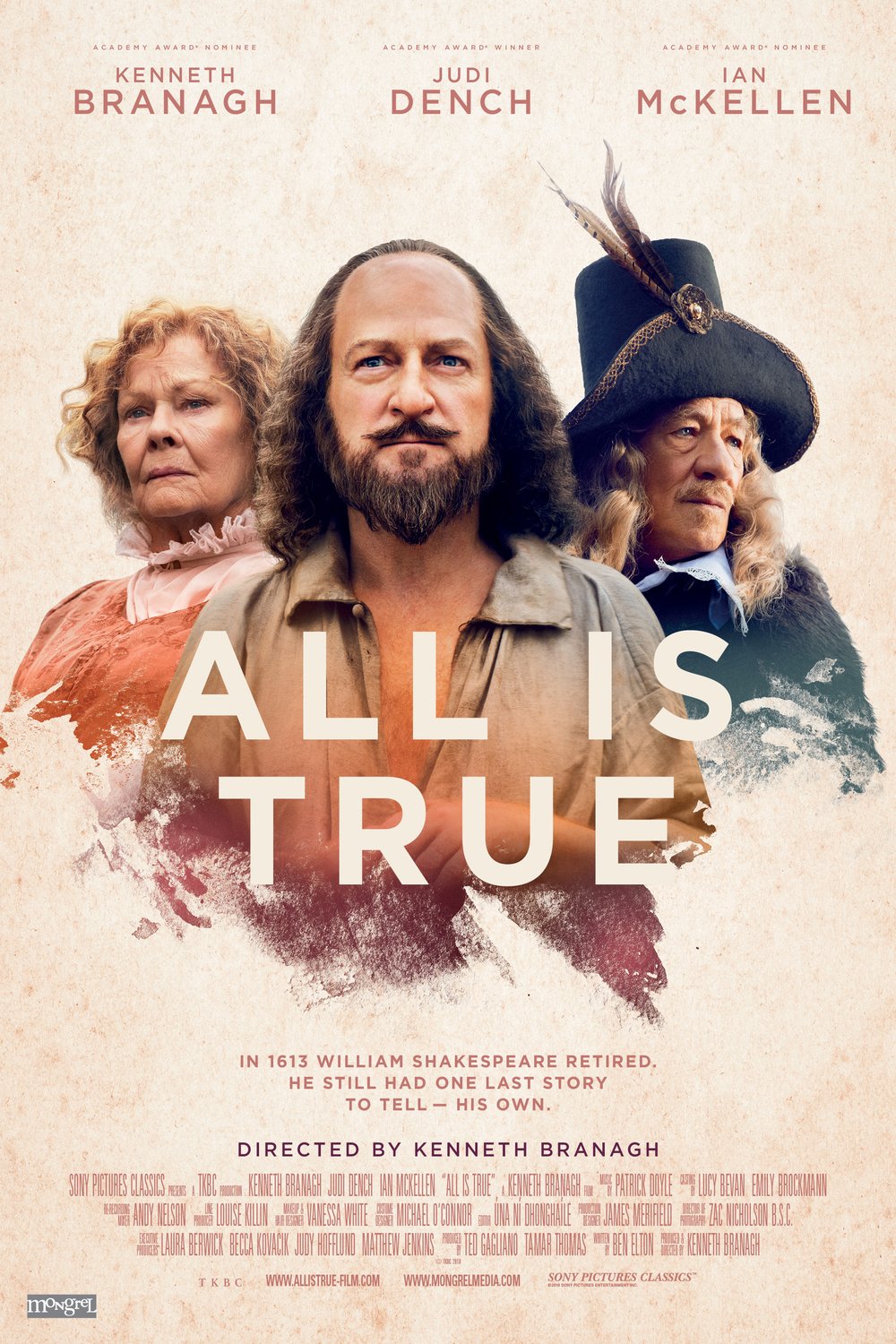 The final days of the magnificent Bard


In his autobiography LittleWilson and Big God, Anthony Burgess ( for those of you who did not know, his complete name was John Anthony Burgess Wilson. Furthermore, for those of you who do not know, he was author of A Clockwork Orange, Tremor in Intent, The End of the World News, among many other  novels, and a critical study of James Joyce, Re Joyce, among other nonfiction works) told the story of a woman who was given a volume of the complete works of William Shakespeare. After a time she returned the book, saying, “That’s just a book of quotes.” Indeed.

For most people educated (sic) in the American system of public schools, the Bard is little more than the source of largely anonymous quotes. “To be or not to be”, ‘All that glitters is not gold.” and ” ‘Cowards die many times before their deaths; the valiant never taste of death but once.’ “Nobody ever went broke underestimating the intelligence of the American people.” Ah, big foolin’, that was H.L. Mencken, another voice, along George Bernard Shaw, seldom heard from deep in the well of American ignorance.

So, despite Joyce’s warning, “Shakespeare is the happy hunting ground of all minds that have lost their balance.” I will forge ahead. An unbalanced mind is a sign of the times.

(A point of clarification: I am by no means a Shakespeare scholar, or a scholar of any stripe. I am an example of Virginia Woolf’s Common Reader. I read for pleasure.)

In a time when makers of movies of simple entertainment are adjudged genius, I will none-the-less apply it to William Shakespeare. The evidence is there for all to see, if they would only bother look. It has been there for four hundred years, so no one can say he has not had the time.

Burgess observed, “Wedged as we are between two eternities of idleness, there is no excuse for being idle now.” Yet the Bard stopped writing in 1613, right after his Globe Theatre burned to the ground on June 29th of that year, during a performance of Henry VIII (the alternate title was All Is True).

Elizabeth was dead for ten years and with her death the demise of the Tudor Dynasty. The King was James I, formerly James VI of Scotland, the Dynast of the House of Stuart, however short lived. The Tudor police state replaced with the Stuart/Puritan police state. The Puritans would close all theaters and burn all plays if allowed. Shakespeare went home to Stafford to his wife ( his senior by eight years ) and his two daughters, Susanna and Judith. His son Hamnet, Judith’s twin brother, died of plague at age 11. Perhaps. Although he was, like Marley, dead.

Susanna had married a Puritan physician who stood to inherit Shakespeare’s wealth through her after the Bard’s death due to the barbaric laws of the time. Had the Globe not already been destroyed, he would have closed it as soon as he came to own it, and kept the money it had made. Such is the role of religion in the theater. (Let us not forget our Puritan forefathers in the Bay Colony hung a couple of Quakers for the crime of being Quakers, a drastic form of dramatic criticism)

All Is True is directed and stars Kenneth Branagh and I can think of no one better suited to that role. His production of Henry V in 1989 was every bit the equal of Olivier’s inventive 1944 version. (the idea of a beginning in a performance on stage in the Globe theater and then to expand in the minds of the audience to the fields of France to the battlefield at Agincourt and back to the Globe for the final curtain (so to speak) was inspired.) Applause.

Branagh’s version was more gritty; realistic if you will, but still directed in true cinematic fashion, a style he continued in this marvelous four hour, full-text production of Hamlet a few years later. For reasons of time, Olivier was forced to cut Fortinbras, Rosencrantz and Guildenstern, but Branagh restored them.)

Branagh breathes life into the ideal playwright/poet, although one at the end of his life rather than the beginning as in Shakespeare in Love. This Shakespeare must deal with a neglected wife and two emotionally estranged daughters, one of whom, Judith, has aspirations far beyond what her society allows.

Shakespeare needs to deal with the reality of the death of Hamnet, and a garden in the boy’s name seems the best way. It becomes plagued with weeds. The tragedy of a son who believes he can not live up to the expectations he assumes his father has for him. “He was an ordinary little boy.”

Ian McKellen makes an appearance as the Bard’s patron and subject of sonnets, the Earl of Southampton, a man with the unpronounceable name of Henry Wriothesley. As you might expect, wife Anne is upset (“You might have thought of my reputation.”). He is a man who does not suffer fools, and knows genius when he sees it.

Branagh’s subject is of an intimate nature, the emotional life of not simply a man, but an ideal, and he keeps his camera close. Some exteriors are shot with the camera just below eye level. The night interiors shot by candlelight, without benefit of the cries of genius that were heard after Barry Lyndon (snore) managed the same.

While working in Hamnet’s garden, Will is approached by a young man who wishes to be a writer, and asks how he managed to know the hearts of kings and commoners. How does he know?

After telling the young man the best way to learn to write is to write, he says:

“Do you want to be a writer, and speak to others and for others? Speak first for yourself. Search within. Consider the contents of your own soul. Your humanity. And if you’re honest with yourself, then whatever you write, all is true.”

Later, he confesses to a malady common to some near the end of life:

“I’ve lived so long in imaginary worlds, I think I’ve lost sight of what is real, of what is true.”