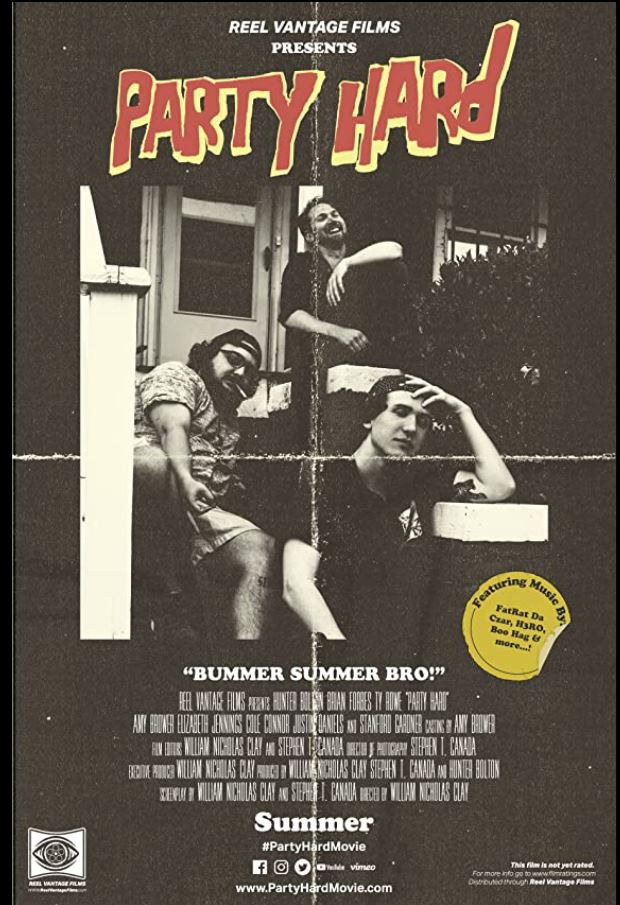 Chandler returns to his hometown to try to re-kindle a failed relationship. He opts for an all night binge party with his buddies instead

I am occasionally contacted by actors or directors of indie films to screen their latest movie project. I would be less than honest if I did not state that most are not worth my time because they are terrible efforts. Enough of that, because sometimes I stumble on a gem like Road To The Well.

Party Hard is a film that was shot in only two and one-half weeks and with a budget of $6,000, so keep this in perspective. With this sort of budget, and shot mainly at bars before the raging pandemic, I can only imagine how challenging it must have been to pull this off. There have been many good coming of age movies, but Party Hard explores the perilous bridge between young adulthood and maturity, and does this quite well.

Party Hard is the story of Chandler (Hunter Bolton), who moved from his hometown of Columbia, S.C. to Charleston. We don’t get a lot of backstory, but it seems that Chandler had been in a relationship that had not worked out, and he wanted a fresh start. It is immediately apparent that Chandler regrets the break-up and move, and travels back to Columbia to try for a reconciliation. Instead, he is side-tracked on an all-night binge of boozing with his two best friends, and reminiscing about what might have been.

Most of this film showcases the nightlife at Chandler’s hometown of Columbia, as the 3 amigos party long, late and hard. Much of the movie is almost like a documentary, with many Go-Pro movies within the movie to document the reunion of these 3 goofs. Chandler is however, noticeably distracted at times, withdrawing to his phone, obviously…texting the ex. He had tried to hook up and she said, “Not a good idea”. She is moving to continue her education at Clemson.

As the evening unfolds, more of the story is revealed, as the 3 best friends had aspirations of opening a restaurant, but Chandler’s abrupt departure killed these dreams, leading to an undercurrent of hard feelings. The night-long party culminated at the East Room, an all night bar. It was Chandler, Ty, Jules and now Lilly, an attractive girl that Chandler had hooked up with at a house party, squeezed in between bar hops.

The interaction between Lilly and Chandler was key to understanding what was going on with Chandler. Lilly was strong, attractive and intelligent, and could read Chandler like a children’s book. “What’s her name?” Lilly asked out of the blue, and Chandler visibly crumbled. In spite of them getting along fabulously, they did not even exchange contact information as Lilly faded into the night, and left Chandler and his 2 Bros to their own devices. For Chandler, it was realization, more alcohol, and an untimely drunken call to his ex at 4:00 A.M.

Party Hard was quite an accomplishment considering the budget and what had to be a gauntlet of filming around the bustle of open bars. There was a story to be told about Columbia and 3 of its residents, and the story was told well. Of course, the film was not without its flaws. It was too long, and tried to do too much, especially the side/ parallel story of Jules and his supposed girlfriend Halley, a diversion that added nothing to the film. The bar scenes and performances went on way too long and dragged down the otherwise good pacing of the film.

That being stated, for a 6K budget film, Party Hard was remarkable, especially the acting of Hunter Bolton. The late night act at the East Room, and the duet with Chandler and Lilly, was the best part of the movie. In spite of the length, this indie film held my attention and I found myself really caring about the characters. There was comedy, a little drama, revelry and a half-hearted spat. Two of the 3 comrades were still hurting over Chandler’s abrupt departure, over a girl, of course. There was no resolution, but in this case, none was needed. Guys work things out. Guys and gals? That’s a little more complicated.

Available for viewing at Prime Video

7.0/10.0 With the Goatesians rating of Interesting Indie Film.

The only quote that really matters: