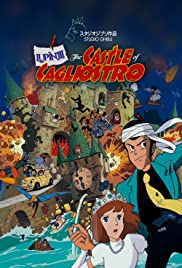 A dashing thief, his gang of desperadoes and an intrepid policeman struggle to free a princess from an evil count’s clutches

Fair Value of Castle Cagliostro: $14.00. This Miyazaki adaptation of a French novel is fun and picturesque, almost like a cinematic cousin of a Tintin adventure.

How Kid Friendly is this Film? It would probably get a PG in modern standards. There’s guns but not blood, a few deaths, but it’s on the overall tame side. Maybe not young kids, but 4th grade and up should be fine.

Dubbed or Subbed? The dub has better comedic timing, but the subtitles convey a lot more of the plot of Leblanc’s novel, which this film is adapted from.

Plot Summary:Master Thief Arsene Lupin is tracking a counterfeiting ring in a small Mediterranean country. He rescues a runaway bride and the caper thickens…

Miyazaki’s Debut:This is Hayao Miyazaki’s first feature length film. Prior to this, he had only made television episodes. Nonetheless, it’s a showcase for much of his style- elaborate Victorian interior design, the autogyros. In many ways, Miyazaki was creating the visual language for the steampunk/ dieselpunk aesthetic before the genre was even defined.

No Dull Moments: The pace of Castle Cagliostro is of nearly continuous action. Either characters are scrabbling along castle walls, scuttling through dungeons, or engaging in running gun fights. That being said, it’s still very much a cartoon, with characters regularly defying gravity and physics. It stands as a day and night contrast to the more recent live action Lupin series, which has strived from maximum grittiness instead of action.

Every cel a painting: The exacting draftmanship of the drawing is breath-taking, as it is in all of Miyazaki’s works. Castle Cagliostro is a throwback, a brilliantly executed realization of a pulp classic of the 1920s.

As a film, Cagliostro is best paired with Castle in the Sky and Porco Rosso; or along with Indiana Jones films. Had this plot been executed as live action with a suitable budget by a Hollywood studio in 1979, we would probably be talking about Arsene Lupin and not Indiana Jones.