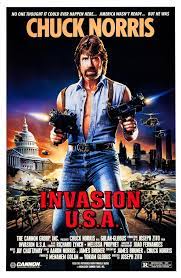 Matt Hunter is tired. Once a proud Company Man, and one of the few on the payroll with full beard and bare chest, he’s more a Lion in Winter circa 1985, with nothing left to prove and no arms left to break. Leaving behind a world on the brink, he’s retired to Florida … the Everglades, to be specific, and he spends his quiet hours chopping wood and mud wrestling alligators. It’s simplicity defined, and he’s beyond apology. He did his bit for king and country, and he’s not about to put on a shirt for a government that squandered his talents for decades. That is, until Mikhail Rostov ambled into town: and if by ambled, you mean hijacked a Navy cruiser, blew away a score of Cuban refugees off the Florida coast, plucked the hidden cocaine from beneath the blasted bodies, took said cocaine to some greasy dealer, blew off that same Cuban’s balls, and threw a coke-snorting whore out the window with Peyton Manning-style precision…pausing only to recruit a 500-man army of Russians, Central Americans, and Red Chinese to take over America at Christmastime. But I’m getting ahead of myself. Before he can bring the Great Satan to his knees, Rostov must kill Our Man Hunter.

Naturally, Rostov knows exactly where Hunter lives. Sure, the Everglades are 7,800 square miles of monotonous swampland, but after he’s rented (or stolen, if we know Rostov) some luxury airboats, secured a few armed thugs, and (I’m guessing) consulted a National Park map that conveniently included the coordinates of the Hunter shack, Rostov is ready to wipe his bitter rival from the globe. Only Hunter’s leathery friend (and fellow alligator wrestler) is there with a gun, and just in time to shoot a few invaders and warn Hunter of the fiendish plot. Hunter’s home is blown to smithereens, but he escapes out of the back window in a blast of glass and fire that leaves Hunter even better coiffed. Assuming Hunter dead, Rostov turns tail and runs to complete his takeover of the country. Hunter, slightly winded, takes stock of the pile of woodchips that was his Eden, and, as a last act of supreme devotion, tosses the body of his friend onto the conflagration. Make no mistake, he’s no longer retired.

So let’s assess this plot of Rostov’s. Best I can gather, it involves landing on a Miami beach with equipment left over from D-Day. Looks to be a gang of 300 or so, but we’ll be generous and stick to the original assumption of 500 men. These are ex-cons, failed revolutionaries, and fly-by-night drug dealers, one assumes, but they are, thank the stars, the most diverse lot of terrorists in the history of the craft. There are whites, blacks, browns, and, well, every other color of the rainbow, and for a moment, it brings a tear to the eye to know that at some point in our past, folks could put race and ethnicity aside and unite around murdering the entire state of Florida. It’s something we can all stand behind, even if we know Chuck Norris is not about to let the country fall to a maniac with bad skin.

At its heart, Rostov’s plan is to cause chaos and fear. He, along with his disciplined army, will shoot random Hispanics at cafes, blow up suburban homes, deliver bombs to shopping malls, and sow such dissention that Martial Law will be declared. With no one on the streets, and the populace running scared, this same army will, presumably, walk into the assorted state houses of the land and start running things like a military fiefdom.

It’s a brilliant plan, and we know this from the start, as one of Rostov’s henchmen guns down a copulating couple on the beach right before the landing crafts hit. If these terrorists hate sex this much, it’s bound to be a reasonable administration after the surrender flags fly.

And yes, it’s one hell of a start. According to news reports, over twenty acts of terrorism occur in a single Miami evening. Fires, bloodshed, and shattered lives. Think of this: TWENTY 9/11’s in one day, yet, YET, the shopping malls are packed the very next day. An attack on mindless consumerism? Perhaps, though it bears repeating that Golan/Globus, the feisty Israeli producing duo that damn near owned the 1980’s outright, never once dabbled in trendy Marxism. Fascism was their bag, and as such,
the more people spend on bullshit, the better they’ll be, so long as they surrender their civil liberties at the door. So many die so fast that it appears this rag-tag group will succeed where so many failed before. But then we remember Matt Hunter, and that Rostov failed to send him to the angels. And before the smoke clears, Hunter has his truck. And weapons. And a sidekick only 1985 could have produced: a shrill, shrieking female journalist who is all tits and freelance.

She goes by McGuire, though a name assumes humanity, and this chick is as
cardboard as they come. Armed only with a cheap camera … and seemingly everywhere at once, including a mass shooting and several bombings … this budding Woodward wanders about, complaining about the lack of cooperation from law enforcement. While kept at arm’s length for most of the film, she shows up to an armed siege with a press pass she no doubt clipped from the body of a real journalist. Why is she here? What purpose does she serve? Given that Norris himself wrote the script, one imagines she’ll be naked at some point, or gushing about Hunter’s massive member, but she stays defiantly clothed throughout. As such, I could only conclude that her astonishing silliness is a commentary on women. Not some women, but ALL women. Given Hunter’s, at best, 37 words of dialogue, it is clear that men are at their best when they’re silent and deadly. Women, on the other hand, chirp and squirt and do little but get in the way. They sure as shit don’t add bodies to the pile.

Before you know it, there’s talk of all 50 state governors getting together to suspend the Constitution. America is teetering, even though Rostov’s army has been cut in half. But as there are still explosions to be had, we won’t call it quite yet. There’s a superb car chase involving a woman hanging out the door by her hair, a tantalizing tease wherein a bomb is placed on a school bus full of wee ones singing “Row Row Row Your Boat”, and more Rostov rages, including a busted television and terror-filled dream involving Hunter. Suddenly, all depends on a finale at an Atlanta office building. Yes, my friends, these fiends managed to move beyond Florida’s borders, though one might wonder how a convoy of 32 armored vehicles drove from Miami to Atlanta undetected. Especially since, you know, the entire U.S. military is looking for exactly that: a 32-vehicle convoy bent on destruction.

Sadly, the finale is far from the apocalyptic slaughterhouse we expected, though there are plenty of flying bodies and fiery encounters to satisfy the cheap seats. Still, we wanted the world to end, or at least Florida to become so barren and lifeless that it was expelled from the union. Yes, Rostov and Hunter have their showdown, but it’s so quick and underwhelming that we forget it’s a direct rip-off of Death Wish 3. Even worse, the film ends immediately after Rostov’s charred limbs fly from the building. And I do mean immediately. No heroic return to Langley, no tickertape parade, not even a press conference to tell us who and what’s been lost. At minimum, what becomes of the surrendering terrorists. Do some escape and try it all over again, only this time with Hunter good and dead? It’s the opposite of a rush, and we’re left to wonder if the filmmakers simply ran out of money. Still, we do reflect. Until January 6 th of 2021, it would be the last real attempt to stage a coup. So close. Too close. But for a pickup and Chuck Norris, the last, best hope of earth reduced to a Florida-free republic