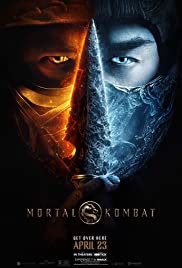 I’m struggling, friends. On one hand, I asked for big, dumb blockbusters to come back. On the other hand, not like this. You don’t need me to tell you that Mortal Kombat is a shit movie catering to the dumbest common denominator. That was a given; it’s right there in the title. Combat is spelled with a C. Spelling it with a K is a 60 point I.Q. reduction.

And for the record, my generation is the target audience. I was thirteen years old when the original game hit arcades and it was awesome for one reason – all the blood. Finish him! Rip his spine out! Look at the fountain of blood spew from his neck! Give me another quarter! That’s not a movie, that’s an adolescent who hasn’t found his dad’s Playboys yet.

Therein lies the fatal flaw in remaking this movie in 2021. The original movie was successful back in 1995 because we were still just sixteen years old, games still hadn’t embraced the blood and gore like Mortal Kombat, and skinny kids playing video games weren’t exactly fighting off all the ladies. Now, we’re in our early forties, blood and gore in video games stopped being impressive two decades ago, and we have families now, so you know we finally put down the joystick, if you know what I mean.

Don’t get me wrong, this movie has plenty of other flaws. Once you get past the discussion of “who is this even for?” you get to the discussion of how nearly every movie adapted from a video game has been hot garbage. And nowhere is that more true than for games that are nothing more than one-on-one fights. Yes, that original game had what can technically be referred to as a plot, but, no it really didn’t. The movie takes that plot and gives it all the fleshing it out it rightly deserves, which is to say none whatsoever.

There is a tournament that many of the humans don’t know exists, but they are a part of, and they have to fight against monsters from another realm in order to prevent a wizard from taking over Earth. Is that a bad thing? Don’t know. Why are certain people chosen? Random reasons. Are there other realms? Maybe in the next movie. Are any of the characters developed beyond their single magical power that is featured in the video game? LOL.

Once you get past the, ahem, plot, you notice that the movie is just a series of lurches between surprisingly dull fight scenes and really, really bad acting. The original movie at least crammed itself into a tournament format and didn’t take itself seriously. It knew it was based on a video game and leaned into that. This new version thinks it is a real boy. The opening scene features a family in rustic, 17th century Japan getting murdered by an evil ninja with ice powers (Sub-Zero), with just an infant surviving in hiding. Four hundred years later, we meet Cole Young, descendant of the family and MMA whipping boy. He is just trying to eke out a living and support his wife and daughter when Sub-Zero comes back to finish the job. Next thing we know, there are fighters everywhere, a training montage, words about prophecies and tournaments, and poorly filmed and choreographed fight scenes featuring absurd finishing moves that somehow manage to not know they are absurd. You had one job, movie.

Considering we just got Godzilla vs. Kong, the awfulness of Mortal Kombat stands out even more. Godzilla vs. Kong knows exactly what it is and delivers – giant lizard punches giant ape. It too has some really stupid story trying to rationalize why they are fighting, but the fights themselves are excellent to watch and make you forget the things said five minutes earlier. Mortal Kombat‘s fights are like watching a puppy die, but if the puppy’s head is cut off and bowels ripped out. And just to add insult to injury, the special effects during the fight scenes are terrible. Seriously movie, you had one job.

Like I said, I asked for this. Not specifically this – I still have standards. Just because new movies are being released in a slow trickle doesn’t mean I still won’t skewer sewage posing as film. The good news is Mortal Kombat is another HBO Max movie, so rather than waste two hours watching the film, you’re better off picking up your joystick. If you know what I mean.

Rating: Ask for all of your money back and kiss your family, especially if you made them sit through the movie with you.