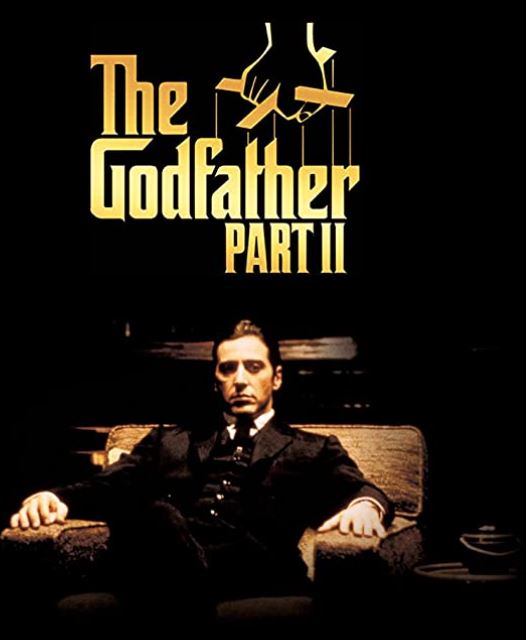 Arguably better than the first, making it the greatest movie ever made.ÃÂ

Fair Value of The Godfather Part II : $18.00. It’s overlong and the pacing can drag, but it’s an immaculately acted film with several stunning set pieces.

Focus on the Family: The first Godfather was a study in the parallels between Vito Corleone (Marlon Brando) and his son Michael (Al Pacino); a story of how familial bonds served to corrupt a man into a life of crime.

Godfather Part II instead shows the way in which crime and vengeance makes Vito and Michael opposites. We are given two stories: one of Vito’s rise to power, and the other of Michael’s reign as the head of the Corleone crime family. One is a story of an orphan finding and building a new family, becoming a patriarch; the other is a story of the pursuit of power leads a patriarch ultimately to isolation, alone in a dark lit room of a heavily guarded compound.

What’s the plot? Two stories which don’t interweave- how Vito goes from orphan to mob boss, and how Michael deals with enemies, both mobsters and government investigators.

Making More from Less: Coppola’s genius in this picture in part lays in how he surmounted what would be sequel killing stoppages: Marlon Brando and Richard Castellano (Clemenza in the first film) both refused to work on the sequel. Coppola was able to do brilliant replacement casting in bringing in Robert De Niro to be play the young Vito, and Michael Gazzo outshone Castellano as the replacement character of Frank Pentangeli, a Corleone capo who feels betrayed and turns on Michael.

Parallel Problems: Much of the troubles of this film comes from the dilution of the pacing that arises from the dual storylines, which don’t intersect with each other. This has the effect of siphoning tension and suspense. That being said, this film is full of great scenes, many of them highly ambitious: the Cuban revolution/New Year’s sequence, for instance, shot in the Dominican Republic is feverishly intense and chaotic.

Nicotine Stain Auteurs: When I say that this is a dark film, I don’t merely mean the violence, or the ultimate bleakness and nihilism of the central character. The 70s were a cigarette smoke saturated time, when tar left wan yellow on the linens and walls of America. Every shot seems to be trying to catch natural light; many of the shots have the characters conversing to each other in shadow. While it amplifies the mood, Godfather Part II can be a slog. Treating it as two movies can be advisable, and taking a break at the intermission is a good choice.

An Italian Tragedy: Godfather Part II is a downer in the way of Greek tragedies. It’s a film about Michael steadily severing every bond of trust and affection that he once had. It may not have a grand come-uppance for Michael’s domineering villainy, but it doesn’t have to- the shot of Michael, along in reminiscence, is enough to make the point.