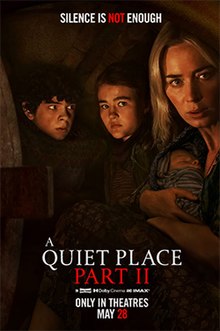 “A Quiet Place Part II” – Everything can hear you scream.

Since I did not write a full review of A Quiet Place, just noted it as arguably the best movie of 2018 in my year-end review, it is worth spending a little time here to talk about it before getting into Part II. A lot of horror movies are cheap, barely coherent films aimed solely to get a couple of jumps or screams out of the audience. If they do that, they win. That cheap part is key, just look at The Purge series. Each of the four movies (with a fifth coming out soon) cost between $3-$13 million to make and each pulled in around $100 million at the box office despite the movies featuring almost no actors you have ever heard of and writing that, at best, can be described as words on paper.

(SPOILERS for the first film. If you haven’t seen it yet, go now, and be quick about it.)

A Quiet Place differed in three key aspects. The first being it featured two well-known actors in Emily Blunt and John Krasinski. The second being it was a well-written screenplay with an exceptional attention to detail (one of the writers being Krasinski, who also directed). The third being it had a larger budget, though still inexpensive as movies go at $17-$21 million. All three of those things as a group were crucial to the success of the film. While a larger budget for a horror flick is a great thing (they were able to hire Industrial Light & Magic for the creatures, rather than hope a couple of kids with MacBooks could do it for a couple thousand dollars and some lollipops), the key was two exceptionally good actors and that meticulously written screenplay.

The acting was notable in that the entire cast was six people, two of whom are barely in the film. Essentially, it was Krasinski and Blunt with a couple of kids (both of whom were also quite good) and a script asking them to deliver a convincing performance with virtually no spoken lines. Since the creatures in the film can hear the smallest of noises, the family has to do everything as silently as possible. This is where the amazing screenplay comes into play. In order to convince the viewer of the danger posed to the family (and all surviving people) and how they were able to survive for so long, we have to see and not hear everything they do. From their sign language, to the trails of sand they walk on in bare feet, to the sound-proofed basement, to the lights used for signaling, to the sheer terror and desperation in the actors’ eyes, face, and bodies whenever so much as a mouse farts, everything in the sets, acting, and production design conveys a singular purpose – shhhhhhh.

The entire film is done so exquisitely that the audience unconsciously becomes part of the film, not daring to make a sound lest we become the next victim or betray the family’s position. When Lee (Krasinski) hears that toy space shuttle break the silence in the opening scene, the terror in his eyes is palpable and we clench in anticipation of what he is so afraid of. While most horror flicks hope for a couple of scenes of great tension, A Quiet Place succeeded in creating an entire film of great tension. It isn’t until the film is over that you realize your fingers are two knuckles deep into the armrests.

A Quiet Place is also the kind of movie that makes you dread a sequel. For one thing, you are worried that you cannot handle that level of tension for another two solid hours. For another thing, trying to recapture the magic of a movie like this is almost always a fool’s errand. This time, the audience knows what is out there. This time, the audience knows the family has a way to fight back against the monsters. And when it comes to monster movies, sequels almost always try to double-down on the monsters. Super-hearing in the first film? How about we give them the power of flight in the second film. Also, they are twice as big. Oh, and they can breathe under water. If not this movie, then they can when this becomes a trilogy.

This is where a great talent like John Krasinski comes in handy. For the sequel, he is the sole credited writer, directs again, and is even in a prologue scene depicting the first day the creatures attack. While this first scene is a fun nod to the audience who all wanted to know where the creatures came from, the rest of the movie is shown the same amount of care and meticulousness as the first film. And if you were worried about the sequel curse, Part II isn’t a traditional sequel that happens sometime in the future, often with different characters. Once that prologue scene is over, the film cuts to where we left Evelyn (Blunt) and her kids at the end of the first film. And I do mean the exact moment we left Evelyn, standing there with a shotgun.

With Lee gone, Evelyn and her three kids (including their newborn infant) set off to find a new place to survive. They soon come across an abandoned factory and have to run for their lives when Evelyn trips a tripwire and Marcus steps in a bear trap. Quickly, daughter Regan (Millicent Simmonds) sets up their one defense against the creatures (a speaker and her hearing aid, which make a screeching noise). Watching this occur from within the factory is Emmett (Cillian Murphy), a friend of the family, and fellow survivor who lost his family to the creatures. Seeing them kill one of the creatures, Emmett dashes out to help them and we are treated to another harrowing scene in which the humans use a combination of luck and environment to survive the attack. And like with the entire first movie, your hands are first-knuckle deep in your seat.

While recovering from the bear trap, Marcus comes across a radio station playing music on a radio in Emmett’s hideout. Regan concludes that the music is a message to survivors and decides that she is going to locate the source of the music, taking off on her own without Evelyn’s or Emmett’s knowledge. The rest of the film plays out this plot and continues on like the previous film and this film – very little spoken dialogue and an intensity that rarely dips below nine. Emmett goes after Regan and they must survive multiple encounters. Evelyn and Marcus must survive more encounters. A couple of new human characters are discovered and more encounters must be survived. And every bit of it as intense as the last film and none of it feels rote or less urgent.

Have I mentioned that this film was really good? It was really good. It is one of the few sequels that manages to be as good as its predecessor and shows that sequels don’t have to escalate from the first film to be good. It also helps that Part II got a massive boost in production funds ($61 million), kept its cast small, and featured two very good actors carrying the film. It is the perfect film to usher us back into theaters, especially since the audience unconsciously stays as quiet as possible. Because you never know what might hear you.

Rating: Do not ask for any money back and apologize for poking holes in the seats.