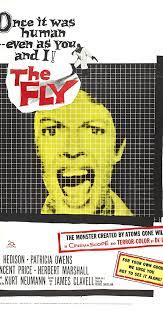 I have been asked before what horror movie was the scariest or the best of all time, and for this I would have to go with Alien for sheer competence, terror and technical excellence. However, if you are merely 9 years old, and quite the naive little impressionable twat, this movie terrified me like nothing before and nothing since.

It wasn’t the first, but it was the first that made me almost soil myself and walk home backwards. This movie: The Fly (1958). Horror Movies? I’ll never forget this one, not in a million years. Who could ever forget it? At the age of 9 or so, I was a horror movie veteran, or so I thought. I would attend the Saturday matinees of a local theater, armed with my THIRTY FIVE CENTS, which was good for an admission, a huge coke and a Butterfinger as long as my forearm.

The theater was, as usual, very dark and of the 3,000 seats, 2996 we unoccupied, the norm on a Saturday afternoon as most people were outside doing something fun. Not me, I was a glutton for punishment. The sunset times had been carefully memorized as to not be foolishly caught in the dark walking home from a horror flick.

In spite of the subtle warnings from a couple of neighborhood kids who had already seen The Fly, I remained confident, having survived several movies, including Them and The Invisible Man. Them was the movie about those giant ants that were trolling around in the sewer system. I just knew when that man was saving the kid that the huge ant was going to reach him before he could crawl to safety. I just knew it!

Anyway, back to The Fly The movie was scary enough, but nothing in my 9-year old brain prepared me for the absolutely numbing fright that assaulted my senses at the end of the movie. My 16 oz. cup, containing now only ice left my grasp and clattered noisily on the cold floor and the last vestige of the sticky Butterfinger froze in my open mouth as I was transfixed on the terrifying ending. I knew that I was in trouble.

I walked the 3/4 mile home, BACKWARDS and in the middle of the street as to not encounter any bush or shrub, ALL of which I was sure contained the nightmarish image that was forever burned into my brain. I refused to go to sleep that night and actually made my father sleep in the bed with me because I was that scared. Now I understood why none of the kids who had seen the movie boasted or talked about it, they were still too struck with terror.