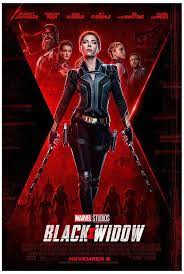 From birth, Natasha Romanova is groomed to be a KGB operative, the Black Widow.

Not even a pandemic can stop Marvel. Even with the delayed movie releases, Marvel seemed to be ready for any contingency. WandaVision, Falcon and the Winter Soldier, and Loki have filled in the movie/television schedule that has otherwise been a giant void of nothing. Now, with things opening back up and more than half of Americans with at least one vaccine shot (the rest of you need to get on it), all of those delayed movies are starting to hit theaters and/or our homes. That means Black Widow.

(SPOILERS Ahead – Don’t worry, you can keep reading. It’s not like you don’t already know Widow lives at the end.)

Black Widow takes place after the events of Captain America: Civil War and before Avengers: Infinity War. We pick up with Natasha, a.k.a. Black Widow (Scarlett Johansson), on the run from Secretary Ross (William Hurt), Widow having violated the Sokovia Accords. She and Captain America are the only two outlaw Avengers still free and Ross would like to change that. First though, we have to step back with the film for a glimpse of Natasha’s childhood. The opening scene of the film takes us to mid-1990s Ohio where Natasha lives with her mother Melina (Rachel Weisz), father Alexei (David Harbour), and sister Yelena (played later as an adult by Florence Pugh). Alexei returns home from work one night and says they have to leave. It is not clear what happened, but what becomes clear is that they were a Russian sleeper cell. At the end of the scene, Yelena and Natasha are returned to Dreykov (Ray Winstone), the head of the Red Room where all of the Black Widows are trained, including Natasha. Now, back to the almost-present.

Natasha is on the run and Yelena is a Black Widow on a mission for Dreykov. While trying to capture a scientist, Yelena is sprayed in the face with some red stuff and suddenly cares about the well-being of the scientist. This was confusing for a while because the spray doesn’t get explained any time soon and we don’t know much about the Black Widows aside from them being deadly assassins who take ballet and have all of their reproductive organs removed.

While on the run, Natasha receives a package from Yelena, so Natasha heads to Budapest (yes, that Budapest) and meets up with Yelena. And by meets, I mean fights with. Family, am I right? Yelena tells Natasha that Dreykov is still alive and the Red Room is still in operation and we finally get an explanation to the fabled Budapest that Natasha and Hawkeye always talked about, albeit a very abbreviated explanation. Natasha and Yelena decide to take down Dreykov once and for all and you know what that means. Vodka. Not for the Red Room, don’t be silly. Only a full nuclear family, one filled with trained assassins, can take down a room full of, er…trained assassins.

What I enjoyed most about the movie is the relationship between Yelena and Natasha. They definitely have some past demons, but they also have a respect for each other that mixes professional with familial. And if you have siblings, you will recognize the dynamics. Yelena is the younger of the two and is constantly poking at Natasha. One of the cleverest things about MCU movies is the way they show the audience that they are aware of themselves, but without coming off like morons the way the characters in F9: The Fast Saga do. One example is Yelena teasing Natasha about her superhero landings and poses, literally calling Natasha a poser. Later, Yelena will perform one pose herself, then remark to herself that it felt gross. It’s brilliant and is the reason why I’m perfectly fine submitting to the Marvel (Disney) overlords.

The film is not without its flaws. One flaw is that the story itself seems a little looser than most MCU movies. The film kind of flies past a couple of elements and kind of forgets to use some of the setup. The most glaring example is the use of Red Guardian, a.k.a. Alexei, or more specifically, lack of use. While Natasha and Yelena are reuniting in Budapest, we find Alexei in prison, bragging about being Captain America’s superior. Turns out, Alexei was given the super serum as well and we see him put it to use in the flashback scene by flipping a car and in prison during an…is this right? An arm-wrestling sequence? Huh. The rest of the film he is nothing more than comic relief. No more flipping cars and no more, uh, arm-wrestling, I guess. Just joke after joke after squeezing into his old uniform after joke. To be fair, the jokes were pretty funny. I just wish we got more of him in general.

At this point in time, we know what we are going to get from Marvel, including the intro music that, during these Covid times, is literally and figuratively music to our ears. Back are the quips, the action, the easter eggs, the fanboy winks, the post-credits scenes, and actors loving that they are in a Marvel movie now too. Harbour, Pugh, and Weisz were clearly enjoying themselves, as was I, since I really like Harbour and Weisz, and Pugh has definitely moved up my list after this film. I can’t say that it was an amazing movie because we are living in a post Avengers: Endgame world where every movie seems smaller now. But that’s okay. We need all of these movies and shows to be smaller so that whatever is the next big MCU thing feels big enough. Personally, I’m just happy that big movies are back, even if they are a step back in the universe we are watching.

Rating: Worth exactly what you paid for it. Home or theater.