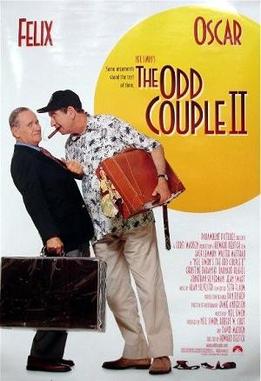 The Odd Couple is a classic comedy from another time, a different era, no, another planet. It was not violent or vulgar and men wore coats and ties, even to poker games. None of this is what really sets this movie apart from today’s fare. The difference is great acting, banter and dialogue that is just out of the ballpark excellent. Jack Lemmon and Walter Mathau have been paired together for many movies, but this one is their funniest by far.Â

Oscar Madison and Felix Ungar are close friends, but about as polar opposite as can be. Fate will soon throw them together with the commonality of being divorced by their wives. Oscar takes his separation from Blanch in stride, he is just annoyed, but Felix has just gotten the news that his wife is divorcing him, and he is devastated.

The tone of the movie is set up early. Felix decides to rent a cheap hotel room and jump, but cannot get the window open, pulls out his back, and ends up at Oscar’s weekly poker game, late and unable to contain his grief. Oscar has an 8 room Manhattan apartment, but it is a train wreck, the perfect reflection of Oscar’s slovenly personal habits. After a hilarious interaction of the poker crew with the despondent and suicidal Felix, Oscar invites Felix to move in with him. By now, everyone can see where this movie is going and we can hardly wait for the oil and water show to begin.

Much to the dismay of Oscar, Felix totally cleans and organizes the apartment. Their first blow up comes as Oscar is at a baseball game where he is doing his job as New York’s premier sports writer. He gets an “emergency” phone call from Felix. What is this emergency? “Oscar, don’t eat hot dogs at the ballpark as I’m making beans and franks for dinner”. By taking this frivolous call, Oscars misses a once in a lifetime triple-play, and he blows his stack at Felix.

Things go downhill in a hurry as the depth of Felix’s fastidiousness and OCD is revealed. He is a perfectionist, a neat-nick, and a hopeless hypochondriac, who is allergic to almost everything, especially dirt or disorganization. They are soon constantly at each others throats, an odd couple indeed, as Felix becomes the very caricature of a nagging wife, with Oscar just wanting to be the slob that he always was. The last straw is when Felix blows an opportunity for them with the two tittering English sisters with his whining and crying about his failed marriage.

There is not much of a plot beyond this, but none is needed as Walter Mathau and Jack Lemmon play off each other with devastating dialogue and blistering one-liners. It is a duet of mental anguish and manipulation, as Felix plays the disregarded and underappreciated spouse to the hilt. It is not hard to imagine why their respective marriages did not work out, as they both are impossible.

Oscar has had enough, tells Felix that he is throwing him out, and that is when the acting and dialogue is dialed up another notch as the two tear at each other with a love/hate of maximum hilarity. The scene on the apartment rooftop is brilliant and Matthau and Lemmon show just why they are one of the most legendary duos in acting history.

The Odd Couple is based on a Broadway Play written by Neil Simon. The 1965 play starred Art Carney as Felix. Since Matthau and Lemmon already had a successful history as a film duo, the wise choice was made to put them together again for this movie, a winning decision for sure.

9.0/10.0 With The Goatesians Rating of Comedy Classic