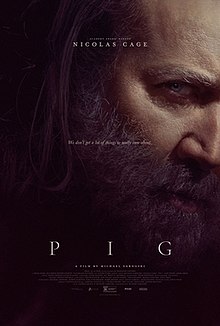 A beloved truffle pig is kidnapped in Oregon.

Pig is almost certainly not the movie you’re expecting it to be. I know it wasn’t the one I was expecting. On paper it sounds like yet another of the winking, high-concept Nicolas Cage Vehicles™ that have made up the majority of his 21st century output, the story of a reclusive former chef hunting down the men who kidnapped his beloved truffle pig. The premise brings to mind something too clever by half, like John Wick by way of Snakes on a Plane.

Pig is nothing like what I described above. In fact, it is an understated and downright contemplative meditation on grief, loss and the different defense mechanisms people develop to avoid dealing with their pain. Pig is probably the most incisive and honest depiction of grief I’ve ever seen on screen.

And it’s a goddamned masterpiece.

What makes Pig particularly effective is the way it plays on, and subverts, the kinds of expectations its premise might engender. In the opening scenes, Rob (Cage) is shown living an isolated but seemingly idyllic life in the woods outside of Portland, Oregon with his beloved pet pig. Together they make a living hunting for truffles and, barring brief weekly visits from flashy young truffle seller Amir (Alex Wolff), the pig is the only living soul with whom Rob interacts.

Though the movie hints at Rob’s failure to process the death of his wife Lori fifteen years prior, it initially seems like this is just a bit of bog-standard character development typical for movies about men who go on a rampage when pushed to their breaking point.

Much of the characterization initially reads this way. Rob is stoic nearly to the point of silence and, when he does speak, it is often to toss off a gruff one-liner at Amir. Amir is young, brash and obnoxious and seems, at first, to be an archetypal comic relief sidekick to Cage’s brooding badass. After Rob’s pig is seized in an abrupt and brutal late-night assault, he is livid. He is ready to move heaven and earth to get her back. The beast is about to be unleashed. Heads are about to roll.

As Rob and Amir follow the pig thieves’ trail into the depths of the Portland restaurant scene, it gradually becomes clearer and clearer that neither is the person they seemed to be. Rob turns out not to be a strong and silent man of action, but someone passionate and thoughtful who is haunted by the ghosts of his past. He is actually Robin Feld, a former chef and restaurateur treated with godlike reverence by Portland’s cooks who fell off the grid and closed off that part of himself after Lori’s passing.

Amir, meanwhile, puts on his peacock persona in an effort to distinguish himself from his rigid and cruel restaurant mogul father Darius (Adam Arkin). Darius himself wears his own sort of mask, flaunting his brutality as a kind of strength because letting his guard down might break his spirit entirely. Amir and Darius both struggle to accept the fact that Amir’s mother is hospitalized in a vegetative state, halfway between life and death. Although the search for Rob’s pig provides the narrative thrust, the real story Pig wants to tell is of the different ways Rob, Amir and Darius lie to themselves and those around them in order to conceal their pain.

I won’t spoil who kidnapped the pig or how it is resolved. In many ways, however, the pig is inconsequential. It’s a catalyst for action, it drives the plot and it underscores the themes. In all but the most literal sense, however, Pig isn’t about the pig. It’s far deeper than that, in surprising, provocative and powerful ways.

Pig‘s tonal balancing act of the earnest and the absurd would likely fall flat if it weren’t buoyed by great performances and the cast, Cage in particular, more than deliver. Given his recent output, Cage’s magnetic, understated performance was something of a surprise. Though often inclined to chew scenery, here Cage opts for subtlety, a choice that makes Pig far more effective than it would have been otherwise. He communicates volumes with a glance or a mumbled comment, and in the few moments Cage does emote more broadly, he does so in a way that is organic and completely earned. Pig reminded me of something that I’d forgotten for quite some time: when push comes to shove, Nicolas Cage is not only a gifted but truly brilliant actor. His work here may well be the best of his career.

Perhaps the most telling scene in Pig is one that, from a narrative standpoint, is practically inconsequential. Midway through the movie, Rob speaks to Finway (David Knell), the proprietor of a trendy, upscale restaurant who had briefly worked as a prep cook in Rob’s restaurant years before. Rob, whose memory is practically photographic when it comes to his work, recalls Finway’s unrealized dream of opening an English pub and chides him for chasing critical acclaim instead of following his passion.

Rob tells him that the restaurant, the customers, the critics, the food, they’re all fake. They don’t matter because Finway ultimately isn’t passionate about what he cooks. The only truth, as Rob presents it, is what a person genuinely connects with. This is the essence of the character and, in a way, the essence of Pig as a whole. Rob is an almost pathological seeker of what few things inspire feeling in his numb, traumatized heart. A loaf of salted bread, a visit to he and Lori’s old home, the eponymous truffle pig. Everything else is just frivolous.

As Rob says, “We don’t get a lot of things to really care about.” Pig sees the truth and the fiction that coexist in this sentiment. Rob is at least a bit dishonest here, as those few things he cares about (including the pig itself) are only placeholders that feel safer to him than the one thing he truly cares about but will not allow himself to accept: Lori’s passing fifteen years prior. At the same time, this may well be the most important theme of the movie. There are only so many people and things that a person truly gets the opportunity to care about. Maybe that’s why we work so hard to lie to ourselves when one of them is gone.

Cole is a writer that I stumbled across at Quora. I was so impressed that I gave him a parking spot and keys to the break room at Ruthless Towers.