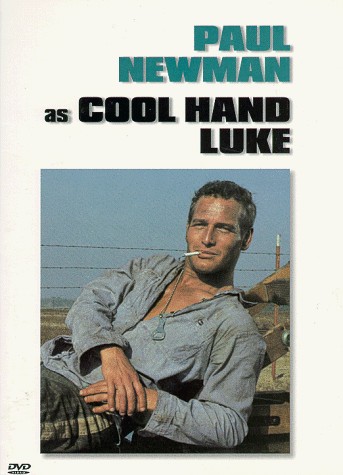 What we’ve got here, Is failure to communicate

Paul Newman has always been in the top tier of the greatest actors of all time. He is certainly in the company of actors like Peter O’Toole, Daniel-Day Lewis, Jack Nicholson, Richard Burton and Sidney Portier. His accomplishments as a beer drinker, race car driver, blue-eyed sex symbol and actor are legendary, and don’t need any puny accolades from me.

There is one of his movies among his stable of great performances that stands alone. This movie is Cool Hand Luke. Unlike another great performance in Cat On A Hot Tin Roof, we really don’t know what is eating Luke. He earns his prison time for foolishly and drunkenly cutting off the heads of parking meters in the Main St. of a small town. Being caught red-handed was inevitable, and the Captain (Strother Martin) asked him in disbelief, “What were you thinking?” “I guess I wasn’t thinking, Captain”, Luke replied with that smile.

Luke was good-looking, smart, charismatic and a born leader. It did not take long before he was crossing swords with the dim-witted big oaf Dragline (George Kennedy). In a sanctioned, sort-it-out boxing match that was held for inmates on Saturday, Luke was beaten almost senseless by Dragline, but he never quit. This reckless abandon shocked the hardened inmates and also was not lost on the Captain and the prison bosses who lorded over the inmates. They immediately knew that they would have their hands full with Luke.

After the fight, the poker game and the famous “I can eat 50 eggs” scene, Luke was firmly established as the de facto leader and hero of this gang of 50 prisoners. Even Dragline, and especially Dragline was totally mesmerized by the spell of Cool Hand Luke. Luke tries to flee from the constraints of his captivity several times, but things go horribly wrong. An anti-hero who can’t escape from his past, his present, and the ones that love and admire him. Our hero is a loveable masochist who endures horrible consequences for his inability to conform to the system of The Man.

I could write pages and pages of praises about this movie and what it got right. As far as to what it got wrong? Absolutely nothing, as Cool Hand is close to a perfect movie. as ever was created. Of course, it won only one Academy Award, a well-deserved one for George Kennedy as Best Supporting Actor. After decades of disappointments, we are well conditioned to the whiffs of the Academy.

Luke was the consummate non-conformist and rebel, and it was inevitable that he would attempt to escape from his conscription at the chain gang. His repeated attempts resulted in capture, near fatal beatings at the hands of the Bosses, and a difficult to watch series of scenes where his spirit was finally broken. Or was it? I can’t imagine anyone who has not seen this splendid movie, but I will not reveal any more plot details.

Paul Newman was simply perfect as Luke, and no other actor, past or present could have played this role. His supporting cast was also stellar, with George Kennedy and Strother Martin giving the best performances of their careers. In spite of this movie being over 50 years old, it has aged remarkably well and may very well be Newman’s best performance ever.

The cinematography was nothing short of stunning, vividly portraying the harsh conditions on the chain gang, with the sweaty, dirty and exhausted prisoners. All of these factors, including the flawless directing of Stuart Rosenberg made for a masterpiece of a classic. In spite of all of the aforementioned accolades, the most crowning achievement of Cool Hand Luke was the soundtrack music, composed by Lalo Schifrin. It was just unbelievable. The “Tar Sequence” was used by many TV stations, including ABC as the intro to their newscast and is one of the most recognizable clips ever.

10.0/10.0 With The Goatesians Rating of the Paul Newman’s Greatest Performance