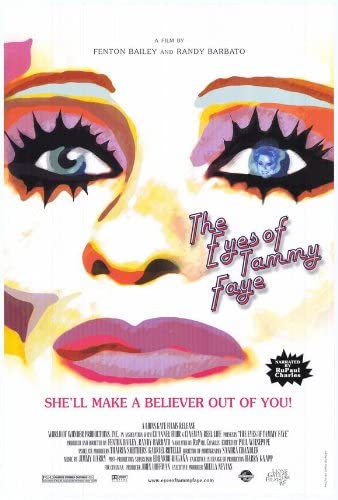 Praise The Lord, indeed. The story of Tammy Faye

Up until a month ago, my exposure to televangelism consisted of two experiences. The first, and recurring weekly, was sitting in the church parking lot after Sunday mass trying to get reception on the little TV in our family van while my parents were at some adult after-church socializing thing and my siblings were in Sunday School (my confirmation classes were during the week, in case you were wondering about me being a heathen in a van). Since this was the early 1990s, the over-the-air television reception (Google it, young-uns) limited me to fuzzy professional wrestling and clear televangelists preaching. Considering I had just sat through sixteen hours of a one-hour Catholic mass, there was no way in hell (yep) I was going to subject myself to more church. Suffice it to say, I read a lot of books, none of which featured Jesus or God’s wrath.

The second, and a much fonder memory, was the South Park episode “Starvin’ Marvin in Space.” If you have never seen that episode, or any South Park episode, I highly recommend you start with that one. One of the themes of the episode is Pat Robertson appearing on a show called “The 600 Club” on the Christian Broadcast Channel imploring viewers to donate money to buy spacecraft and weapons to capture an alien ship piloted by the titular character, or, to paraphrase Pat, to spread the love of Jesus. This was very much on my mind during several scenes of The Eyes of Tammy Faye.

More recently, and one of the reasons my interest piqued in this movie, I listened to an episode of a podcast called “You’re Wrong About” covering Jim and Tammy Faye Bakker. As I was completely unfamiliar with the couple, the episode was fascinating, eye-opening, and horrifying all at the same time. The episode covers a lot of ground, including the alleged rape of Jessica Hahn by Jim Bakker and his associate John Wesley Fletcher, the most well-known piece of the Bakker story. After listening to it, I was looking forward to seeing how the film would cover the Bakkers and the light it would portray them in. Based on a 2000 documentary of the same name, the film The Eyes of Tammy Faye is told from the perspective of Tammy Faye, so a lot of the sordid story was glossed over in the film or outright ignored, including the alleged rape, which is barely mentioned as “that girl keeps calling.” This was quite disappointing from both a historical and dramatic perspective.

The major problem with this film is that it stays at the one-hundred-thousand-foot level, except when it comes to Jessica Chastain’s actual portrayal of Tammy Faye, with a close second for Andrew Garfield’s portrayal of Jim Bakker. There is no commitment to any real narrative outside of Tammy’s personal quirks. Her eye make-up, her guzzling of Diet Coke, her Minnesota accent, her vanity. Every time the movie seems like it is about to focus on a hardship or obstacle, it blinks its eyes and we’re whisked some time into the future where that previous issue has been forgotten. Their car disappears while they are on the road and have no money? Random guy offers them a job working with Pat Robertson at Robertson’s TV network and we jump ahead three years when all is going great. Robertson takes credit for Jim’s “700 Club” show? The Bakkers decide to start their own TV network and we jump ahead five years when all is going great. For all intents and purposes, it’s a Cliff’s Notes version of Tammy Faye’s life from mid-childhood to the collapse of the Bakkers’ lives in 1987. Maybe life really did just hand things to Tammy and Jim on a silver platter, but if so, that’s really boring.

Because the film is mostly reciting basic facts for us, there are no real heroes or villains established for us to root for or against. Normally, we’d gravitate toward the film’s supposed protagonist (Tammy), but the film misses the forest for Tammy’s eyelashes. The most we can muster is a smidge of sympathy because Jim won’t have sex with her any more. Additionally, even a quick search of Jim reveals him to be a slimy con artist using the love of Jesus to wring millions of dollars from gullible believers and, if we are to believe Ms. Hahn (and I very much do), a rapist. Oh, and many of the millions went into the construction of a Christian theme park in South Carolina because nothing says devoted Christian more than water slides and funnel cakes. He even has a henchman. On paper, the guy is one handmaid’s tale away from being a super villain, yet this film portrays him as a meek, pleading, faux Mister Rogers who definitely didn’t rape anybody because did you see the scene implying he might be a teensy bit gay because he wrestles with his henchman on a TV stage for a few seconds? Again, maybe he really was that way in real life, but if so, that’s really boring.

In the end, I didn’t come out of this movie with any more of an impression of the Bakkers than I had going into the film. Most historical fiction and biopics make me want to learn more about the subject matter and fact-check the film, but The Eyes of Tammy Faye just made me want to close my own eyes and take a nap. To be fair, I was interested to know what happened to the theme park, Heritage USA (turns out it was the third most successful theme park in America at the time, after Disney’s World and Land, until the scandals broke in 1987 and Hurricane Hugo mostly destroyed it in 1989, forcing it to close for good). And, as a society, we’ve also learned over the past few decades that televangelists in general are mostly just grifters and criminals perverting religion in order to separate people from their money (the list is long). But what I really learned is that I made the correct decision to read books way back in my childhood van and that South Park got it more right than The Eyes of Tammy Faye.

Rating: Ask for nine dollars back for the film and anything you gave to that guy in the really nice suit preaching on Sunday morning TV.