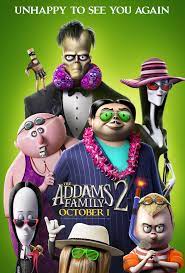 When I was a kid, I loved watching reruns of the old Addams Family TV show. They made me laugh and I liked the spooky factor. As an adult, I cannot watch reruns of that show. They are terrible. And not terrible in the way of watching them through a 2021 prism, but objectively bad. And that’s not just my own opinion. The show was cancelled after just two seasons (though they still managed an astounding 64 episodes) because pretty much everyone thought it was bad. Unfortunately, the schlock that people quickly grew tired of was carried into the film remakes in the 1990s, then again in the animated remakes of the last couple years. Watching this latest entry in the franchise with my wife and son reminded me that the jokes just are not funny and that even kids tire quickly of the nonsense. But don’t take my word for it, take my son’s word for it.

How much of the first Addams Family do you remember?

Uhhhhh…naaaaaah…well, some? I remember that Wednesday started school. In junior high.

Is there anything from the first movie that you think you need to know for the sequel?

What were you hoping to see in the sequel?

After watching Addams Family 2, did it meet your expectations for creepy?

How would you describe Addams Family 2, if not creepy and mysterious?

What was the main plot?

They go on a road trip and they’re trying to avoid having this lawyer trying to get Wednesday back to her original family.

Do you know what a subplot is?

Like a minor plot or other stories. Are there any other plots going on?

I don’t think so.

Are there any other Addams family members on the road trip with them?

I don’t know the name…like, the gramma. And she hosts parties forâ¦.two weeks? No, three weeks.

Who is everyone else?

There’s 3 more?! [facepalm] Oh! It was Uncle Fester! And then I don’t remember his name, the hairy guy.

So where did the family go on the road trip?

Did they visit anywhere spooky?

What was your favorite part of the road trip?

Well, they went to that guy’s house in California. The guy that tried to steal Wednesday.

But what was your favorite part of the road trip?

When Pugsley blew up the Grand Canyon.

Why was that your favorite part?

Would you say the movie was more funny than anything else?

What part of the road trip do you think was the most boring part?

Let me put it this way, which part did you like the least?

When they went to Sleepy Hollow.

Because they just talked about….oh! the lion is also there!…They just sat around, telling stories.

If you could take a part out of the movie, what part or thing would it be? That you didn’t think needed to be there?

I feel like they didn’t need to do the Texas– oh! They went to Texas! And saw those motorcycle guys and they were at a bar, and Lurch was there too with Wednesday.

If you could add something to the movie, what would you add?

A few more places that they went.

Name one. Like, where would you make them go?

They could see the Great Lakes.

How would that fit in with the Addams Family?

[snarky and sassy] They went to NIAGARA FALLS, dad.

Is there anything spooky about the Great Lakes?

Why would he be in the lakes?

Who is your favorite character?

I can’t think of any more questions.

[Mom from the other side of the room] Because it was a boring-ass movie.

Would you watch it again?

Rating: If people go to the theater to see it, how much money should they ask for back?

I think they want back 2 dollars. I think the movie could have been a little better. Because there were no mysteries, no really spooky things. No [sings X-Files theme song]