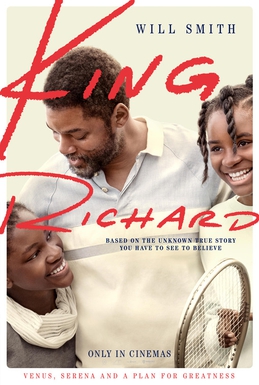 Athletes are people, too

Over the last few years, I’ve had the opportunity to get to know a few retired Major League Baseball players at the Colorado Rockies fantasy baseball camp. The first time they walked into the room with us, I turned into the nine-year-old me that fell in love with baseball. I was practically giddy at the idea of eating lunch in the same room with these guys, let alone playing baseball while they coached us. Fast forward two days and five games to when my adult self had returned, was in a not insubstantial bit of pain and drinking beers with these same guys at the hotel bar discussing games and pain. They were no longer those icons on the other side of a television screen, but flesh-and-blood humans just like the rest of us. King Richard is a film that reminds us that tennis players are people too.

(SPOILER ALERT – Serena and Venus Williams are kind of good at tennis.)

King Richard gives us a glimpse into the childhoods of Venus and Serena Williams (portrayed by Saniyya Sidney and Demi Singleton, respectively). Two of five sisters, they are driven to practice tennis relentlessly by their father, Richard (Will Smith), who believes the two girls are the next tennis superstars. Did I say believes? What I meant to say is that he is so certain about it, that he wrote a seventy-eight page plan to achieve tennis greatness before the girls were even born.

So, who was Richard Williams, our title character? Well, he most certainly was not a tennis player. Born in Louisiana in 1942, he grew up in the deep, very racist South of the 1940s and ’50s, picking cotton as a young man and eventually finding his way to California. The film does not show us this, but we learn bits of it from Richard either during lessons with his daughters, arguments with his wife, or telling off the rich, white, country-club folks.

The film itself starts with Richard searching for a coach for Venus and Serena to take them to the next level. Dressed as a wannabe tennis player circa 1982, complete with high tube socks and short shorts, he has videos and a speech he gives to prospective coaches, a speech that includes asking for coaching at no cost. Naturally, these rich white folks have no interest in pro bono work for a man they believe might just be homeless and is probably crazy. So, in between his night job as a security guard and searching for a coach, Richard trains the girls himself through sun, night, rain, gang member harassment, and the occasional neighbor calling child protective services on him for making them practice so much. It’s a great first act that develops the characters of Venus, Serena, Richard, and Richard’s wife Oracene (Aunjanue Ellis), while also establishing their current place in the world. Namely, Compton.

Finally, Richard catches a break, and by break I mean interrupts a practice between John McEnroe and Pete Sampras, to solicit their coach, Paul Cohen (Tony Goldwyn). Like everyone else, Paul is not interested, but Richard won’t be deterred. After McEnroe walks off the court, Richard convinces Paul to give the girls a look, with a little assist from Sampras (I really need to research this to find out how accurate this scene was). After running the girls through some drills, Paul has a change of heart and agrees to train Venus. Thus begins the heart of the film where the Williams’ fortunes start to turn and Richard’s plan really goes into action.

From this point on, we follow Venus through her training with Paul, a string of Venus winning Juniors tournaments, and Richard constantly rubbing Paul the wrong way by being the biggest helicopter parent in the history of sports. Having presumably honed his patience and professionalism by coaching the infamously volatile McEnroe, as well as recognizing the talent in Venus, Paul suffers through Richard’s obnoxiousness to continue coaching Venus. During this time, Oracene (the mom) is training Serena, as Paul was only willing to coach one girl for free.

As good a performance as Goldwyn delivers, he is dwarfed by Jon Bernthal’s performance of Venus’ next coach, Rick Macci. After Paul is unceremoniously released by Richard, Richard contacts Macci, who runs a tennis coaching facility in Florida and has recently hit the big time with the rise of Jennifer Capriati. Bernthal gives a devastating performance as Macci, who sees nothing but dollar signs the moment he lays eyes on tape of Venus dominating Juniors, but is increasingly frustrated by Richard constantly moving the goalposts on Macci. Macci wants to start cashing in on Venus as soon as possible, but Richard forces Macci to accept Venus merely training for three years before allowing her to play another match, including in Juniors. Richard is afraid of releasing the world on Venus before she is ready for it, and who can blame him? The world is a tough enough place without adding the insane pressure of professional tennis onto a 14-year old. And while Macci grudgingly accepts this reality because Venus really does have hall-of-fame, best-ever potential, he’s clearly close to running Richard over with his Fiero.

The film culminates with Venus’ first professional tournament and Venus and Richard meeting with potential sponsors looking for endorsements. What makes the film work so well is how it builds to this moment. While Richard is the title character and ostensibly the main character, just like in real life, he fades to the background as Venus (and Serena) take the spotlight. Along the way, Ellis is also crushing her role as Oracene, going toe-to-toe with Smith in several scenes where she puts him in his place. All of these characters push each other toward the climax, resulting in a remarkable conclusion where are of the characters receive closure on this particular chapter of the Williams’ story.

Venus and Serena broke out into the tennis world when I was in high school and I remember a lot of focus on Richard. Sports pundits and fans alike had nothing good to say about him, accusing him of being an egomaniac, overbearing father or a rude, uncouth jerk who doesn’t understand that tennis is a classy sport (among other accusations). Even now, some critics are dismissing this film as an attempt to rehabilitate Richard’s name in an effort to rewrite the history as originally told by ESPN and sportswriters of the time. Except, that history is probably bullshit to begin with, especially given the level of systemic racism still present in this country today and definitely very much present in a 1990s tennis world where the number of black tennis players could be counted on one hand.

The one consistent thread in interviews and other accounts is that Richard was a caring father and coach, just trying to do the best by his kids (driven home by a scene mid-film that is one of the most powerful character-building scenes in the film). It’s really easy to believe that the hot-takes of the time were rooted far more in implicit bias than actual reality, given how exceptionally white the sport of tennis was and the way the Williams sisters and their parents were often talked about (a whole lot more focus on mom and dad and hair beads and outfits than on, you know, tennis matches). What those same critics get right is that the film is a rehab of Richard, but in the vein of a correction rather than a whitewash. It’s a film that depicts Richard as a person and, even better, his daughters as human beings instead of the impossibly lofted tennis robots that the sports-yak world tells us they are.

Rating: Worth twice as much as you paid for it, even if you could not care less about tennis.