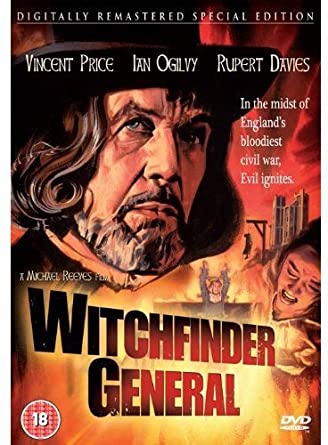 Men sometimes have strange motives for the things they do

“Men sometimes have strange motives for the things they do.”

So says Matthew Hopkins, Witchfinder General, and one of this brutal flick’s coarse joys is trying to work out his.

Does he really believe he’s doing God’s work? Or is he merely an opportunist, a man happy to take advantage of the breakdown in law and order during the English Civil War to profit while feeding his own demons?

I’d say you don’t get an answer, but what you do get is a searing depiction of human behavior at its absolute bloody worst. Clocking in at a lean 87 minutes, it just gets more and more vicious, its many scenes of graphic violence far more unsettling than those contained in the equally controversial (but much better known) The Wild Bunch, which came out a full year later.

Of course, one of our greatest failings as a species, apart from turning Matchbox 20 into a very successful band, has always been our desire to kick other people. It’s a tendency we can’t get rid of, repeating itself endlessly throughout history. We love labeling individuals or groups as a threat to other humans. A pox that needs eradicating, whether they be communists, gays, gypsies, Jews, sex offenders or racists. Such folk certainly don’t need to be guilty. The mere perception is enough for the persecution to get underway.

And it’s this diseased aspect of human behavior that Witchfinder explores. Starting with some peaceful shots of the English countryside, director Michael Reeves quickly tires of such tranquility and instead drops us straight into hell. A man is hammering together a gallows on a hill as a screaming woman is dragged toward its base.

Hopkins is in town along with his assistant, John Stearne. Hopkins is a complex, quick-thinking man, who keeps his cards close to his chest and is not easily flustered. At times he’s even brave. Presenting himself as honorable and virtuous, he certainly likes to think he’s above his helper’s sadistic yen for inflicting pain.

“You enjoy torture, don’t you, Stearne?” he asks on their way to interrogate a priest accused of idolatry and Satanism.

“And you?” comes the smirking reply.

Hopkins gives a sharp look, obviously irritated at the less than respectful answer, but remains silent. Perhaps he’s trying to work it out himself. What is apparent is that this stinking hypocrite prefers to hide his involvement in mayhem behind God and the veil of officialdom.

The thickset, pipe-smoking Stearne is a lot easier to read. He’s a hedonistic yob, happy to chuck his guts up after a night’s drunken whoring before plunging straight into a prolonged bout of torture. This often involves beating chained women in dungeons or sticking needles into a pinioned person’s back. He’s no fool, though, and unlike Hopkins, doesn’t even start to pretend their money-making work is anything other than a sham. That’s why his voice often contains an undercurrent of contempt when discussing matters with his outwardly respectable boss. He also knows hunting witches won’t last so it’s best to make hay while the sun shines.

Interestingly, Witchfinder doesn’t delve into the reasons behind the persecutions or offer the slightest explanation why such a shameful craze swept Colonial America and so many parts of Western Europe. Neither does it explore what such violence does to a person’s religious beliefs. Reeves prefers to simply depict events and leave it up to the viewer to interpret. Indeed, the vast majority of villagers offer no objections to the interrogations and executions while some actively collaborate and enjoy watching the ghastly abuse. Perhaps old scores are being settled. Perhaps they really believe the devil is among them.

But when Hopkins speaks of the “foul ungodliness in womankind” and later says “Strange how much iniquity the Lord vested in the female” it’s apparent that misogyny is at least one driving factor.

There are so many standout scenes here, such as the triple ducking, the heel of a boot being used as a weapon, and a bunch of children cooking potatoes in the smoldering ashes of a burnt witch. The phrase “You took him from me!” will also stick in your head long after trying to digest this one.

A different director might have chosen to leaven the relentless cruelty with at least a bit of black comedy or a joke or two. Reeves, however, plays everything straight, even managing to rein in Vincent Price’s renowned fondness for flippancy. The pair famously didn’t get along on set, but the result is arguably the most disciplined and impressive performance of Price’s great career.

Witchfinder is a bloodthirsty masterpiece. Along with The Wicker Man, it gets my vote as the best British horror movie ever made.