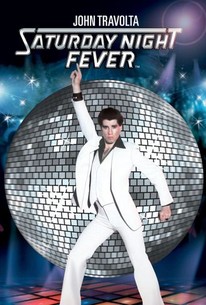 A Brooklyn teenager begins groping his way toward maturity

You’d think the sight of a bloke walking down a street carrying a tin of paint isn’t much of an opening for a movie.

But we’re talking John Travolta in his pomp here, and he’s not just walking, he’s strutting like an electrified peacock to those falsetto disco gods, The Bee Gees.

And this, ladies and gentlemen, is most definitely a portrait of a ladies’ man.

Indeed, this simple introduction is so vivid, so fantastically vibrant, Travolta doesn’t need to say a word for you to grasp every aspect of his teenage character, Tony Manero. Dressed in a black leather jacket, open-necked red shirt and gold chain, he’s either checking out the passing talent or the next pair of shoes to buy. He’s gloriously young, bursting with life, and so far up his ass it’s a miracle he isn’t bumping into lampposts.

And this is Tony merely returning to his menial job at a downtown Brooklyn hardware store. Wait till you see him at 2001, the nightclub where he and his dipshit mates are ‘faces’. But to get to the dance floor, that hallowed territory where he shrugs off his lowly status and becomes a king, he first has to prepare.

This is a painstakingly self-involved ritual that borders on the religious. Clad in tight black undies in front of a mirror, he brushes and blow-dries his marvelous head of hair, slips on two gold chains, and agonizes over the right shirt. Even though there’s no music in his bedroom, he can’t keep still. The groove is already flowing through his slim, toned body, its insistent nature making his hips sway as he slowly draws up his fly.

And as he preens and primps, he pictures the heaving dance floor, that site of communion, certain that anything and everything is possible. With every strand of hair in place and his cleft chin polished, he departs for 2001.

Now this is some place, surprisingly devoid of meathead bouncers, fights or abusive drunks. If you need a breather, you can sit at one of the quieter bars and watch a well-endowed, dancing stripper. If you pull, you can take the girl out to your car on the street and fuck her while your chatting mates peek in through the window.

Or if none of that is to your liking, why not just be amused by the resident DJ’s ramblings? He’s a mustachioed fool who likes to tell the jiving crowd: “You’re so beautiful. I like your new haircuts. I like that polyester look.”

When Tony enters 2001, pretty much everybody acknowledges him. It’s Cheers times one thousand, not so much the place where everybody knows his name but the place where he is loved. You totally get why every weekend visit takes the form of a pilgrimage.

Not only that, but he’s a pussy magnet, and I’m not talking about one of those silly little horseshoe ones. Oh, no. I mean those full on electromagnets used in junkyards to swing around giant heaps of metal. The opposite sex doesn’t have the slightest chance against this dude’s awesome pulling power.

“Are you as good in bed as you are on that dance floor?” one asks while another drunkenly demands to be kissed. Then there’s the girl who sidles up to him clutching a handkerchief. “Can I wipe off your forehead?” she asks without a trace of self consciousness. With a gracious nod, Tony consents and we all know she’s later gonna do some weird shit with that slightly soiled piece of cloth. It’ll either be framed or she’ll lie on her bed sniffing it and flicking her little pea. Honestly, a lot of these women are blunt, creepy and embarrassing. Seeing them collectively lose their shit over this boogying Narcissus made me appreciate how icky and desperate so many wheedling guys must appear to the average attractive female.

When we finally get to see the lithe Tony bust out his moves to Disco Inferno, it’s both mesmerizing and hysterically funny. He’s a whirling dervish of twirls, knee-bends, revolving hands, pointing fingers and hip thrusts. The sight makes for dated yet compelling cinema and one that was crying out to be parodied in the likes of Airplane!

But for Tony his feverish commitment is total, the one thing in his life that means something. Or as he says to a mate: “You make it with some of these chicks and they think you have to dance with them.” That’s right, folks. In Tony’s world, dancing is more important than getting laid. Whereas mortal blokes cling to the hope that dancing might lead to fucking, Tony’s irked by those presupposing women who think that fucking might lead to dancing.

That’s so extraordinarily back to front I still can’t get my head round it.

But one of the joys of Fever is its continual surprises. Yes, you’ll undoubtedly snigger at parts of this 1977 time capsule, but don’t go thinking it’s some wishy-washy kid’s movie. Believe me, it’s got a mile-wide mean streak. Just take Tony’s mates. On the whole, they’re not a pleasant bunch and neither is Tony, their de facto leader, when he’s with them. They talk of spicks and niggers while intimidating gays on the street. David Bowie’s a ‘faggot’ and less attractive women are ‘charity cases.’ Fever is awash with laser-sharp, foul-mouthed dialogue that’s capable of making you wince. “Are you a nice girl or a cunt?” Tony casually asks a dance partner. “Girls’ve gotta decide that thing early on.”

Indeed, some scenes are genuinely uncomfortable. This is a world of racial tensions, brutal disappointments with the opposite sex, life-threatening anguish at prospective fatherhood, rape, violence and familial bust-ups. Tony Montero stands in its middle, initially at ease with its mores and demands, as exemplified when he asks his boss for an advance to go clubbing. Instead he gets a mild lecture on the importance of saving, of thinking about the future.

It’s a key quote and one which sums up his hedonistic approach to living one hundred percent in the present. But what Fever’s so good at is capturing Tony at the point where he’s just starting to tire of the casual sex, racism, dickhead mates and the thought of getting stuck in his dead-end employment. This guy might not read books yet, he might not understand that talking and eating are separate activities, but at least he’s starting to appreciate his lack of education and class are holding him back.

Tony knows he’s got to find something better, something more substantial. These suspicions are intensified when he starts dancing with a new partner. She’s not exactly likable, but she’s a bit older, better educated and trying to make something of her life. And one thing’s for sure, she’s got Tony’s number. “You’re a clichÃ©,” she tells him. “You’re nowhere on your way to no place.”

When it comes down to it, Fever isn’t about Tony’s obsessive love of dancing but his need to put it aside and find something less fleeting. You can’t build a future on a weekly endorphin rush beneath a glitter ball on a silly multi-colored floor, especially when there’s some idiotic DJ babbling: “Feel the music, baby.”

The 23-year-old Travolta is simply magnetic here, vividly bringing to life every instant of his Catholic Italian-American blue collar life whether it’s the combative meal times at the family table, disappointing a smitten admirer or his pride in getting a small pay rise. Justifiably Oscar-nominated, it’s the best starring debut I’ve ever seen.

Of course, Travolta had already announced his potential in Carrie a year earlier when he’d brilliantly played the girlfriend-slapping, pig-killing redneck, Billy Nolan. However, in Fever he seizes his moment in the spotlight and takes everything to a whole new level. His later career would bring other fine performances, such as the tortured sound technician in 1981’s underrated Blow Out and, of course, his career-reviving turn in Pulp Fiction, but this is his key movie.

He would never be so dynamic again.

Dave Franklin has written a dozen books or so. We are not talking about James Joyce here, these books are short novels and easy reading. You can find them here at amazon.