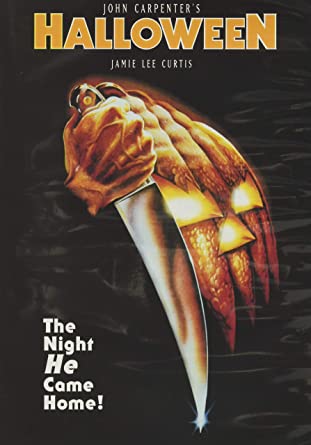 A masked, knife-wielding nutter returns to his hometown

The most surprising thing about Jamie Lee Curtis’ career-launching turn as Laurie Strode in this late seventies slasher is how dull she is for nearly all of it.

And I don’t mean dull in an interesting way.

Perennially clutching books, agreeing to yet another babysitting job, addressing her elders as ‘sir’, listening intently in class, and stoically absorbing mild jibes about her virginal ways, her dowdy nature is underlined by our first sight of her in a clashing, faintly awful outfit.

Fucking hell, she could be Carrie White’s sister. I reckon I’d look sexier in a cardy, knee-length skirt and plain shoes ambling along Haddonfield’s autumnal, leaf-strewn streets than she does. Honestly, it’s lucky Halloween was such a smash because this mousey central character would’ve deservedly been swallowed up by oblivion otherwise. Is this really the same girl who’d go onto Trading Places playing a hooker with a heart of gold and even more valuable bare breasts?

About the most interesting thing Laurie does in Halloween’s first half is take a couple of hesitant tokes on her friend Annie’s joint. Of course she screws up her face and coughs.

By the forty-minute mark she’s ditched the knee-length socks for an equally dull pair of slightly flared blue jeans and a sweater. Now she’s reading to a child, but he complains the book is boring. He suggests trying a stash of comics that his mom disapproves of, but Laurie sides with the absent parent.

“Laser Man?” says this 16-going-on-55-year-old teenager, who’s slipped into the dull habit of twirling her hair. “Tarantula Man? I can see why.”

At this rate, I’m wondering why Michael Myers would bother even trying to kill Laurie. Surely it’d be more of a punishment leaving her to live an ultra-sensible life that no doubt would later involve embroidery, a healthy diet, regular exercise and at least three Coldplay albums.

Help, now she’s wearing an apron and doing the washing up. Please, Michael, where are you? I’ll give you money, anything you want…

Annie drops by, prompting Laurie to mildly protest at being set up with a date for the upcoming homecoming dance. Still apron-clad, Laurie then warns the two kids she’s looking after not to scare each other or do any other remotely normal kid things.

Realizing something’s up across the street, the apron and sweater finally come off. Is this it? Is this the moment she transforms from a face-clawingly tedious nonentity into a plain old boring one?

Creeping in through the darkened house’s open door, she calls out to her friends. “All right, you meatheads, joke’s over. C’mon, Annie, that’s enough. It’s most definitely stopped being funny. Now cut it out. You’ll be sorry.”

Is it me or does she sound like Annie’s mom?

Now we’re in the last fifteen minutes and Laurie stumbles across three corpses, who may have been whacked by The Shape or simply topped themselves at the thought of ever enduring Laurie’s company again.

Understandably she loses her shit at the gruesome discovery before the lurking Michael (with the element of full surprise) fails to land a clean blow on her. Great, just when you need the guy to be a competent killer he inexplicably can’t even stick a blade in her turned, unprotected back. His ineptness actually made me groan.

Laurie, meanwhile, remains that most dependable of babysitters by making sure the children are safely locked away. Christ, give this girl a pay rise. She runs outside to get help from the neighbors, but they all know how yawn-inducing she is and promptly close their blinds. The last thing they want is to have their Halloween ruined by putting up with Laurie bloody Strode’s uneventful conversation.

And then, after eighty-three long minutes, Laurie finally gets a good scene when she seeks sanctuary in a closet and fashions a pointy weapon out of a coat hanger to fend off the lunging killer.

Movies can be an awful disappointment and by the time Halloween Ends comes out next year Michael Myers will have spent about eleven hours trying to eliminate this personification of monotony. Let’s hope he teams up with the likes of Jason, Freddy, the Predator and a couple of xenomorphs to finish the job.

As you can probably tell, I don’t feel Halloween’s juggernaut-like success is down to Jamie Lee Curtis. I think she could have been fished out and replaced by another competent actress without the movie skipping a beat.

Indeed, Halloween’s legendary status isn’t really to do with any of the average performances, but rather John Carpenter’s terrific direction and killer score.

Dave Franklin has written a dozen books or so. We are not talking about James Joyce, as these books are short novels and easy reading. You can find them here at amazon.