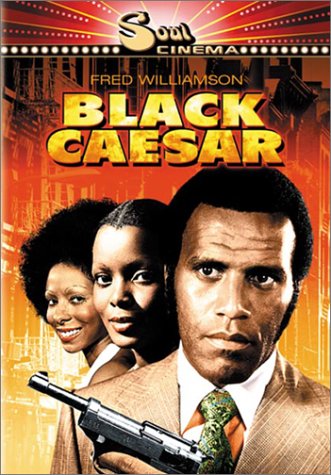 An ex-shoeshine boy takes on the Mob in Harlem

What the hell are these cats up to? After a stretch in prison, Tommy Gibbs (Williamson) plans to take over his Mafia-run neighborhood and show whitey how it’s done.

Do I dig the threads? Given it’s mostly set in 1965, a heartbeat before everything went to sartorial shit, yes. Tommy favors sharp suits and a bowler hat. Only his extra long sideburns don’t really work, but he’s a long way from the ridiculousness of Super Fly’s Youngblood Priest. Thank God for that because it’s hard for a gangster to maintain an air of menace when he looks like an absolute tool.

Is there a racist cop keeping the brothers down? Oh, Lordy, yes! Meet Captain Jack McKinney (Lund). Back in 1958 the teenage Tommy crossed paths with him after handing over a payoff at his apartment. The first words out of this cop’s mouth are: “You know that niggers aren’t allowed in this building?” McKinney’s got a face like granite, a shock of blonde hair, a neatly pressed uniform, and the unmistakable air of Caucasian superiority. “You’ve got more to be afraid of with me than anybody,” he tells Tommy. “I’ll cut your black balls off.” He doesn’t quite do this, instead accusing the boy of theft and breaking his leg with a truncheon.

This bout of violence sours Tommy and gives him one helluva chip on his shoulder when it comes to honky bastards.

How are the bitches and hos treated? Tommy’s woman is a singer called Helen (Hendry). He’s happy to put her in danger to get what he wants, but when she tires of his criminal lifestyle she gives him the ‘cold routine’ in bed. Luckily, he has the solution. “So this is the way you like it, huh?” he says as she rebuffs his kisses. “You have to be raped? Well, I got no objections, lady.” Then he does just that, but don’t worry, he quickly buys her something slinky from Bergdorf Goodman so that she can continue to look good whenever the urge to rape her seizes him again.

Later on (after his mother’s funeral) his lawyer’s curvaceous white wife turns up at his apartment, obviously looking to console him by imbibing his big black dick. Amazingly, he throws her out. This guy is fucked up.

Then he goes back to slapping Helen, flinging her around, and plain terrifying her.

Are any hard drugs injected into eyeballs? Black Caesar is particularly weak here. I can’t recall any hard drugs at all. In this sort of flick I expect to see my dark-skinned brothers being kept in their rightful place by the scourge of narcotics as chuckling whitey looks on from his ivory tower. Tommy and his cronies prefer alcohol and tobacco. Very disappointing.

Best jive talk: Black Caesar was written by a white man and it shows in the dialogue. Larry Cohen has no ear for the street, resulting in a movie in which blacks sound like whites. Still, it has its moments.

“Sauce looked like it needed a little more meat.” Tommy’s perfectly reasonable explanation for chucking a severed ear into a gangster’s spaghetti.

At a sit down with Mob bosses, Tommy offers his services. “Let’s take a look at Harlem,” he says. “Who’s gonna control these people? Those goddamned Puerto Ricans and those niggers. They’re too stupid to be afraid. They’ll stick a shiv in anybody. It’s a jungle. And it takes a jungle bunny to run it.”

“I’m gonna make you real pretty.” Tommy, the ex-shoeshine boy, rubs black shoe polish on McKinney’s face, meaning he’s now a blackface. Obviously a white man impersonating a black man (even if done under extreme duress at gunpoint) forms the most offensive part of the movie.

Does it have funky music? James Brown and gangsters? It’s a match made in heaven. In the year the Godfather of Soul released arguably his best album (The Payout), he also found the time to supply a decent soundtrack, especially the opening song Down and Out in New York City and the really groovy The Boss. However, he also contributes Mama’s Dead. Can you guess what it’s about? “Mama’s dead,” he bleats. “Never again will she hold my hand.” Frankly, it’s maudlin pap. You’ll have to go and stand in the corner for that one, James.

Are there any pimps roaming the hood? No. Or drug dealers. In fact, I’m not even sure how Tommy makes his bread. Perhaps he sells life insurance on the side.

Is Black Caesar any good? No, not really, but it did pretty well and a sequel was released the same year. Black Caesar has a lot of problems, including simplistic writing and some poorly developed characters. There’s a preacher in it for some reason and a best mate known as The Brain because he, er, wears glasses. Writer-director Cohen, who had an interesting career, just feels wrong for this material. The locations are occasionally effective and the odd scene works, but the acting’s rudimentary and the violence unconvincing. Despite a fairly high body count it lacks tension. My search for top quality blaxploitation goes on.

Do I now have a Tarantinoesque urge to be black? ‘Fraid not. Tommy Gibbs (doesn’t sound like a black gangster’s name, does it?) really fails to have a good time before his inevitable comeuppance. He doesn’t indulge in the old nose candy. There’s no pimpmobile. None of his mates are a laugh. He’s not much of a stud. Then there’s the rape and I must be strict here and deduct a few points for that. Most of the time Tommy just wants to get even with whitey, resulting in a resentful main character that can’t enjoy a thing. He does buy an apartment in a whites-only block for his honest, hard-working mama (“Jewish folk ain’t even allowed in here!”) but, of course, she doesn’t want it. Tommy dresses better than me and no doubt his penis is bigger, but it’s still a thumb down.