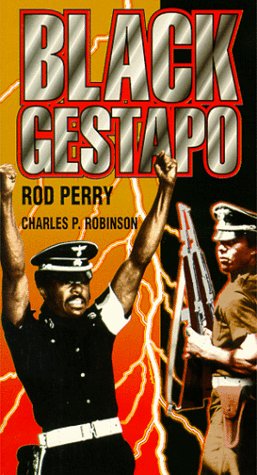 What the hell are these cats up to? Rape and castration, mainly. General Ahmed (Perry) has started an inner-city People’s Army in south LA to improve everyday black life and tackle pressing issues like drug addiction. However, he runs into big trouble with the Mob, leading him to grant permission for his deputy Colonel Kojah (Robinson) to set-up a six-man ‘security force’.

Unfortunately, this taste of power prompts Kojah to rename the People’s Army and secretly acquire a three-acre HQ that I think is supposed to be the combined equivalent of Hitler’s Berghof and Wolf’s Lair. Well, it’s got a tennis court, a swimming pool and plenty of parking. Five minutes later he’s launched a race war, which includes making everyone a Nazi, dealing lots of drugs and having sex with trophy white women.

Is there a racist cop keeping the brothers down? When ordinary folk fall victim to extortion, rape, gunshots and life-threatening assault no one thinks of calling 911, thus denying the viewer the chance to witness some good old-fashioned bigoted police indifference and/or brutality.

In fact, cops (racist or otherwise) are bizarrely absent throughout, even though there’s a black paramilitary army waging war with white gangsters and goose stepping all over town. I dunno, maybe they had a lot of choir practice and therefore no time to deal with a budding Fourth Reich.

How are the bitches and hos treated? Flipping heck, we’re back in Mandingo territory. The ladies sure do have a tough time here. Things get off to a rough start when two gangsters, the burly Vito and his sidekick Ernie, hassle a black nurse on the street in broad daylight. Well, I say hassle, but they’re so obnoxious they make Ted Bundy look refined. “You feeling lonely?” is Vito’s initial attempt to win the nurse’s heart.

Clumsy, yes, but not exactly offensive.

Nonetheless, he soon abandons wooing her. “How about getting laid?” At least Ernie finds him funny, giggling like a naughty schoolboy. Then: “How about five bucks for a blow job?” Met with yet another snub, Vito tires of his stab at romance, grabs her left tit and knocks her to the ground.

Later, Vito and Ernie again demonstrate their feminist credentials by roughing up a junkie white hooker lying in bed. Vito, who at this point still proudly possesses testicles, rips the pink covering off her to reveal she’s nude. With an appreciative glance at his mate, he says: “Nice tits. Nice legs. Nice bush.” At least he’s learning some restraint. Asked if she’s been keeping back payments, the hooker strongly protests, prompting Vito to revert to type. “Coz if you were, Ernest and I are going to remove your tits, shorten your legs and set your bush on fire.”

Dunno about you, but I’m picking up on an implied threat here.

Then he wants to know where her pimp is, but her unsatisfactory answer results in a slapped face. Did I say slapped face? I meant repeatedly smashing the back of her head into the bedroom wall. Once she coughs up the required info, Vito smiles, has a quick feel and leaves with the parting remark: “You see how easy that was? Now you get to hang onto your tits.”

Amazingly, Vito decides he still needs to work harder to win that chance to audition for I Spit on Your Grave. After spotting the nurse he earlier assaulted, he beats her beau up in a parking lot and abducts her in his car. “Okay, bitch, you can scream your head off, but no one’s going to hear you out here.” He then tears her dress open and rapes her.

I’m starting to think Vito didn’t get enough love as a child.

Right, back to the drug-addicted hooker. Five Gestapo members visit when she’s sick with withdrawal symptoms because her dealer-pimp has gone missing. She agrees to pleasure all five in exchange for some dope. I don’t know if that means individually or simultaneously. Anyway, the same pink bed covering gets slowly pulled down again to reveal full frontal nudity, leaving me convinced this poor actress needs to fire her agent pronto.

Elsewhere, women are used as honey traps and bikinied decoration, although special mention must go to the gangster boss’ topless girlfriend. At one point Ernie wakes him up at night to discuss Vito’s unfortunate gonad loss. The girlfriend remains in bed, obviously irritated by the interruption to her beauty sleep. There are many gratuitous shots of her turning over in bed, which must be applauded, but for some reason her breasts don’t move. And by that, I mean they refuse to wobble or jiggle in the slightest, let alone bounce. The plastic nature of her baps is so noticeable I had to replay those shots seventeen times just to make sure.

Do I dig the threads? You can say what you like about the Nazis, but those fuckers sure as hell knew how to dress. I’ve never seen a goofy-looking Nazi in my life. Hence, the blacks easily win this fashion battle, especially as the white gangsters are a sartorial shambles. Unkempt tashes, gold medallions, garish shirts, mismatched slacks… Christ, I think one guy is even wearing hair spray.

Does it have funky music? Gestapo replaces the funk, soul, R and B favored by the other blaxploitation I’ve seen with hip hop acts like Public Enemy. Songs seem hastily slapped on the beginning and end and don’t fit with the action at all.

Best jive talk: Like Black Caesar, you can tell this one was written by whitey in that it routinely lacks those special turns of phrase I so enjoy. Still, it has its moments.

“No one’s going to respect you if you don’t respect yourselves. You have got to get it together by yourselves for yourselves. Martin Luther King had a dream and it was blasted into eternity with him. I offer you reality. You’ve got to stand tall and demand your rights. No one’s gonna give you a damned thing.” General Ahmed doesn’t sound too much like a black guy from the 70s, does he? But at least his recruitment speech to a small crowd at the start of this fiasco represents credible writing, a feature sadly absent from this moment on.

“They all look alike to me.” Ernest’s groan-inducing observation to Vito after being asked if he fancies the black nurse.

“Go ahead and rape me, you honky bastard. I bet this is about the only way you can get laid. Is he gonna help you get it up?” Now I’m no expert on rape prevention, but I don’t think that’s the best thing to say to Vito and Ernie.

“Don’t panic, man. This will only take a second.” Colonel Kojah enjoys his moment of revenge when he takes out a cut-throat razor, slices Vito’s nuts off in the bath and (in a nice touch) flushes them down the toilet. Perhaps he’s also auditioning for I Spit on Your Grave.

“You jive-ass nigger. You’ve been shit from the very beginning.” After an impromptu visit to the Gestapo’s Playboy Mansion, sorry HQ, Ahmed sits on the fence instead of giving an opinion about his second in command.

Are any hard drugs injected into eyeballs? Vince, the gangster boss, is a heroin dealer. Or as he tells a roomful of subordinates during their weekly get together to cackle while rubbing their hands together: “These blacks like smack.” Vince (played by the director Frost) is one of the many problems with this flick in that he’s intentionally presented as effete and ridiculous. Think Captain Kevin Darling in Blackadder Goes Forth. In other words, comic relief. This begs the question: How has he climbed the ranks and why would the other gangsters take notice of such a toupee-wearing, dog-fawning idiot?

Are there any pimps roaming the hood? Yes, but we never get to meet him. The aforementioned junkie hooker with the pressing need to find a new agent has probably already told him about Vito and Ernie so he wisely stays out of sight.

Is Black Gestapo any good? Fuck, no. After the fun of Three the Hard Way, this was a sour comedown.

I wouldn’t say the title’s a misnomer, but the Gestapo only turns up for the last half an hour and prefer to march around on a tennis court and shout Vengeance! with their fists in the air rather than do any proper Nazi stuff like getting the thumbscrews out, invading Poland or experimenting on twins.

Plus, I thought the real-life Gestapo was the secret police, cowardly fucks who tortured naked prisoners in cells, rather than full on warriors who went into battle. Didn’t they mainly don plain clothes as well? Still, at least Hitler gets an IMDB credit for his brief appearance in Gestapo so I’m sure he’ll be pleased (wherever he is) at appearing in a movie of such stature.

There are all kinds of problems here, though. Taken together, they make ninety minutes of amateur hour, especially the recently gut-shot Ahmed’s comical solo assault on the Gestapo HQ. I do think the title’s great and there’s some kind of bold idea begging to be played with, but it’s woefully executed. I guess it made sense for Kojah to take on the Mob, but why immediately fuck over his own people by increasing prostitution, extortion, violence and drug dealing? And what black man in his right mind thinks the way forward is to literally behave like a Nazi?

Gestapo is in turns camp, vicious and unintentionally funny (witness the scene where Ernie gets run off the road by a female tit-flasher). Planting Sieg Heil chants over Black Power salutes also enables the pic to wander dangerously close to provocative commentary. It’s a stupendous mess, all right, but add everything up and I s’pose I recommend it because I doubt I’ll forget the bloody thing in a hurry.

Do I now have a Tarantinoesque urge to be black? No, this one makes me treasure my lily white skin.