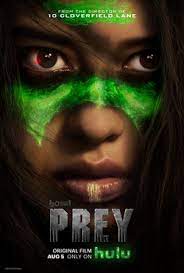 We can still see you Mr. Predator guy

“Prey” – We can still see you Mr. Predator guy.

I don’t know who is clamoring for more Predator movies, let alone one that takes place in colonial America, but Prey is the latest installment in the Predator franchise. Clearly, neither does Twentieth Century Studios, as Prey is going directly to Hulu+. Do they really think people will subscribe just for a movie that tries to hide the fact that it is a Predator movie by not calling out such in the title? I don’t, but then again, far too many people watched Tiger King on purpose.

Why does the Predator always seem to play to its opponents’ abilities? Predator took on aliens and held its own. Predator lost to a beefed-up Adrian Brody in Predators. Predator was bested by a forty-four-year-old Danny Glover in Predator 2, a Glover who was already getting too old for this shit four years earlier in Lethal Weapon. Predator even took on prime Arnold Schwarzenegger after intentionally removing all its weaponry, then promptly losing to Arnie’s booby traps. In Prey, we get to see another Predator constantly playing down, this time to a range of game, from a rattlesnake to a bear to a bunch of Comanche in the early 1700s. You read that right, the early 1700s.

Let me rephrase what you just read. Twentieth Century Studios thinks there is an audience that wants to watch one of the most technologically advanced and fearsome hunters in the galaxy go head-to-head with a young girl wielding a hatchet nearly one hundred years before Lewis and Clark brought smallpox to the west. Hell, if Predators were real, even they would scoff at this idea, but someone wrote a check to fund this thing, so here it is.

I have to believe that the Predator (Dane DiLiegro) in Prey is the laughingstock of its home planet and this movie depicts a prank on it. It probably thought it was going to a planet with truly awesome foes – nine-foot creatures that ride flying predators, who worship a tree, and whose tails double as their genitalia. Who wouldn’t want to hunt and slay those things? They’re really strong and kind of gross. Instead, while enjoying cryosleep, Predator is dropped on a planet to hunt silly, fragile, small bipedal beings who fling sharp sticks at each other. And the beings don’t even have tails. There is no chance the pilots of his ship weren’t snickering as they pushed the eject cargo button.

When Predator wakes up and discovers where it’s been dropped, it immediately becomes bored and depressed. Like a kid who has been bullied, Predator starts torturing and killing random animals that clearly don’t pose a threat. Eventually, Predator comes upon a bear and, rather than just hurl its metal spear at the bear or impale the bear with its wrist knives or fire its auto-targeting projectile weapon at the bear (that is inexplicably three metal rods instead of a laser weapon), it decides to wrestle the bear in a river. While the bear does give Predator a challenge and knock Predator down, Predator ultimately prevails and wonders if there is anything on the planet that will make its Predator friends stop laughing at it.

After ignoring various birds, rodents, and bison, Predator discovers humans. Specifically, Comanche warriors who refuse to believe in a young female, Naru (Amber Midthunder), trying to prove to them that she can hunt. Knowing what it’s like to have everyone laugh at it, Predator decides to hunt the other warriors and give Naru a chance to prove herself by hunting her kinsman’s killer. Unlike the other life forms on the planet, at least these things have developed crude weapons. Maybe they’ll be a challenge if Predator can get all of the warriors to attack at the same time. Even Naru might be an interesting fight, considering how well she wields her small hatchet with the rope attached to the handle.

If you’ve watched any Predator movie, you know how this is going to end. Naru will MacGyver some kind of crude trap, since there is no way for her to win a hand-to-hand combat with an eight-foot, invisible monster with crazy hair, wearing a bone mask. One of these days, Twentieth Century Studios is going to realize that maybe, just maybe, they should stop making Predator movies. If they aren’t going to stop, they should at least try to develop a series where only a handful of Predators are left because most of them have died, killed by far inferior beings, and are being hunted themselves. It might be funny if it weren’t so sad.

Rating: Definitely not worth subscribing to Hulu+ for unless you do it as a prank for someone else.