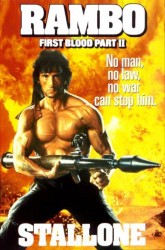 Sylvester Stallone is sixty-one years of age. A fit, rugged, manly sixty-one. But not once does he oil his chest, puff up his loins, or caress the inner thighs of his enemy. Amazingly, the more hes aged on camera, the more it is we believe he prefers the company of the dames. That said, hes defiantly asexual in this long-awaited sequel, and he just might have fewer lines of dialogue than any lead character in cinema history. At long last, though, its apparent that the genre has moved in its destined direction: as the heroes of the Reagan era age like fine wine, they struggle against impotence, incontinence, and sagging ass cheeks by killing even more people than ever before. Does an unsatisfied rod of steel seek deaths sting that much more? Well have to wait for the Cobra sequel to be sure. Still, despite Stallones uncharacteristic tucking away of the gay thing, the film manages to embrace a curious homophobia in the midst of its bloodletting. Rather than celebrate man-on-man action as the expression of the action hero, the lone overt example of queer power occurs on the bad side of the coin. The lip-smacking general (we know hes bad because he smokes and hides behind sunglasses, all with an insecure mans facial hair) invites a young male prisoner into his hut for an off-screen bout of Southeast Asian lovemaking. You know, the variety that includes threats, screams, and intimidation, all in the face of potential gunfire. As the boy leaves later that evening, he is not limping, nor is blood shooting from his rear, so its possible that the sadistic gave way to tenderness. Regardless, it speaks volumes that the most villainous lout in many a moon (he kills and kills and kills, and as a measure of his dehumanization, we learn nothing about him) is a limp-wrested faggot. Go figure: Americans leave the region, and John Wayne yields to John Waters.

Holy mother of cock, 158** Commies (along with two dogs and a fish) are cooked, fried, and sent to the grave in so many twisted ways that this entry immediately becomes one of the most satisfying action films in years. In truth, it just might stand with the champions of the 1980s, as the script makes no effort whatsoever to tell a story, create believable characters, or humanize its enemy. They say it’s Burma, but get real: this is still Vietnam. Sure, there are lulls now and again, but as the film moves towards its inevitable conclusion, it becomes utterly impossible to keep up. And while most die by gunfire, there are frequent explosions that make an exact count tough at best. (**The LA Times suggests the count is closer to 236 — perhaps we’ll never know).

The screenplay is a fucking mess, but who on earth would stand for a more reflective Rambo? Stallone makes a pitch for the Republican base by having his crew of mercenaries (including the standard bald asshole) save a group of kidnapped Christian missionaries, but just when you think it might be a soapbox for Jesus, the biggest religious nut of the bunch smashes a mans head with a rock. And he likes it! Another Christian is mocked for thanking God for her rescue, while another missionary is literally crucified and fed to the pigs. This unexpected turn — the Jesus freaks are weak and cowering, and need old fashioned muscle to save their simpering asses — helps bring the film into the realm of the revolutionary, as Rambos way — the gun — makes a mockery of the Christian method of turning the other cheek. Improbably, then, the movie is inspiring, riotous, and far more entertaining than we had any right to expect. We want death, we get it, and even the tacked on ending of Big John returning to his papas spread in Arizona feels satisfying. Not only can we go home again, but we can sleep comfortably after butchering a large segment of a country we couldnt give two shits about. And hell, how bad can a Rambo movie be that has a flashback sequence reminiscent of Rocky IV? All the greatest moments from the series pass before our eyes — and Johns tortured sleep — forcing us to our feet in rapturous applause. Chilling. Nothing directly follows death, but Stallone gives us a gem: When youre pushed, killings as easy as breathing. Also, his Live for nothing, or die for something is another slice of raw meat for the kids, despite knowing that Rambo wouldnt know a cause if it fell into his lap. He ends life because it is the only thing he knows how to do, and hes simply looking for an excuse. Theres another great retort to the a silly Christian who thanks the Lord for saving her: God didnt save you, we did. Damn right. The world will never get better until we do more killing. After all, helping the poor never produced a single erection.

Burmese politics? A local civil war that involves the slaughter of innocents? I dont care, you dont care, and the movie sure as hell doesnt. Rambo is a Vietnam vet. Always was, always will be. An Asian is an Asian is an Asian, and for forcing the United States into the loss column, they will never be forgiven. And lets face it: Rambo is pushed to fight because of white womanhood, not some pussy like Jesus, and shes represented here in the body of Sarah (Julie Benz), a silly little girl who, despite her crushing naiveté, is in danger of being raped by smaller, dirtier cocks. Think of the first killing spree: Rambo murders a boat load of Burmese pirates because they demand the woman. He would have let all the treasure go, but not the virginal princess of American purity. For Rambo, gooks can run markets, fashion killer spring rolls, and host snake fights, but stay the hell away from our women. We know Rambo means business, because we know hes not interested in the woman so much as wanting to keep her safe for upstanding young men on the home front. And we know that Sarah is being caged for later exploitation, and more than the rest of the Bible thumpers, she is the reason for Rambos rush to justice. Still, the question remains: do we get to win this time? By sheer body count alone, a case can be made for the restoration of American manhood, prowess, and moral righteousness, and yes, even Rambos return to the States could signify a victory over the past. All he needed — all we needed — was one last trip to the source of our passivity and cynicism. Dare I say it? I think were back.

It might be easier to list those that werent novelties. Decapitations, eviscerations, mutilations, and the best — people on fire – defined this movies 93 minutes, and each one of them went straight to the funny bone. And yes, we witness a good mix of guns, knives, and arrows (its good to see that Rambo is still an expert with the bow after all these years), but it takes Rambo getting up close and personal to fully realize his powers. I mean, fuck almighty, he literally tears out a mans throat! And then, by the end, he slashes the main bad guy so efficiently that his organs tumble to the rain-soaked ground. Oh, and the claymore? Didnt we have these things in Nam? And we didnt win why, exactly? The high-powered weapon, used to set off an old bomb from WWII, cleared away brush, bodies, and a few pups, but more than that, a man on the cusp of Social Security outran the blast! And I believed every waking second of it. The bad guys also played ball this time around, as they had a game that involved forcing prisoners to run to the other end of a rice paddy while trying to avoid mines the military fucks had thrown in the shallow water. As with everything, the yellow bastards bet on the outcome. As heartless and callous as the contest is, theres no denying its cool factor. And let’s not forget that children — yes, the wee ones — are heartlessly sliced before our very eyes!

Deny our enemys humanity, and well sign up for the slaughter. I know I have.