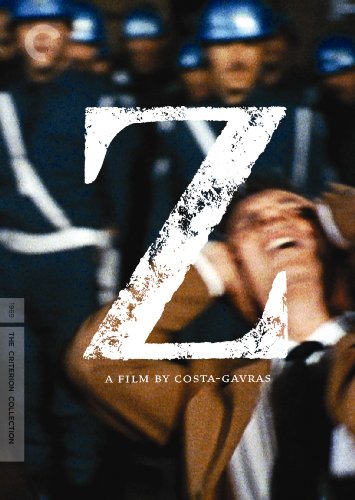 “Any resemblance to real events, to persons living or dead, is not accidental. It is DELIBERATE.”

Z is, quite simply, the finest movie about politics and political struggle ever made. With apologies to Battle of Algiers, thrilling in its own right, Z is a masterwork of satire, a vitriolic lash against the suffocating fascism which gleefully masquerades as democracy, and brimming with the sort of dark humor that thrives upon tragedy and exhilarates with disasters. The film is unique in seeming action-packed with fast-moving scenes of people who mostly talk or sit still; this is high-impact politics where two immovable objects collide and annihilate. Just as he did with the exemplary Missing, Costa-Gavras brings a powerful voice to cinema and excels at examining the difficult nature of politics while never losing sight of the human core that is crushed underneath the weight of a conflict.

The opening quote from above is only the first of many playful salvos to assure you that this is not the sort of timid work that avoids provocation to maximize the size of an audience. Loosely based on events in Greece in the 1960s, Z is meant to take place in Anynation, during any time period. In 1963, popular leftist deputy Gregoris Lambrakis was assassinated in Athens, and an investigation by Christos Sartzetakis found connections between the assassins, the police, and fascist extremist elements in Greece. The far-right government of Greece consolidated power by military dictatorship in 1967 and Sartzetakis was imprisoned. The junta remained in power until 1974 with the help of military and economic support from the United States. Throughout, Lambrakis’s memory remained fresh in the minds of the citizens, and the symbol ‘Z’ became a rallying cry, meaning ‘He (Lambrakis) is alive’. Sartzetakis became an icon of integrity, but it is important to remember that while he was imprisoned and Lambrakis murdered, they were both known as communist villains under the junta while the murderers were ‘rehabilitated’ as heroes of the nation. It only takes a bit of repetition and on-message bloviating to rend even the largest personality asunder, changing their legacy with the help of demagogues. Z is about not only the intrigue surrounding the aftermath of a political assassination, but the attempt to bury a legacy and the extraordinary sacrifice required to simply maintain the truth.

The immortal Yves Montand plays the charismatic physician-turned-politician whose is poised to win the presidential vote. He attends a rally that has been sabotaged by the police. Threats and bureaucracy have denied them a proper venue for a rally, and thugs are dispatched to ensure a violent scene that can be blamed on the communists. In front of a frenzied crowd, with a phalanx of policemen watching idly, a truck speeds into the square and an assailant clubs the contender on the head. He falls to the ground, never to regain consciousness. As the right wing government moves to cover up the incident as a drunken accident, the leftist party tries to release the information, and the man’s wife watches silently as her whole life ebbs before her eyes. Often movies that focus upon politics forget that real human lives are lost and the twisted scar of broken families is easily forgotten. It is to Costa-Gavras’s credit that Montand’s character is always at the center of the story and its outcome. He dies, and his party is prevented from making any further statements by the police. All would have been lost were it not for the work of an investigating magistrate who discovers that the autopsy shows not that he was struck from the side by a moving vehicle, but from above with a club, making murder the only likely possibility. A photojournalist uncovers the connections between a right-wing extremist group and the police, and the structure collapses in a breakneck paced procedural ending in a finale that will have any reasonable viewer on their feet as the sacred cows of the administration are indicted for premeditated murder. All of that was possible due to the magistrate being a trusted member of the legal system, and a fastidiously apolitical judge. Testimony from known leftists is tossed out as unreliable, and pressure from conservatives is ignored. He methodically builds a factual case that catches the corrupt police chief and his minions off guard. The labyrinth of lies collapses in impressive fashion as the viewer is pulled rapidly through the mess.

The film does not end there, however, balancing the relief of seeing justice done with the cold and unsentimental truth that justice is rarely complete. The magistrate is replaced, witnesses are murdered, perpetrators exonerated, and the junta takes power and bans peace movements, music, labor unions, sociology, Tolstoy, Sophocles, Chekov, Pinter, the free press, and the letter Z. The viewer is jailed in a wall of text from all those things reactionaries find so hateful. Depressingly, this is the only way events could go. Conservative ideologues, for all their bleating of democracy and freedom, have little use for either once their power is threatened.

Costa-Gavras is anything but subtle, and his dark and unforgiving tone has been criticized as the voice of a cynic. I am not sure if that is even something one can criticize in a director. Z is his most famous work, and is a gem of progressive filmmaking. Despite its expeditious pacing, it would be a distressing slog were it not for a vicious sense of humor. The film opens with a montage of increasingly ridiculous medals, all made to cover the blunt corruption and dishonor of those who wear them as talismans against their own worthless nature.The intellectual poverty of the right wing is repeatedly attacked with a series of sly jokes, starting with a rather silly and dull lecture about diseases to an administrative forum. The ‘isms’ so dangerous to deeply conservative politicians are compared to fungal diseases in crops, which must be sprayed with copper sulfate to prevent their spread. That a right-wing extremist government cannot tolerate competition from populist movements is but one facet of the commentary. That the extremists find this sort of thing edifying is funny in itself. When recalling the scene of the murder, the right-wing thugs, policemen, and politicians all use the same phrasing in a clever play upon their inability to think independently. When several of the members of the murder plot are indicted, they attempt to leave the magistrate’s chamber through a door to the left, which is locked. They are uncontrollably driven to the right whilst being photographed by the press, soon to be banned. Not the most subtle symbolism, but considering the density of these references, this quality makes the film accessible. In the final bleak aftermath scene, the journalist telling the story of the investigation (as to a television audience) becomes part of the photographs as his arrest is announced. Sardonic wit is all one has to view a tragedy in motion without becoming depressed.

Still, no story ends – not even somber ones. The junta fell eventually when anti-American sentiment and pro-democracy movements started to gain ground. Intellectuals exiled by the dictatorship, the enormous popularity of the 1969 release of Z, and pressure from other European nations opened a factional split in the junta, leading to a counter-coup, loss of support of key military officers, and a collapse of the dictatorship. That a right-wing extremist government that utilized torture and denied basic human rights (cough) was seen as an ally against Communism was embarrassing to the Western Bloc of NATO, and delayed the incorporation of Greece into the European Union. Most importantly, the history of this dictatorship stands as a reminder that such things can happen rather easily under the right circumstances. For this unfortunate reason, Z is timeless, and will never lose its relevance.