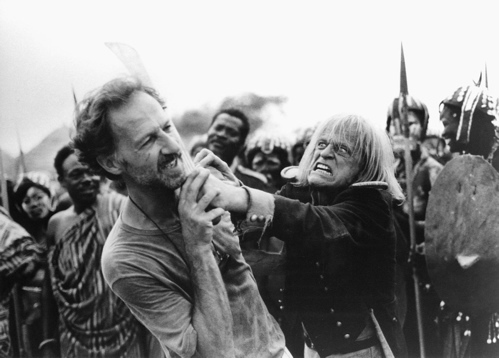 An absolute treat for any Herzog fan, My Best Fiend is as compelling as any great documentary. The film (which translates better from German as “My Dearest Enemy”) is about the brilliant yet tumultuous relationship between the great director Werner Herzog and the infamous and quite mad Polish actor Klaus Kinski. Over a fifteen year period, Herzog directed Kinski in five films–Aguirre: Wrath of God, Nosferatu: Phantom der Nacht, Woyzeck, Fitzcarraldo, and Cobra Verde. With the lone exception of Cobra Verde, which had some serious production issues (Kinski quit before principal photography was finished), the other four films are masterpieces. After watching Cobra Verde recently and reviewing it and thinking about it, I would like to change my vote. Verde is the best Herzog/Kinski film. If for no other reason than the fact that Kinski’s personality comes through more than in the other films. Anyhow, Cobra Verde, in my book, just barely inches out Aguirre. Truly exceptional genre-bending and defying works of art; works of pure film. Delightful and haunting, manic and maniacal, subtle yet incendiary… Am I talking about their films or Kinski? Both, obviously. Klaus Kinski died of a heart attack near Petaluma, California in 1991 and My Best Fiend is a gorgeous tribute from a thankful filmmaker to his greatest actor.

The opening scene of My Best Fiend is the highlight of the film. Er, not the opening scene, actually–which is quite great: Kinski is doing theater as “the real Jesus,” which mostly consists of him telling Christians to shut the fuck up and explaining that Jesus wasn’t tolerant, but rather would whip people in their ugly faces–but the scene where Herzog returns to the apartment he lived in when he was thirteen and Kinski was his roommate. The flat was a halfway house for starving artists who were left out of, as Herzog puts it, the “economic miracle” in post-war Germany. Kinski terrorized all the other roommates. I’m torn between two anecdotes; the first being when Kinski locked himself in the bathroom for 48 hours and destroyed everything contained therein to the point that one could have combed through it with a tennis racket, or the other one where a theater critic came to dinner. The critic had just seen Kinksi in a play and he described the performance as “outstanding” and “extraordinary.” Kinski immediately throws two hot potatoes and the silverware in the critic’s face and exclaims, “I was not outstanding, I was not exceptional. I was monumental!! I was epochal!!!” Great shit. In fact, if the whole of the film had just been Herzog recounting Kinski’s various antics I for one would have been quite satisfied.

The film then jumps to the filming of Aguirre, which is about as interesting as the finished film. That is to say: mind-blowing. Kinski was of course on his worst behavior. Ranting and raving constantly about every fucking thing. Herzog does his best to deny that he directed Kinski at gunpoint; a very persistent rumor that others maintain is absolutely true. Still, Herzog does admit that when Kinski told him he was quitting before all the scenes were shot, that he told Klaus that by the time the speedboat he was leaving on had reached the bend in the river, Kinski would have eight bullets in him, and the ninth would be in Herzog’s own head. Kinski, apparently, believed that Werner was serious. So, Kinski decided rather to just terrify the extras and the crew. One of the actors remembers a night when he was asleep with forty-five other extras in a hut. Kinski, for no apparent reason, fired three bullets through the wall of the hut, shooting off one man’s finger. Much more remarkable to me, was the fact that the opening of Aguirre takes place at Machu Picchu. Rather, I should say, the opening shots are of hundreds of men descending from the top of Machu Picchu. Herzog felt that including images of the famed Incan city would be too much like a commercial, too much like a postcard. I am simply amazed at the restraint shown by the director, for who could pass that up? Seriously, you are at one of the most famous and stunning location in the entire world with a camera, and you actively decide not to use the “prop” so as not to cheapen your film. I’m staggered. Kinski became furious over Herzog’s decision, however, Herzog says the real issue was that the scene infuriated the actor because it did not feature his face.

Also of great interest to me, is the recounting of the filming of Woyzeck by his costar Eve Mattes. Until she appears in the film, Kinksi is portrayed as an out of control monster. Again and again Herzog explains that Kinski simply terrorized everyone within earshot. However, Mattes states that Kinski was the model Gentleman. One of the sweetest people she ever encountered and by far the most professional actor she ever worked with. At Cannes, when she won an award and he did not, Kinski cried with joy for her accomplishment. To me, this scene, coupled with a virtuoso snippet from Woyzeck, shows just how complex, and yes–monumental–Kinski was. As fascinating and multi-faceted as any of the lunatics Herzog had him portray. Still, while filming Fitzcarraldo, we learn that a group of natives (Machiguengas) that are normally intensely gentle people, came to Herzog one night and offered to kill Kinski, so bad was his behavior. Brilliantly, Herzog opts to just let the Indians vent that anger at Kinski on film. Herzog does admit to immediately regretting his decision to keep Kinski alive… This is totally understandable, for included is a scene where Kinski goes berserk because he doesn’t think the food being provided by the production manager is good enough. For maybe ten minutes Kinski hurls forward filth such as, “You can lick my ass! I’m going to smack your face! You are pig shit!” Incredible.

For any serious Herzog or Kinski fan, My Best Fiend is simply a must see. Sure we learn that at one point Herzog was planning on “firebombing” Kinski as he slept, but we also learn that the two were not only long time collaborators, but also fast and lifelong friends. For instance, when Kinski was writing his memoirs, in the massively in-need-of-a-review Kinski Uncut he tells Herzog that he must demonize the director for no one will want to buy the book if he is nice. So, Herzog grabs a dictionary and helps Kinski find the cruelest and most vulgar words to himself. I also wonder if Kinski didn’t know a little something about how to play Herzog. As presented, Herzog basically states that Kinski was fucking insane and that he knew how to wind Klaus up so that he could “rave” for an hour or so before shooting the scene. Still, Herzog mentions over and over again how massively professional Kinski was, so maybe, just maybe, Klaus knew that he had to stress Werner out before the director could really produce. Again, I wonder. What I don’t wonder about is this film. Basically on the same plane of greatness as the five features the two produced, My Best Fiend stands on its own two feet as a fascinating monument to perhaps the most important collaboration in the history of cinema.