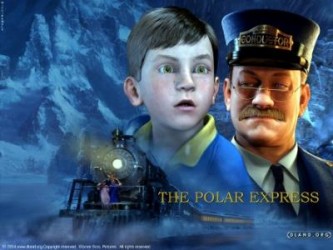 The first question is; why did an admitted child-hating secular humanist Jew with really strong pulls towards Satanism (only because it may upset Christians more than me simply being a Jew–jury’s still out) go to see a cloying, saccharine Christmas movie about a boy whose faith in Santa is renewed through “belief?” OK, one of my very best friends did some of the animation and the after party had an open bar where they were pouring quad shots of Beam–fair enough? I had about four full glasses of bourbon and ice. Plus, I kept peeing without washing my hands and giving good, firm shakes to all the Hollywood blowhards I met.

I just want to get this part out of the way up front. The train sequences in The Polar Express (or “Polex” as it is known internally) are fucking rad. For whatever reason, the train tracks to the north pole are actually in fact this psycho roller coaster with long, long vertical drops and soaring hills–totally unsafe in every way especially for a train that goes around and kidnaps kids from their home. D’oh! There I go getting ahead of myself. Anyhow, anytime we see the train barreling down the track it is pretty damn compelling. Like in Das Boot (the sub) and Star Wars (the Millennium Falcon) it is the vehicle that is actually the best character in the movie. OK, fine, Jurgen Prochnow, was pretty excellent. Still, the train sequences are top shelf and are animated as well as any scenes you are going to see. Especially when the train gets stuck on the frozen lake and the ice begins to crack and the conductor dude (Hanks) is screaming at “Steamer” (the fat engineer) to steer “LEFT!, now RIGHT!—PORTSIDE!” A very cool sequence. Plus the train sequences might scare children. Which I support. 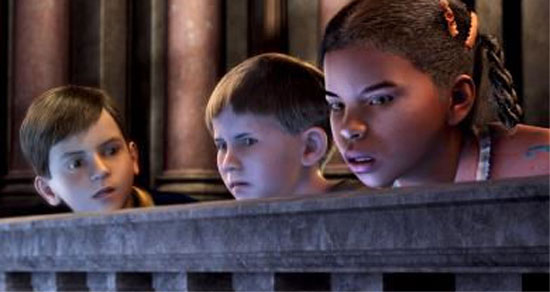 Other than that, The Polar Express is awful. My friend and I spend the last half hour making pedophile jokes about Hulk Hogan raping little kids. Loudly (keep reading). And he worked on the fucking movie! For me, the beginning of the movie was particularly nauseating. We meet “The Little Shit Who Cannot Be Named” (for some reason, only one character besides Santa has a name) deep in the clutches of greed inspired insomnia as he waits for Santa to show up. Now, I am as greedy as the next guy, so I see nothing wrong with a child’s biggest concern being the accumulation of presents. No, what sickened me was how Norman Rockwell, middle-America bullshit the intro of the film was. Snow is falling softly, Little Shit Who Cannot Be Named has a baseball, there are keyholes for him to look through, and everyone is wearing a sweater and a robe… I’m doing a poor job of describing how ill this part was, but essentially Newt Gingrich’s wet dream of Reader’s Digest circa 1955 was in full bloom. Look, I remember Christmas Eve as a child. My dad would make sure to light a fire (even though it was probably 70 degrees out) to “keep Santa away,” my mom would make spaghetti or burgers or tacos or order a pizza, my Grandmother would comment on how Meshuggah the Goyem are for Yoshkie.  My sister would make fart noises while playing piano and I would sleep outside in the hammock with a baseball bat just in case I saw that fat bastard who wouldn’t give presents to Jewish kids. Needless to say, the opening “niceties” had me cringing.

As far as the actual story… you know, it is weird because nothing really happens. I mean, there is no “goal” the Little Shit Who Cannot Be Named is trying to accomplish, save for the fact that he wants to “believe” in Santa. Anyhow, he and a gaggle of other brats get kidnapped on this train thing by Tom Hanks. “Hey there kid, want to ride my train?” Sure, dress it up as Christmas, but a man is still going around snatching up children in the middle of the night to take them away and give them presents. You tell me. Anyhow, we don’t really know why anybody is on the train or what the train is doing save for the fact that it is going to the North Pole.  Now, of course, it turns out that the Little Shit Who Can Not Be Named was abducted–I mean ”chosen”–because he was a “doubter.” Uh, so, like, the punch line to the whole thing is that Santa, for whatever reason and under unknown criteria, gives one lucky abducted child the first present of Christmas. Literally, so sweet I got diabetes.

Jut a few more thoughts; The North Pole itself really resembles a scene out of a Riefenstahl flick. Seriously, tens of thousands of dudes all dressed the same standing around in an Albert Speer style plaza waiting for “the leader” to emerge. Also, when Santa does make an appearance, we at first only see his shadow in profile. His menacing height and large moustache make him look exactly like Hulk Hogan. And really, The Polar Express would have been the greatest movie EVER MADE if it turned out that Hulk Hogan lived in the North Pole, held Third Reich style rallies and had Tom Hanks bring him trainloads of kidnapped children. I mean, fuck, could you get more brilliant? Probably not. In other news, the kids looked like zombies half the time. Man, how cool would it have been if like five kids ate Tom Hanks? Also, I am pretty much convinced that Hanks chose to play nineteen different characters so that he could constantly be in the presence of abducted children. Think about it; you know he did. Long and hard.