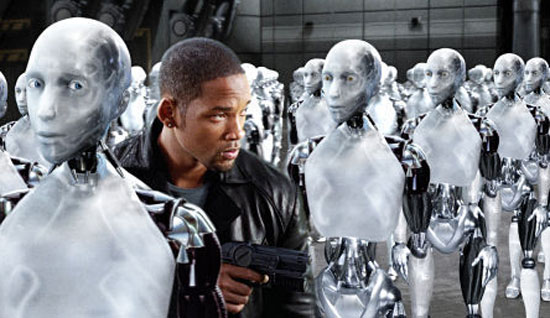 I just watched I, Robot and boy was it better than I thought it was going to be. I assumed it was going to just be another
uber-hollywood CG fest with no soul. However, there is a pretty decent
film laying under all that green screen. Mixing some of the basics from
Isaac Asimov’s collection of stories and Will Smith’s “bling ’em”
attitude, director Alex Proyas (The Crow) does an admirable job.
The effects, while ever present, are good enough so as to not induce
epilepsy. I even really liked how the robots looked. Just not quite
human. But, they could emote. And they weren’t very loud, which I
liked. Also noteworthy is that the other lead, Bridget Moynahan, is
extremely attractive. I liked that, too.

Basically, the robots have three rules or laws that govern them. And yes, I’m paraphrasing:

I. Through action or inaction, a robot may not harm a human being.

II. Robots must follow all instruction given by humans unless it
countermands law one.

III. A robot may function autonomously as long as it does not
countermand laws one and two.

There’s this big brain robot named VIKI that realizes humans are
killing themselves through the usual ills of war, pollution, etc. So,
it looks to law
one, specifically the part about robot inaction and decides to
take
action–saving humans from themselves. Which may lead to some loss of
human life, but it is going for the greater human good. The movie
terms it as, “the created protecting the creator.” Of course you don’t
learn any of this until the very end, so I spoiled another one for you!
I, rule! And fine, I’m pretty drunk. 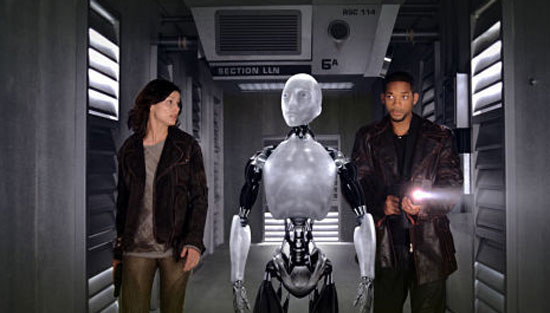 Smith is Detective Spooner, a “loose cannon” type of cop who
totally hates robots for some reason. Like, he’s the only person in all
of Chicago who mistrusts them. He spends a lot of time saying, “Oh,
hell no.” But, there is a certain charm that Smith can bring to a
character that is fun for the viewer. I’m thinking of him in Enemy of the State, not Men in Black 2,
which is death for the viewer. Detective Spooner is investigating the
apparent suicide of Dr. Alfred Lanning (James Cromwell), but he
suspects foul play on account of the fact that he hates robots so damn
much. He gets paired up with his polar opposite, Dr. Susan Calvin
(Moynahan), who totally loves robots. It is implied that she even has a
robot boyfriend. If you were wondering, no, there is no romance between
the two as Hollywood is still too squeamish/lame to show a black man
kissing a white woman in a summer blockbuster. Think Terrell
Owens/moron from Desperate Housewives uproar. There’s even a
scene where she’s rubbing his surprisingly buff chest and practically
creams herself when she finds out he’s half robot (oops! Another
spolier. Get fucked) and still no kissing. The lack of any kissing
and/or fisting is doubly lame as the movie is set in 2035.

Anyhow, the two of them are trying to figure out just what the
hell is going on because Spooner has a very personal connection to Dr.
Lanning, and the late, good doctor thought of Calvin as a daughter.
Enter Sonny. Sonny is a one off robot built by Dr. Lanning to not only
have emotions, but to be able to keep secrets and dream. He’s also got
“denser alloys” than the other robots. Spooner of course hates his guts
cause, well, he’s a robot. Noticeably absent from the film is the
ironic prejudice that a black man shows towards another, uh,
species. But no matter. Turns out that Sonny was built for a very
specific purpose that slowly becomes more and more clear to Spooner. I
gots to mention the Stupid Chief played by Chi McBride (Boston Public).
At one point, after the worst CG part of the film (the car chase where
9,000 robots jump on Smith’s car and the same car starts spinning in
headache inducing circles at 125 mph), the Stupid Chief asks Spooner where his gun is. Turns out one of the robots took it. Immediately the Stupid Chief asks for Spooner’s badge. Ha! 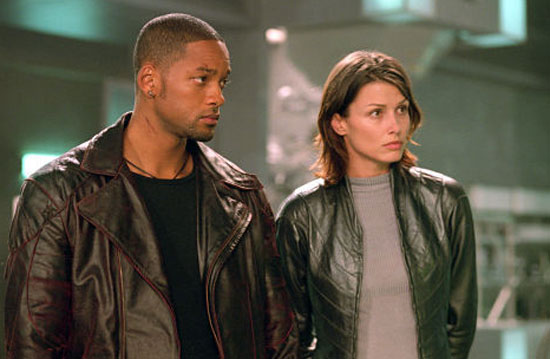 Against all odds (and the Stupid Chief), Spooner and
Calvin and Sonny defeat the mega-computer gone bad (VIKI), prove that
robots can be dangerous and… you know, typing this I am wondering why
I liked this film as much as I did. Oh yeah, cause it is pretty good
and the underlying “message” is fairly thought provoking. Unfortunately
the screenwriters wussed out and went with a formulaic ending. The one
in which nanotechnology and machine guns are used to defeat thousands
of crazed robots. What would have been cool is when VIKI explains how
she is saving humans from themselves, Spooner would have been like,
“Shit. That makes sense. We’re a fucking near-failure as a species. How
can I be of service?” But like, you know that’s not going to happen.
Ever. Still, I, Robot was a good looking sci-fi/action flick that made me laugh a lot, think a little and almost cry at one point. Stupid beer.