IF CHINS COULD KILL – BRUCE CAMPBELL

I really don’t give a fuck about celebrities and their lives. Well,
that’s not totally true. I wish the lives of some celebrities would
end: GW, Madonna, Blink-182. But the point here is that I’ve only read
two biographies of actors. The first is Klaus Kinski’s explosion of
debauchery, Kinski Uncut. I’ll review that one someday, but for
now I’ll just tell you that it makes Wilt Chamberlain’s autobio look
like it came from Robert Schuler. Wait, I have to mention that Kinski’s
greatest sexual experience happens with a seven foot tall, Indian
prostitute. Amazing.

So anyway, Bruce Campbell is one of my favorite actors. Not the best actor in the world, mind you, but a favorite because: 1) He’s kind of an underdog. If you’re a fan, you can see his guest spot on “The X-Files” and be like, “thataway Bruce.” 2) He brought as much to the Evil Dead
trilogy, by which I really mean Army of Darkness and Evil Dead 2, as any other actor I can think of has brought to any other series movies.

That’s a strong statement, so I’ll qualify it. I don’t mean that Bruce is better in Evil Dead 2 than De Nero is in Raging Bull. I mean that no film depends more on its star to achieve classic status than the Evil Dead films depend on BC and that no human being – De Nero, Robert Duval, Arnold or whoever else you want to name – could have been half as good
in the role of Ash as is Bruce Campbell. I love Ash, I love the films,
therefore I so love Bruce Campbell that I read his book even though it
contains no accounts of sex with giantesses.

It does contain an account of Bruce’s childhood – a perfect
example of why I don’t read books about the lives of celebrities.
Little Brucie does this and that and it’s supposed to be interesting
just because little Brucie will one day become the mighty Bruce
Campbell. The only striking thing about this part of the book is how
the sort of childhood behavior that is now blown out of proportion was
just as common in the 1950’s, at least in Campbell’s life. One brother
stabs another with a screw driver, a 12 year old girl charges her male
classmates cash for feels – it’s the sort of stuff that today gets
picked up by wire services or put on talk shows, with the aim of
depicting the decay of society, although it’s just normal.

Luckily, the family history is covered in one chapter and we
jump to the entertaining stuff immediately thereafter. Bruce makes some
silly movies in high school with his pals, including Sam “I Directed Spiderman” Raimi. The friends putz around aimlessly for a couple few years after graduation, make two, shoestring films for Michigan State students, then decide to make a real film. Sam cooks up Evil Dead. 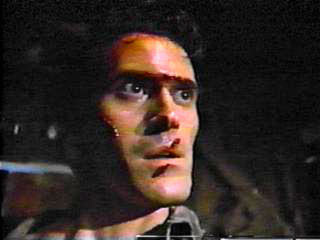 When I was in junior high, I read the autobio of Wayne Gretzky. The most frustrating thing about the book was the secret to Gretzky’s greatness: from early childhood he practiced nearly every waking minute. How did I spend my
time at the same age? Mastering “Mike Tyson’s Punch Out” on Nintendo.
That was the biggest difference between me and Wayne. It would have be
a lot easier to swallow if his greatness had come easily because then
my laziness would have been justifiable.

The same thing applies to this story. How did some loser kids from Michigan produce a film that (eventually) mad a pile of money and launched some of them into successful film careers? They worked their asses off, raising money
from family members, dentists and anyone they could talk to. Then they
worked their asses off on a miserable, under-funded shoot. Then they
worked their asses off finding more money for postproduction and then
finding a distributor. Years of toil that, by all reasonable
expectations should have been utterly fruitless, paid off in the end.
Why aren’t you where Sam and Bruce are? The biggest reason is probably
that you haven’t worked hard enough.

I’m making this thing sound like Ray Nitschke’s book . If Chins Could Kill is a tale of success by persistence, but is also an entertaining, funny look at the entertainment industry from the fringes. Campbell is a down to earth guy with a quick wit living in the unusual world of film. That makes for some fun reading, whether he’s talking about the hardcore
fans: The Deadites, or auditioning for a “big break” type role as The
Phantom. Bruce’s thoughts on his experiences in Hollywood are typified
by this one: “Ironically, this immersion into cheesy genre flicks
rekindled my interest in independent film making. If these morons can get money for their films, I thought, so can we.”

Pretty funny, but what’s funnier is that this is the next paragraph,
which reveals Campbell’s idea, as opposed to those “moronic” ones he
was talking about. Campbell’s own amateurishness along with his
willingness to ridicule his supposed betters is the essence of the book
and it is captured here. So after the bit about the morons, Campbell
writes,

The following three months led partner David Goodman and I on a trip down Nightmare Lane trying to finance Man with the Screaming Brain -a sci-fi/horror flick that’s basically Body Heat with a brain transplant.

Again, it’s not quite sex with giantess, Indian prostitutes, but it is an amusing read.