EMPEROR OF THE NORTH POLE 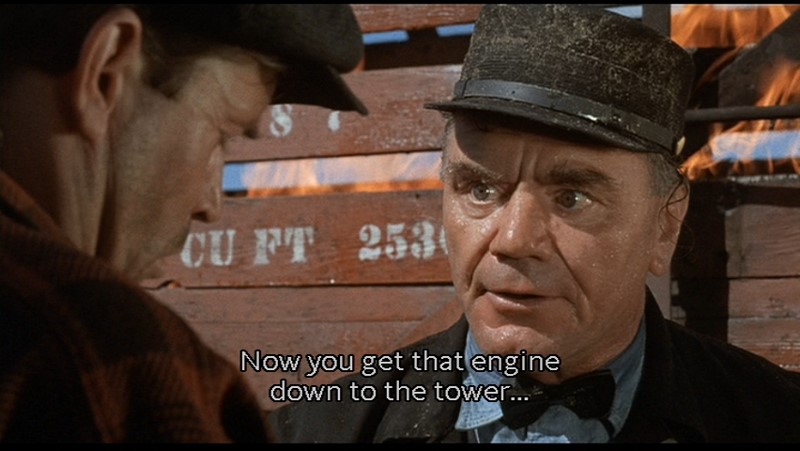 High Plains Drifter has always been not just one of Ruthless’s favorite films, but one of my personal favorites as well. I mean, the very tone of the movie strikes me as awesome. Specifically what I love about Eastwood’s masterpiece (besides painting the town red and renaming it “Hell”) is the opening. Erich discusses this in his review and I concur; killing three men and raping one woman in the opening five-minutes is pretty damned hardcore. While no one gets raped, the opening five minutes of Emperor of the North Pole are intense. Ernest Borgnine beats a hobo in the head with a hammer, causing said hobo to fall from the train and get cut into two pieces, and Lee Marvin kicks three kid’s asses with a chicken. Yes, a chicken. Pretty fucking amazing.

Welcome to the insane world of Great Depression-era America. Borgnine plays “Shack” the meanest, murdereringest train-man in all the land. No one rides his No. 19 train and lives to tell about it. Cause Shack hits them in the head with a hammer. I mean, really, Shack is like the most sadistic motherfucker I have ever seen in a film. His entire life consists of nothing but hitting hobos in the head with a hammer. It was like an LAPD documentary. Borgnine is PERFECTLY cast as an out and out maniac who only lives for hurting people. His eyes man… amazingly evil. When Lee Marvin lights part of his train on fire, Shack is pissed off at the guys putting out the fire. That’s what an asshole he is. 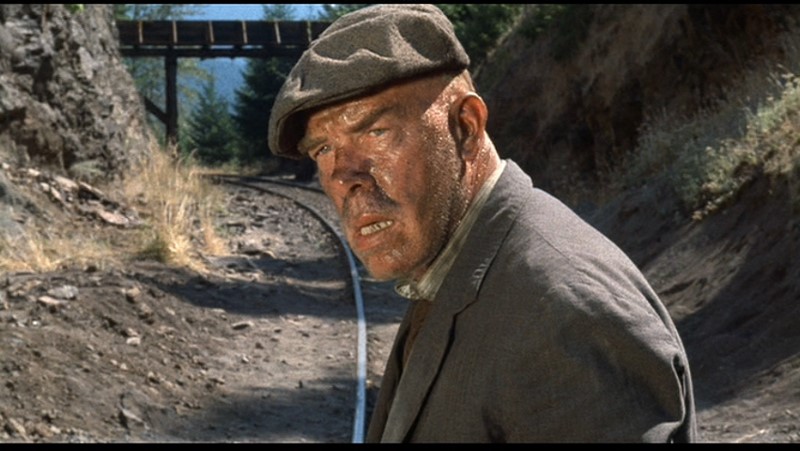 Enter “A No. 1,” Lee Marvin’s king-of-the-tramps character. He’s the greatest bum in America. And to prove it, he’s going to ride Shack’s #19 train all the way to Portland. And that will allow A no. 1 to keep the title of “Emperor of the North Pole.” Apparently, in depression-era America that is a really good title to have. I’m sorry. It is hard for me to write a really serious review of this film. Emperor of the North Pole, while absolutely worth watching, is just a weird fucker of a film. I mean, it is two hours of Lee Marvin fighting Ernest Borgnine on a train. Yes, the ending where Borgnine has the chain and Marvin the axe is a fucking classic, but…

Think of Emperor of the North Pole as Jaws in reverse. Instead of the shark attacking people, the people are attacking the shark! (Yes, I am fully aware that at the end of the picture, people go and attack the shark… but the shark still attacks the people who are trying to attack the shark! Just like this film…) A friend of mine suggested that the film is an existential journey, a discourse. I countered that it was Lee Marvin fighting Ernest Borgnine on a train for two hours. Hence the difference between folks who went to grad school (him) and those who dropped out (me). Marvin does befriend a kid (Carradine) named “Cigaret” (one ‘t’) who he tries to show the ways of the hobo to. Stuff like greasing the tracks to slow trains down so they’re easier to jump on to. Cigaret don’t listen, though. And there are more bizarre monologues in Emperor than there are in The Usual Suspects, but forget all that. You watch this movie to see Borgnine and the maniacal glee in his eye as he beats people in the back of the head with a hammer. Trust me. Lee Marvin might be in the movie, but this is Ernest Borgnine’s movie.

Oddly, this movie has been marketed by the alternate title “Emperor of the North.” While nowhere near as clunky as the original title, I feel that the awkwardness really adds to the overall bizarreness of the film. Seriously, I’m not even sure what I watched; I liked it, though.